I Don’t Usually Talk About Other Women… 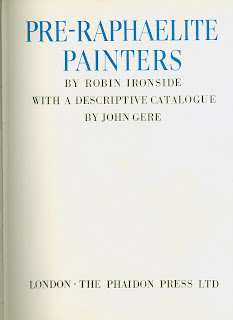 This fine book set me back the handsome sum of about £8 (steady now) and is from 1948. Part of the reason I wanted to see it was that sometimes you can find unusual paintings illustrated, things that were known at the time but have fallen out of favour since. Mostly, I wanted to see how the Pre-Raphaelites were judged during the period of their ‘exile’, when they were out of fashion.
To start with, it is a beautiful book and well worth the money. Mostly illustrated in black and white, with very few colour plates, it has good information in the catalogue by John Gere and the plates are a decent A4 size each, with some plates of detail. The big name paintings are all listed, with some predictable plates attached, but also there is a few unusual artists named that I was surprised were labelled Pre-Raphaelite, such as Thomas Seddon. Unsurprisingly, out of the 24 artists surveyed 23 are men. We are talking a pre-Feminist period of history, and it is a reasonably short book so I was surprised even one of the artists was a woman. To my shame I was even more surprised when I saw who that female artist was. It wasn’t Fortescue-Brickdale, it wasn’t Louise Jopling, it wasn’t Joanna Boyce or Rosa Brett or Evelyn de Morgan. It was, of course, Elizabeth Siddal.
Upfront and cards on the table, you know me, I’m Fanny Cornforth’s apologist and my opinion of the other women in Rossetti’s life is entirely coloured by my work. Recently someone asked me what the big deal about Elizabeth Siddal’s art was and after my three minutes of struggling silence they said ‘Thanks for clearing that up…’ When I discovered that in 1948, Elizabeth Siddal was judged to be as important as F G Stephens or Simeon Solomon in terms of Pre-Raphaelite legacy (one illustration each), I eagerly read the text that accompanied her catalogue entry. It seems that in 1948 John Gere was as puzzled as me…so I began to think about it...
Elizabeth has one picture in the catalogue, Clerk Sanders (sic)...
It’s a fair example of her work, misleadingly simple-looking but with such a range of layering of objects in the room and a tunnelled window with a view of outside. Although the black and white lends it clarity, in colour it comes alive…
﻿ 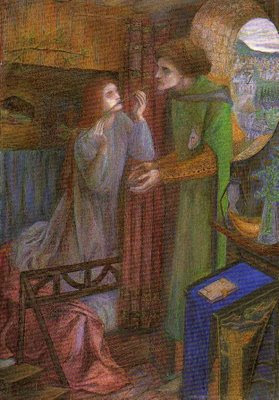 She understood colour, I’ll give her that.  The muted green and red bisected by the mustard yellow are foregrounded by a striking lapis blue which is tonally echoed in the woman’s dress and the wall behind.
﻿ ﻿
Each of her paintings are like little jewels, precious gem-like colours leaping out of medieval scenes and drawing you back in, and the details she put in are amazing. The half-seen vase, the bottle-bottom glass window, unnecessary but adding to a scene she is creating.
John Gere is tough on the only woman at his party. He gives a dismissive sweep to her art and poetry, regarding it as derivative of Rossetti during the same period. He also deems Walter Deverell's discovery of her to be 'perhaps his most important contribution to the Pre-Raphaelite Movement.' Well, ouch for him. It is interesting to note that Gere regards the 1850s as Rossetti’s best years, and that his work went down hill with the advent of Fanny Cornforth (not mentioned by name but by inference) (yes, I am really cross with him). It is a common complaint of Siddal’s work, with people going as far as to suggest that her work is in fact Rossetti's, but how true is it?
Exhibit 'A' is A Christmas Carol by Rossetti. Actually, I had a bit of trouble remembering a ‘medieval’ painting of Rossetti with the same inside-outside perspective of Siddal’s work as he does outside or ‘flat-backed’ inside, excuse my generalising. Okay, well on the face of it, yes there are similarities, but then there would be, surely, Rossetti gave Elizabeth art lessons. Elizabeth learnt to paint from a man who did watercoloured mediaevalism, so she embraces the idea of mediaevalism in watercolour. 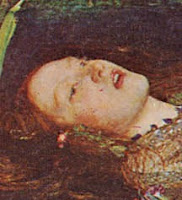 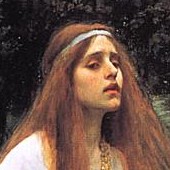 Here is what I think, and I am treading with care and respect… Siddal’s work is not like Rossetti’s any more than Waterhouse’s work is like Millais’. No-one ever accuses Waterhouse of being a copycat, do they? I always see similarities between Waterhouse’s Lady of Shalott and Millais’ Ophelia, it’s the facial expression of a woman embracing death, eerily alike. Do I think any less of Waterhouse’s work because I can't help but see a link between his and Millais’? Do I dismiss Waterhouse because I would happily argue a strong influence from Millais early work and style? Of course I don't, I just love it all.
Does the fact that Elizabeth Siddal is a woman come into this? Hard to say, and far too easy to say yes. In the whole Evelyn de Morgan/Burne-Jones argument, you do get the impression that her gender leaves her in a weakened position, and I’ve never heard the Sandys/Rossetti argument so vehemently argued as the Siddal/Rossetti case, even though there may be more grounds to say that Frederick Sandys was pinching from Rossetti’s style and source book.
﻿ ﻿
﻿﻿﻿﻿﻿﻿
﻿﻿﻿﻿﻿﻿﻿﻿﻿﻿﻿﻿﻿﻿
﻿﻿﻿﻿
Maybe it’s her perceived lack of formal training that leaves her open to claims of plagiarism. If common myth is to be believed, she learnt to paint between sittings for her obsessed lover, ignoring the trips she made to Sheffield and Derby to further her craft.
I think of all her images, I find Siddal’s self portrait the most interesting, especially in comparison with Rossetti’s portraits and the photos we have. Above is my favourite of Rossetti’s pencil sketches of her and I think it is among the finer pieces of his work during this period. I think he was correct in his claim that she brought something out in his work that was amazing, and this picture shows such depth of beauty and tenderness it could make you cry. Siddal’s image of herself is devoid of romance and tenderness. She has startling hair, which she highlights with the use of green in the background, but her face is tense and silent. The photograph shows us an image somewhere between the two, her response less withdrawn than the self-portrait, but I think I understand the difference. If her self-image carried a layer of self-depreciation it is possibly because this is how she saw herself. Whether or not she understood that it was not how others saw her is beside the point. One is a picture of what it was like to see Elizabeth Siddal. The other is a portrait of what it was like to be Elizabeth Siddal.
OK, so here’s what I think, finally… Unless you make the time to understand Elizabeth Siddal, it is impossible to comprehend her artistic work. John Gere resorts to saying that there is something about her, but he doesn’t know what, which is a remarkably honest admission. For a lot of people it would be easier to believe she peaked in 1852 in a bath-tub, but her work has interest and beauty different from her lover and teacher’s work. Her pictures seem to have remarkably intense emotions and they have a hushed melancholy that begs questions of the creator.
Maybe the reason why John Gere included her in the 1948 book is because we had yet to get into the idea that looking at someone’s sex life constituted sufficient biography. In my humble opinion, the thing that occupied the majority of her time should be listed first, so I would describe Elizabeth Siddal as an artist and poet, who was also Rossetti’s lover.
After all, there are more interesting things to think about than other people’s sex lives…
Posted by Kirsty Stonell Walker at 16:27