Here we go again with our second EDM book review - does this make September 'De Morgan Month'? Autumn does seem a rather good month for her for some reason, I suppose because it's close to her birthday and the idea of things passing, dying, sleeping, is a recurrent theme for her works, as we saw last week in her poetry. Anyway, lets crack on with this gorgeous new catalogue that will accompany the exhibition over at Delaware... 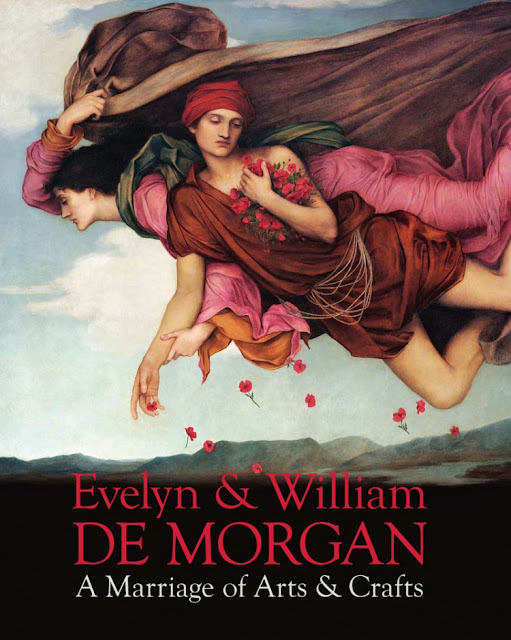 So, the exhibition at Delaware Art Museum is billed as the first every retorspective of their combined artistic output and relationship and I like the idea of putting people into context. Similar to the Tate's Rossetti family extravaganza next Spring, it is good to see  the landscape of creative people's lives, especially if they are surrounded by similarly creative souls who would invariably influence them (and vice versa, obviously).  In the case of the De Morgans, it's always been said that William pottered because Evelyn earned the money, but the depth of their creative and intellectual connection has never been explored before to this extent.  There are many reasons to love the De Morgans, not least because they had a happy marriage, but they shared so much of the external stimuli for their art, it's a treat to see them examined together.

This is a proper whopper of a catalogue in hardback and absolutely beautiful inside.  It is a collection of essays rather than a straight catalogue of the exhibition, and as such can be enjoyed without having to see the accompanying show (especially if you are pining on the other side of the Atlantic like me). Edited by Margaretta S. Frederick, the Annette Woolard-Provine Curator of the Bancroft Collection at Delaware Art Museum, there are many essays on all aspects of the De Morgans artistic, cultural and political lives by some very well known and well respected names.

I must admit, I really don't know that much about WDM beyond his pottery involved fantastic beasts, chatty looking ducks and the occasional socially awkward Dodo. He's also on a pub sign in Chelsea looking a bit like a really haunted zombie, but that's it.  What I didn't realise was that he designed stained glass (which I do now thanks to the essay from William Waters and Alastair Carew-Cox). Also, I hadn't really thought about the connection between his mythical creatures and the dragons and serpents that are often wriggling around the canvases of EDM...
Symbolism and the War are both covered by excellent essays, and make you think about EDM's response to the First World War as a spiritual battle rather than purely physical. Also, one of the things that always attracted me to EDM's art was her blatant feminist stance.  Thinking about it, there are not a vast amount of men in her art compared to women and it often feels like a conversation about the position and experience of womanhood amongst women.  Possibly this is what placed her in the conversation around queer art back in 2017 and the Queer British Art exhibition at the Tate.  I'm not the biggest fan of labels (having been given a few in my time) but I rather like the idea of the conversations of women with women through art.
Being the sort of historian I am, I really enjoyed the essay on the De Morgan's friends and family by Judy Oberhausen and Nic Peeters, because obviously the De Morgans were surrounded by talented, artistic people and drew inspiration from their own families. I also enjoyed Jan Marsh's essay on EDM's relationship with Italian art, as Italy is a vital part of not only the De Morgan's story but so many of their peers.
I don't know enough about WDM's literary career (beyond the fact that he had one) and so Diana Maltz essay is very welcome and makes me curious to read one (God bless Archive.org for that) and I'll find out Joseph Vance.  It is the sort of book that makes you realise how much there is still to explore and investigate and how rich and varied peoples lives and careers can be.
This is a glorious book, filed with fascinating insights into a truly talented couple.  The illustrations are plentiful and beautifully reproduced, and the essays are all brilliant reads on some of the aspects that made the De Morgans such a powerhouse of thought and creativity. Whether you are just discovering the De Morgans or are familiar with their work, this is the sort of book that brings a lot of knowledge beautifully wrapped. I'm sad I won't get to see the exhibition but this is the sort of stand-alone book that will remain a set-text on the couple from now on and so treat yourself to a copy to brighten your autumnal days and warm your winter.
The exhibition travels to venues in America over the next year and information is available via the link above.  The catalogue Evelyn & William De Morgan: A Marriage of Arts & Craft is available now from Amazon and  all good book sellers.

Posted by Kirsty Stonell Walker at 15:56