Except Everything You Had And What Was Left After That Too

Another title for today's post could be 'a painting and a dance and a silent movie' as that is where we are going with this one.  It all begins with this mysterious painting... 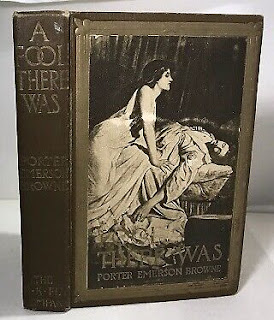 By the way, should you be tempted to read this pot-boiler, it's free to download from Archive.org. The play of A Fool There Was proved popular, weaving a whole story around the single image. This seems to have led to the 1913 film The Vampire, a story of a man who loved a heartless woman but sees her for what she is after witnessing Alice and Bert doing their Vampire Dance. A little over a year later, the Fox Corporation went one step bigger and better with their epic A Fool There Was (1915), which can be watched on YouTube and is notable as the debut of the incredible Theda Bara... 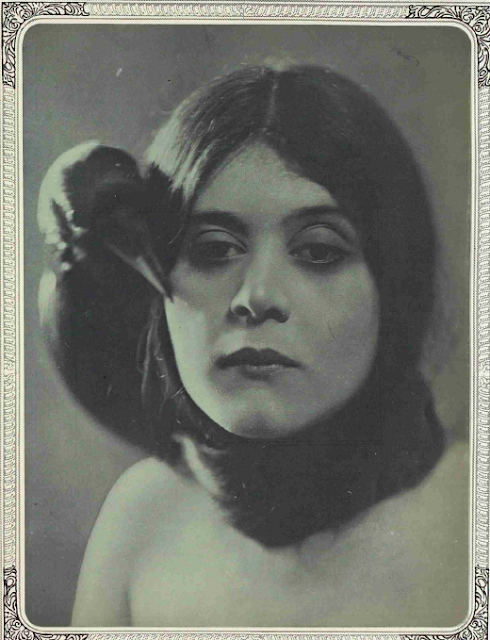 Sweet heavens above, what is going on there? I want to be her when I grow up so I need to buy more eyeliner. The plot of the movie (spoiler alert) centres around a happy family man and diplomat who travels from America to England by boat, meeting the mysterious vampire woman (or 'Vamp' as it became) on the way.  She seduces and ruins him, and it all ends badly for him but she doesn't give a flying fig because she's so very wicked...
I really enjoyed watching this and has led to a new description of a dead person as being 'deck noise' after the suicide of Theda's first lover on board a cruise ship being dismissed as merely 'deck noise'. The moment when the vampire temptress murmurs 'Kiss me, my fool!' to her victim became a sensation, and the contrast between Theda's vampire and the good wife who sticks by her husband and refuses to divorce him is blatent, although Theda does not get her comeuppance at the end (hurrah!).
In conclusion, taking the painting first, it seems to have had an interesting fate.  For a work that was so modern and successful around the world, it seems to have vanished. I have contacted the Vanderbilt collection to see if they can shine any light on it but if anyone knows where the painting is, please give me a shout.  There seems to be no colour images of it, only hand-coloured ones.  In many ways, it really wasn't that revolutionary, with clear predecessors in the works of Philip Burne-Jones' father and others like Solomon J Solomon.  Solomon's Delilah looks uncannily like Theda Bara almost 30 years later. I find it interesting to see how the meaning of the image shifted quite quickly from blaming the wicked lady for ruining a good man to blaming men for succumbing to temptation.  By the time of the movie, the 'Vamp' as she became known, could represent any destructive force, such as gambling or drinking, and the man is to blame for his downfall.  Obviously, Theda Bara was extremely attractive and there is a sense that she holds him with her supernatural sexiness and flimsy nightie, but there is a sense that this is a cautionary tale to be on your guard and your ruination is not inevitable, although the better the man, the more targetted for corruption he might become.
There is also a thread to all variations of the vampire tale  about the dangers of women discovering how much fun sex is. Taken literally, if a woman is a willing and enthusiastic participant in sex, then it will destroy men.  Yes, these women are seen as morally corrupt, but in every version of the tale, the woman is triumphant and moving on to her next victim, with barely a backward glance. In Burne-Jones' painting, she has killed the man and doesn't care. In the 1915 film, Theda Bara crumbles roses in her hands, scattering them over her victim, which would be very much understood as the destruction of romance.  Women like her don't want romance, they want your money and your physical ruination, sex without emotion. Forgive the generalisation, but that is traditionally the man's stance, as expressed by Mr 50 Cent in his song In Da Club - 'I'm into havin' sex, I ain't into makin' love', and so if women start encroaching into that where will it stop?  They'll be wanting the vote next...
In conclusion, if you are man, especially one on a cruise ship, and you don't want to end up as tragic 'deck noise', I'd avert your eyes from any saucy minxs who look like they want to drain your resources. The women are coming, brace yourself and keep your hand on your sixpence.

Posted by Kirsty Stonell Walker at 16:13