Monday 9th December - Recalling the Past

A new week and yet more misery to be uncovered!  Such a jolly prospect, certainly enough to keep us going as we write our Christmas cards.  Who is this card from? Oh no, I had forgotten incident at last year's Christmas party!  Too much mulled wine, mistletoe and dancing...


Okay, so I think this lady is depressed about more than popping out of her corset top in front of Bob from Accounts during some high-spirited dancing to Step into Christmas.  We've all been there.  She has found some letters which she has tried to throw away but ended up reading.  The misery they have inspired has been enough to knock the pillow off her chair.  Is that a pillow? It nicely matches her collar, whatever it is. 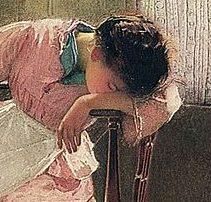 Okay, do we have to guess what has occurred by the clues in the picture?  We have a sobbing girl in pink, some letters, some beads in a basket and some horns.  So, is she thinking about a lost love?  The pink of her dress draws me to think it is a youthful love - I think if they had been married, she would have still been wearing black as is traditional in paintings of grieving widows, especially young ones.  So, a youthful dalliance that went wrong? The quality of the image is a bit fuzzy but I don't think she is wearing a wedding ring.  I wonder if she is therefore a spinster daughter, living at home having let her chance of love escape.  All she has to look forward to is becoming as dried up as those grasses in the vase on the mantelpiece. Charming.

Those coral beads in the basket give me pause too - coral has the meaning of modesty and happiness, but also in mythology coral came from Medusa's blood, which turned seaweed into coral.  Maybe our girl was too modest or had the unfortunate habit of turning her suitors into stone.  Coral also helps with bladder stones too.  None of that is going to get you a husband.

As for the horns, well what do we make of those? My Great Auntie Ev was given some horns when she left service in a big house.  I'm not entirely sure what the family thought she'd do with them.  They currently hang above my Dad's fireplace because you need somewhere to hang the tinsel at Christmas.


The thing I am left fixating on is the poker.  While fairly innocuous, it seems to pull away from the stand.  At first I thought it was the stand's shadow but it is a slightly different shape and at a funny angle, so it is definitely a separate tool. I remember my grandma's fire tools all shiny and hanging in a neat line, whilst this is leaning towards the fire.  Does it want something destroyed?  Is that where all the letters will end up because the basket cannot hold the misery of her past failed love affair?  At times like this, wicker doesn't cut it.  Fire, and plenty of it will sort that out.

Have a good day recalling your traumatic love affairs and I will catch up with you tomorrow...


Posted by Kirsty Stonell Walker at 16:17