Folly and Learning Often Dwell Together

Now and then I see a painting which so grabs me with its dense symbolism that I have to sit and unpick it.  We all enjoy being grabbed by the dense symbolism sometimes, so I thought we could have a look at a mighty fine painting and share a bit of gossip and speculation.  Marvellous, let's crack on...


Well, this is a curious picture, with an odd title and uncertain dating from an artist with an interesting life.  How could I resist?  Let's start with Mr Moser...


Robert Oswald Moser was born in London in the early winter of 1874 to a frankly enormous family.  As one of ten children, his twice-married father must have made a decent living as an iron merchant to be able to afford his sizable family.  Named after his father, Robert, it's perhaps unsurprising that the young art student was soon known as Oswald (to save confusion round the dinner table if nothing else). He studied at St John's Wood Art School before enbarking on a career that saw him exhibit 32 times at the Royal Academy and 10 times at the Paris Salon, where he won awards.  He was a member of the Royal Institute of Painters in Watercolour and the Royal Institute of Oil Painters.


During the First World War, Moser served in the Royal Navy and was placed in the camouflage department based at the Royal Academy.  He worked under marine artist Norman Wilkinson and developed 'dazzle' paint schemes for ships.  I'm a massive fan of 'dazzle' camouflage which looks absolutely barmy but works a treat for breaking up the outline of a ship, making it a hard target.


Amazing, however that doesn't help me with that strange picture we began with.  Mind you, Moser worked alongside this lady in the Dazzle Department (I would love to work in the Department of Dazzle, that sounds amazing)...


Agnes Marjory, or Margo, Murray was a fellow artist who met and married Moser before the War.  Fourteen years his junior, she was 22 to his 36 in the 1911 census return, just months after their marriage.  Interestingly, Moser is listed as 'artist' in the census, whereas she is tellingly listed as 'nothing', which is just charming.


Working alongside her husband on dazzle, Margo also gave birth to their daughter Denise in 1916 and travelled with her work, visiting France, a country she knew fairly well as her mother and at least one of her siblings had been born there.  Even after the war Margo continued to visit France, and in March 1920 she went over the channel on 'business' and never returned.  Turns out her 'business' was funny business with a gentleman called Robert Durand. In her letter home, she urged her unfortunate husband "All I can hope is that you will take the necessary steps and divorce me."  That he did, uncontested in the following year.


So, back to our original painting, and it is one of Moser's Medieval fantasies, like The Dwarf from 1920. You'll see that Moser included a self portrait in the left, and possibly one of the women is the erstwhile Mrs Moser.  Looking at the subject, I wonder if Folly and Learning... is from the same time, but possibly after 1921 for the following reasons.

Let's start with how Folly is portrayed as a woman and Learning as a man, and also how young the woman is compared with our learned old sage.  I wonder if that is a nudge towards Moser and his younger wife?  It's hard to tell if the figure of Folly is a portrait of his wife, but it's not a reach to say that Moser did not think his wife's actions to be particularly sensible.  I also wonder about how women were perceived in the light of the War in general.  It's not something I have read much about, but I sometimes wonder if there was either conscious or unconscious judgement of women after the First World War, which was a rather male affair.


You can understand, if not agree, that women and men might have had an odd relationship after the men returned from France in 1919, so images like Nevinson's rather agressive War Profiteers possibly speak of a frustration that 50% of the population seemingly had a much different war. Of course this is nonsense as women were there as nurses and Mrs Moser's war was much like her husband's, but collective perception is different from individual.  Anyway, back to our painting.

Take a look at the windows behind the figures.  On the side of Learning we have what appears to be George and the Dragon, but the open window behind the woman has a figure and a tree which could be Eve and the Tree of Knowledge, again a judgement on a 'foolish' woman.  I am slightly puzzled by is the open window though; does it imply that Folly is not going to be applying herself to anything but instead will be daydreaming?  Or possibly that Folly is the outside world, and Learning remains inside, in his own little world of books and devotion. 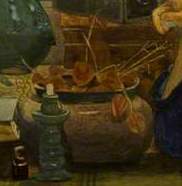 You know I love the language of flowers and we have pink roses behind Folly, representing love but between the figures is a bowl of teasels, which represent hatred.  Quite what Moser was implying about his feelings towards women I think is obvious, but the teasels are somewhat haphazard and tumbling out so it could be the 'hatred' is not a certain emotion, just something placed there by Folly. 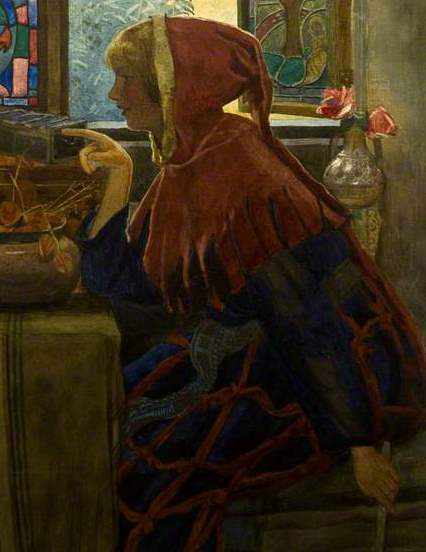 Going back to Folly, does her dress look familiar?


I always get twitchy when I see a 'netted' dress because I instantly go back to Sidonia Von Bork.  I think Moser is implying that Folly can ensnare you in her skirts (take that as you will).  Learning looks very wary as he views Folly across the table, with his books seperating them, but she is pointing at him and definitely has her sights on him.  He looks like he is almost defending himself with his book pile, the other book resting against them; he is defending himself from Folly through knowledge.  I don't think it is too much of a stretch to say that you could change the words 'Folly' for 'Pain' and 'Learning' for 'Experience'.  Applying this to Moser's own life, his experience with his wife possibly taught him not to trust again and he shuts himself away with his experience, protected from further pain. 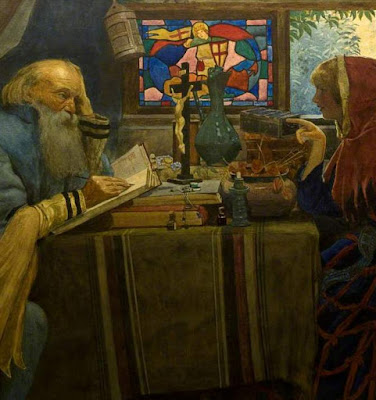 Looking at this painting I was struck by the vertical lines in the picture, in the stripes on the tablecloth, the vertical of the window frames, the stripes on his sleeves and even the crucifix, all appear barriers between the man and the woman.  Interestingly the stripes on the sleeve of the raised arm provide a complimentary line to Folly's pointing finger, but she would have to get through Jesus to get to him.  However attractive Folly is, Learning has defended himself against her very well, yet they will always be together so his studying will have to continue if he is to resist her.

Oswald Moser died on 31st March 1953 after spending much of the rest of his life living in Rye in Sussex.  He left what money he had to his daughter Denise.  Interestingly, his private life has not overshadowed his art or military careers, which is heartening as his art is so unexpected and interesting. However, I'm one for a little biography in art and confronted with such a gendered image it's difficult not to read the personal, not to mention the national, implications of such a painting.
Posted by Kirsty Stonell Walker at 13:12