Whilst looking at the account in John Guille Millais' biography of his father of John Everett Millais painting Esther yesterday, I kept reading.  I was intrigued by the following report of Anne Thackeray's reaction to Millais' painting The Romans Leaving Britain - 'I thought of you one day last week when we took a walk with Tennyson and came to some cliffs, a sweep of sand, and the sea; and I almost expected to see poor Boadicea up on the cliff, with her passionate eyes.'
She was talking about this...

This painting was a bit of a sensation when it was exhibited.  The Christian Spectator has one of my favourite contemporary reviews because it is just so gossipy: 'There, take your time over it. Is that not a glorious woman? "Too much akin to the creature whose skin she wears?" Not a bit of it. She certainly has not had the advantage of being trained at an Establishment for Young Ladies, nor would she make a model District Visitor, nor can I fancy her filled with gushing admiration for a nice young curate; but it is refreshing to get away from the be-crinolined namby-pambyism that so many of Eve's daughters have degenerated into ... and breathe the fresh air of this Dorsetshire coast as one might have seen it a thousand years before young ladyism was invented.' My goodness me Christian Spectator, you write an interesting review.  No-one was ever in any doubt who the young lady embracing her Roman beau was.  Back to my friends at the 1865 Christian Spectator - 'It is said that a daughter of Mr Scott Russell sat to the painter: do you notice that empty oyster shell in the corner? It is a trifle but suggestive.'


Hang on there, what is meant by that?  Are we suggesting that the oyster shell is suggestive of something arousing that has been discarded, used up?  Why has the reviewer conflated this point with the identity of the sitter?  Who is besmirching the good name of Mr Scott Russell's daughter and why?


John Scott Russell (1808-1882) was a graduate of Glasgow University and had worked on naval engineering and architecture in Edinburgh before moving down to a massive house in London.  Once in London, he became the secretary of the Royal Society of Arts and joint-secretary for the Great Exhibition.  He is most famous for his work with Isumbard Kingdom Brunel on The Great Eastern.  He had married rather well, to Harrietta, the daughter of Sir Daniel Osborne, the 12th baronet of Tipperary.  The couple had one son, Norman, and three rather splendid daughters.  The eldest daughter, Louise (1841-78) was nicknamed 'Lady', their second daughter, Mary Rachel (1846-1882) was nicknamed 'Chenny' and their youngest, Alice (1847-1936, well done for getting into the twentieth century) was nicknamed 'Dickie'.  I am indebted to Michael Ainger in his dual biography of Gilbert and Sullivan for details on the sisters, and I am also grateful to Arthur Sullivan for having such naughty relations with at least one of the sisters.  Naughty Sir Arthur.


Now, the problem I have is that neither Christian Spectator nor John Guille Millais go as far to tell me which of the Scott Russell girls is holding the handsome gent from the continent to her bosom.  So let's do a bit of digging.  One of the most fun bits of researching is ending up reading books I normally wouldn't have read in order to find out vital details.  This morning I was avidly reading George S Emmerson's 1977 biography of John Scott Russell,which isn't my normal fare but should be as it is splendid.  Likewise, despite performing in a goodly amount of G&S operettas (I particularly liked The Mikado) I hadn't read a biography of Arthur Sullivan (although I have watched 'Topsy Turvy' more times than is decent).  I now quite fancy reading the love letters between Sullivan and Rachel Scott Russell (ordered from Amazon this morning for Christmas reading).  Going back to naughty Sir Arthur, his rather reckless affair with Rachel as a pennyless aspiring composer, could be what the empty oyster shell is about, but this would be a rather nasty and judgmental thing for Millais to do, and also it presumes that Millais knew of the affair in the first place.


Actually, I have Sullivan to thank for the identity of the British woman on the cliff - in Arthur Darling, George S Emmerson's 1980 book about the Russell Scott-Sullivan romance, it is stated it was actually Alice who posed for the woman.  So who was Alice Scott Russell? 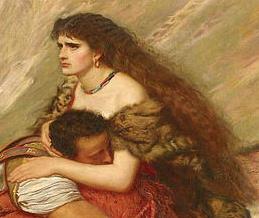 Alice was the baby of the Scott Russell family.  Born in 1847, she would have been in her late teens when she posed for the maiden on the cliffs (in Truro, rather than the often quoted Dorset or Kent in reviews).  Looking at the strong and handsome figure, it's either the skill of the artist or the young lady's astonishing beauty that brings us such a strong, serious figure of a woman.  Actually, the 1873 Athenaeum gave their own opinion on the subject thus: 'This lady who sat for the figure of the "Britoness" was, a few years ago, well known and much admired in London Society; but Mr Millais has of course exaggerated not heightened the charms of the lady, and it is hard to avoid seeing that the result is hardly a happy one.' I think the inference is that Alice had become some glorious super-savage and the reviewer had trouble with the fact that it was obviously still recognisable as Alice, but now she looked 'exaggerated'.  As it was, the reviewer was all praise for the intensity in the stare of the woman, the strength in her figure, from her brow to her feet.


In real life, Alice was not quite as dramatic as the part she played, although I still have an eye on naughty Sir Arthur (if you have seen 'Topsy Turvy' you'll understand).  Alice, as you will have seen by the dates of the sisters, was the longest lived of the girls.  At the same time as one or both of her sisters were secretly seeing Sir Arthur, she was engaged to fellow composer Frederic Clay, but that was not to last and he broke off the engagement.  She was married in 1869 at St Bartholew's church, Sydenham, to Francois Arthur Rausch. Rausch was a fellow of Trinity College, Dublin and from Rauschenberg in Switzerland.  Luckily, as we have seen from other women in Blogvent, she married before her father's money troubles (and arrest for assault) in the 1870s.  Alice and Francois had three children, Ida (1870-?), Armond (1876-1953) and Hugo (1879-1942) and it might be that the family returned to the land that bore the family name, Rauschenberg.  She died in 1936.

See you tomorrow.
Posted by Kirsty Stonell Walker at 13:39