A spot of naughty fun for today as there has been far too much early death and depression so far and we are almost half way through!  Okay, this one might involve early death but I can promise you rampant nudity to balance it out.  Let the revels begin!


Well, that escalated quickly. Today's model is a wonderful, Titian-haired beauty called Sarah Brown, or rather she wasn't.  She was actually a French lass called Marie-Florentine Roger (or Royer) born in 1869, but she took the name 'Sarah' in tribute to Sarah Bernhardt. As she was judged to look British, or 'celtic', with her long golden red hair she was given the most British surname they could think of, 'Brown' (just like the family in Paddington Bear).


While Sarah Bernhardt was a hit on the stage but also known for her diva behaviour, Miss Brown was an artist's model, easily identified in canvases of the 1880s and 1890s.  She is Clemence Isaure, a medieval figure who supposedly founded the Academy of Floral Games, leaving a legacy that would reward the best poets with gold and silver flowers.


Look how lovely and refined she looks, all elegance and dignity.  However, the stories we have of Sarah Brown are somewhat different.  She was a bit of a handful, according to the artists she worked with, although Rochegrosse denied the stories he read about her shenanigans, claiming it was all business in his studio, thank you very much.  However, the stories persist.  She apparently delighted in kicking over the easels of the artists who were working on paintings of her.  This seems a bit dubious because no matter how beautiful she was, you wouldn't want someone who wrecked your paintings, it wouldn't make sense, so I'm with Rochegrosse on that one.  Apparently she fell in love with a model called Bamboulo (who I cannot find any pictures of, unfortunately, but I'm guessing it was a pseudonym of a gentleman of African descent), whose party piece was eating a whole rabbit including bones and fluffy tail.  Well, what woman could resist that?


My favourite story about Sarah is that she was stabbed by an English countess while modelling for Rochegrosse.  No reason seems to have been given and it was strenuously denied by Rochegrosse but that is a great story to tell. Paul Dollfus, in his book Modeles d'Artistes from 1888 described her as having 'the virginal features of the Middle Ages, hair the colour of fire, and she is built like a statue.'  She was a popular model, able to bend in a popular manner to all sorts of contortions which made her a valued subject, possibly excusing her bad behaviour.  She was known to smoke while posing and keep on her stockings and boots (you wouldn't want to catch cold, after all).


I think you can tell by the pictures she appears in, such as Lady Godiva here, Miss Brown had no problem with nudity.  Possibly the best known story about Sarah, one which has immortalised her, is the story of the Bal des Quat'z Arts in 1893...

Le Bal des Quat'z Arts (of the Four Arts Ball) was first held in 1892.  The four arts mentioned were architecture, painting, sculpture and engraving and was a thoroughly artistic and serious celebration of visual arts. And boobs.

What now appears to be an explosion of cultural appropriation and racial insensitivity and boobs started as a cheeky, bohemian expression of the art world in end-of-century Paris.  Sarah's moment came in the 1893 event when she appeared as Cleopatra, apparently dressed like this...


For heavens sake.  Actually, according to contemporary accounts, she was wearing a loin cloth and was held aloft on a shield as part of a tableau vivant (what arty people claim their are doing when they have their boobs out in public) and she got arrested. Quelle surprise massive...


Sarah was arrested along with fellow models/attention seekers 'Manon' (Josephine Lavolle), 'Suzanne' (Emma Denne), and 'Yvonne' (Clarrise Roger).  Rather than appearing in the altogether in court, Sarah managed to baffle the authorities by appearing in court modestly dressed with a bonnet, looking rather 'common-place' as reported in the press. Fooling no-one, the girls were jailed for three months for indecency.  Their trial was greeted by 2000 students marching, wearing symbolic fig-leaves on their hats.  The protests started peacefully but ended with days of rioting and violence, as is traditional.  For Sarah, this was her high point in artistic and political fame as she slipped away from view shortly afterwards.  She fell victim to consumption and died at the rock-and-roll age of 27, possibly taking her own life.  The newspapers reported her death, relishing the chance to talk about her naughtiness again - 'Models are generally well-behaved girls and many live like anchorites (religious recluses) for fear of spoiling their plastic beauty, and losing the power to exact high fees. But Sarah Brown, who was a red-haired Jewess, lived the life of a Bacchante.' 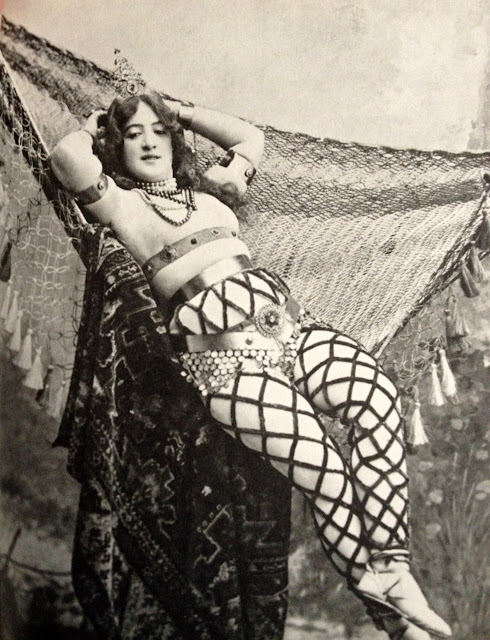 Despite the briefness of her life, Sarah Brown, the nude-y saucepot, certainly won't be forgotten.

See you tomorrow.
Posted by Kirsty Stonell Walker at 12:48