If you have been following this blog for more than a year, you will know I have problems with the bit between Christmas and New Year.  I slump into a malaise, a fit of ennui that lasts until I can start planting seeds in February.  It is dark, it is cold and it is pointless and filled with resolutions that I inevitably break and are painful in the meantime.  Ugh.  No wonder we need a New Year bash to cheer us up or else we'd just be circling the drain until Spring. Wowser. 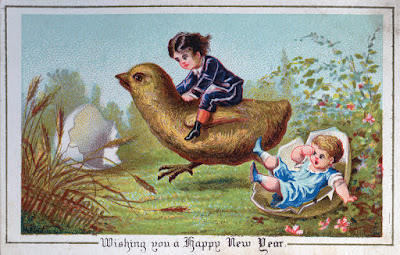 We always complain that greeting card manufacturers seem to come up with new excuses for us to buy cards for each other but some of the past reasons seem to have fallen out of favour.  Is there any among us who still sends New Year Cards? While I am still struggling to get thank you cards written, I would not be overjoyed at yet another set of cards to write at this time of year.  However, some of these Victorian examples might be enough to convince me otherwise... 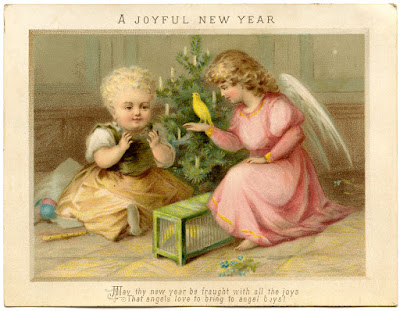 Nothing says New Year like an angel bringing your fat baby a canary.  Bearing in mind that the tree behind them is covered in candles, I think that scenario will end in trouble and the unmistakable smell of burnt feathers. 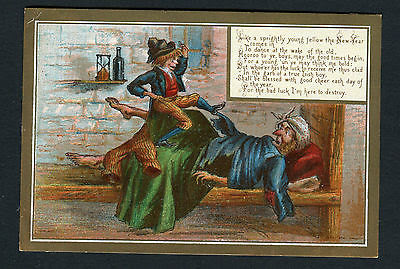 Well, this jolly scene is the new year dancing on the old.  Well, how smashing and sweet, and filled with good fortune and optimism or something.  In no way does it resemble this:

And while we're at it this - 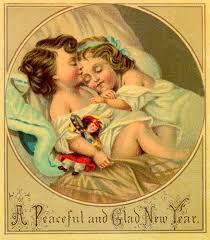 doesn't put me in mind of this at all...

Righty-o then, moving on. 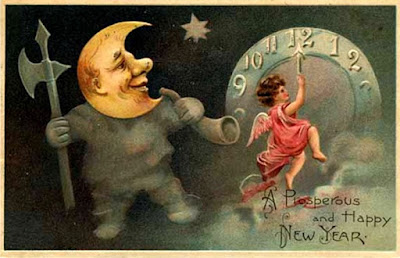 The moon is a regular inclusion on New Year cards, probably because the actual New Year business happens in the middle of the night and so you get to celebrate in the moonlight with a halberd and horn.  A few years ago our neighbours had a fancy dress New Years party which ended in a fist-fight between Elvis and a caveman over Marilyn Monroe. That's what I call a party... 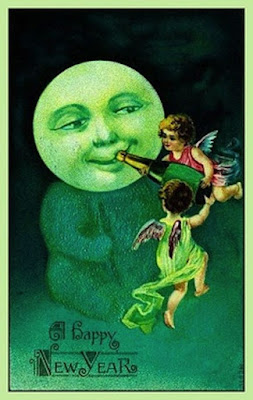 In quite a few, the moon-man is being plied with alcohol by little angel-fairy things.  Alcohol does seem to play a reasonable size in proceedings, hence fist-fights I suppose.  As the nights draw in, alcohol does tend to come into its own, possibly to alleviate the gloom, cold and general pointlessness of existence.  Cider for Mrs Walker! 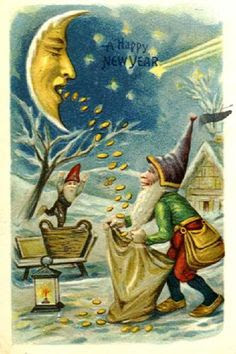 Of course, with drinking comes vomiting, if done to excess.  How splendid it would be if coins came out!  Okay, well maybe not splendid but rather handy at this time of year when I don't know about you, but I'm rather broke after Christmas. Maybe I should hang around outside with a sack tonight in case the moon starts projectile vomiting cash.  There's a pretty thought. 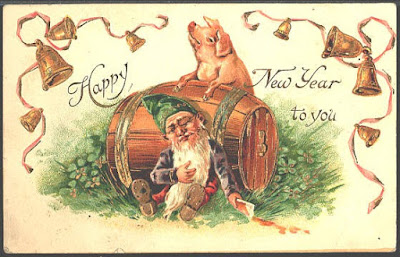 I blame the gnomes.  There is a 'drunken gnome' motif to many of the cards, seen here above being discovered by a self-righteous pig. If they are not encouraging the moon to drink so much it vomits, then they are getting smashed themselves.  Gnomes, you have a problem, go home. 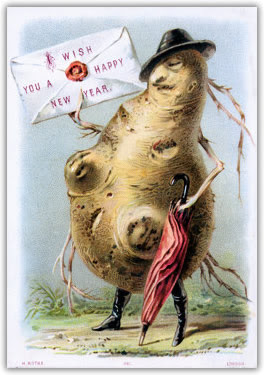 No, not a clue. This is what happens when you drink - a card with a potato in leather boots seems perfectly acceptable. This is how friendships end. The Chitted Potato of New Year may arrive at your house tonight.  Don't say I didn't warn you. 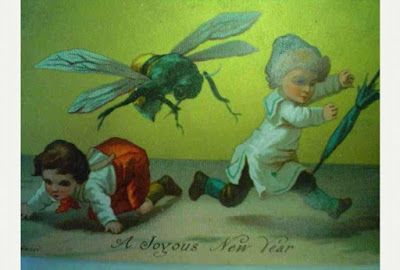 It's not only weird vegetables we have to worry about tonight, but also giant insects.  This New Year lark is a nightmare.  Won't someone please think of the children? 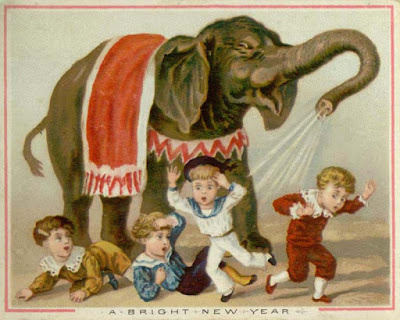 The best thing that can happen to children in 2017 is to be sprayed by a vengeful circus elephant. I'm not sure that's a narrative I wish to endorse, however if that bunch of velvet-clad Little Lord Fauntleroys were near me, I might be tempted to unleash the nose-cannon too. Especially the one in the sailor suit.  Really, Social Services should be involved in some instances. 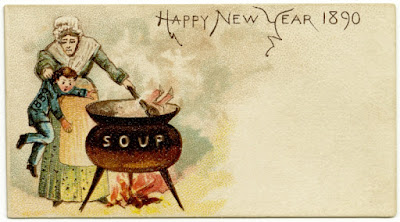 Case in point is a card that says 'I hope 1890 brings you child-flavoured soup'.  I see that the child represents 1889 and so is going into the soup because it's delicious, or something. I thought the old year was an old man and the new year is the child? 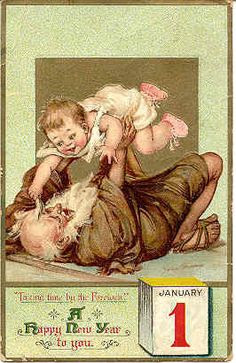 Yes, like this, although poor Old Year looks like he is being assaulted by the cute New Year.  Actually, he's Father Time and he is being 'taken by the forelock', whatever that means.  It sounds like that motivational speech, where you are meant to take things 'by the horns', that sort of thing.  Go out and seize old men by their hair, it's what the Victorians want you to do. 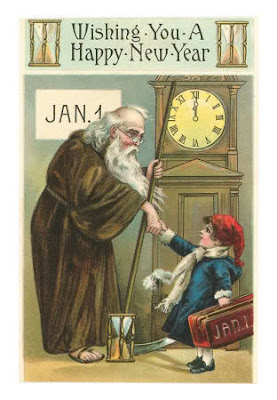 Actually, don't do that, just shake them by the hand, that's more respectful and less likely to end in a lawsuit or arrest. I have a questions about allowing children that young to be socialising at that time of night, even metaphorical ones.  That can't end well. 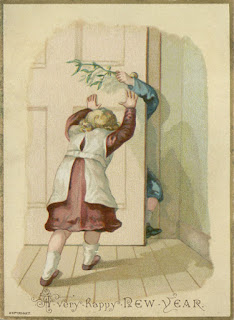 See?  All that carousing and staying up to all hours, ends up with this sort of malarky.  This rather dubious card shows a young girl fighting off an over eager suitor.  For heavens sake. I know you could get married at 12 years old in Victorian times but it wasn't recommended.  'If you want to kiss something, kiss the door!' exclaimed little Emily as she slammed it in his face. 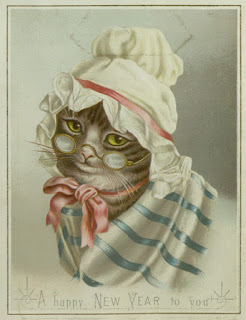 Wise Grandma Cat  says 'Happy New Year'.  Or rather, she says  'Meow, meow, I'm going to get you back for dressing me up like this. And you'll only find out when you put your shoe on.' 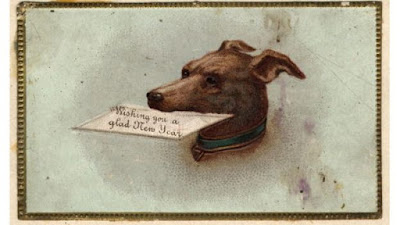 Disembodied Dog Head also wishes you a happy new year, although I'm not sure why we can't have the rest of the dog too.  Probably because it wouldn't be disturbing to have a normal dog. Maybe we are missing a trick not having New Year Cards as they are the perfect opportunity to be as surreal and weird and freaky.  I mean, look at this horror... 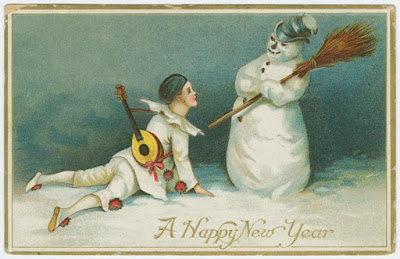 Why is the lute-playing pierrot doing yoga in the snow?  Why is the snowman watching him? With a broom?  How does any of this pertain to New Year? 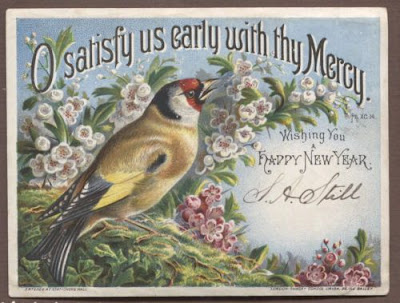 This one is almost normal.  A goldfinch herald in the New Year with the promise of blossom and all good things, but then the words read 'O satisfy us early with thy Mercy'.  Wait, what? What do we need mercy for and why does it need to be rushed in at dawn? What exactly are we all getting up to tonight?  Heavens to Betsy, I've had some rare old times but never have I had to ask for God's forgiveness at the end of it all.  Blimey. 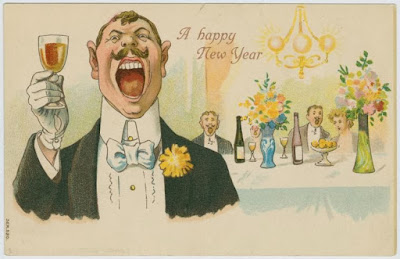 So I'll end with possibly my 'favourite'.  Here is a little known fact about me that possibly I shouldn't be sharing - since I was a child my nightmares have regularly featured people screaming but no sound comes out.  Now, I'm sure that is psychologically significant but if I got to pick a New Year card that freaked me out the most, I would pick this one where everyone at the party has started screaming together while making a toast. I am left to wonder what they have seen that causes they all to scream - is it the zombie apocalypse?  Have they all noticed the little girl standing with her back to them in the corner, holding the dripping knife? Lovely.  Have a good one. 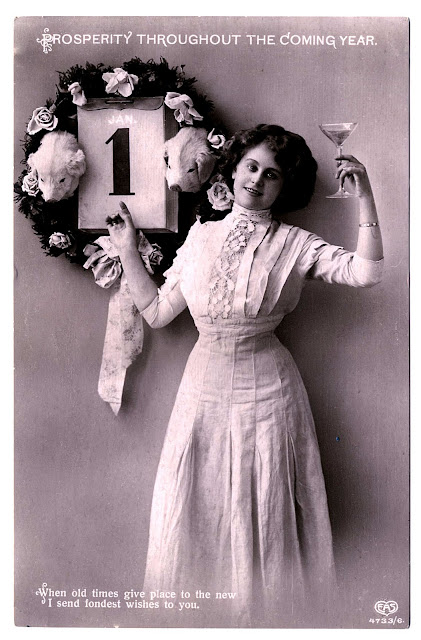 Okay, look whatever you are up to, have a lovely, safe time and I think I might have found the perfect card for you all.  I wish you all prosperity through the coming year, with very little vomiting, no matter how much the gnomes make you drink.

And I truly do send my fondest wishes to you.
See you next year...
Posted by Kirsty Stonell Walker at 17:38