Blimey, we really are on the home straight now, aren't we?  This is my penultimate Friday before Christmas, which seems an odd thing to point out, but there you go. Today I have angels and a sneaky book review...


If you have ever had the pleasure of visiting the Watts Memorial Chapel in Compton, near Guildford in Surrey, you will know it is heaven on earth.  One of the most beautiful places in Britain (in my humble opinion), it is a small and perfectly formed chapel in the heart of a steep sloping graveyard.


Anyway, not only are there angels inside the building, but they are also all over the graveyard on the graves...

And all over the outside of the building too...


This was the vision of the artist Mary Seton Watts, who created the entire site with her band of local craftspeople.  The whole display defies pigeonholing into one particular style, being sort of art nouveau-ish, Arts and Crafts-y, Celtic Revival-esque and delivered in a vivid terracotta and jewel-coloured paint.  If you have never been to Compton, I urge you to go because it is unlike anywhere else.  If you are visiting London from abroad, it's not that far down to Guildford and then onwards.  It is unique and wonderful.  All this brings me to another reason for featuring Compton's angels... 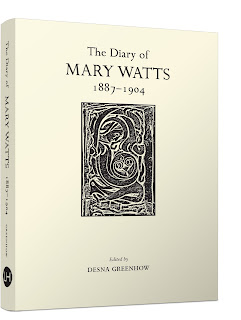 At first glance this is a very unpreposessing-looking book.  The cream cover is decorated with a small woodcut, but otherwise it looks fairly plain.  Inside, however, it is one of the most fascinating and illuminating books I have read for a long time.  These are the diaries of Mary Seton Watts between 1887, just after she had married George Frederick Watts, to 1904, Watts' death and Mary's withdrawl from her diaries.  She called them  'Fatima', each little fat book where she wrote her days out in tiny writing, and through these diaries we get to know Mary and her life with Watts.  What is immediately obvious is that she idolises him.  What becomes apparent is that he is very lucky to have met such a gem of a woman...


It's not that Mary doesn't record exactly what sort of man she married.  I have a lot of time for G F Watts and his art, but the more I know about him the more of an enabled child I feel him to be. This Mary knows and reflects in her reports of him.  She quotes her Aunt Mela - 'He has kept his soul like a little child's.  Who can fail to love him as one does a darling child, & reverence him as a great intellectual being with a life's experience behind him.' (June 17, 1887).


This is in no way just a domestic diary of a doting wife.  I enjoyed reading the accounts of her work and how well they contrast with her accounts of her husband.  She is fierce vitality, he is more fragile: 'Worked like a tiger at my ceiling all moring, the glass door wide open & the sun streaming in ... He is still feeling tired & low, the effect of the beef diet only.' (February 10, 1891)


I was immediately scurrying around the index finding mentions of all the people in Mary's life.  I was interested in people like May Prinsep (who naturally is very present in the lives of the Watts), but also people like Lord Leighton, Burne-Jones, Holman Hunt and Oscar Wilde are part of the couple's wide social circle.


I can't think of anyone who wouldn't find Mary's diary fascinating.  She touches on London high art circles, the Pre-Raphaelites, the Freshwater crowd and all points in between.  If you love Victorian art and literature, you have a friend in Mary Watts as she and her Fatimas recorded in tiny detail life at the centre of the cultural scene in the latter part of the Victorian age.


One of the unexpected delights of the book are the photographs, some of which you might know but some I had never seen before. They also are helpful illustrations to the depth and skill of Mary's work which often gets overshadowed by her husband's reputation.


Each year in the diary is prefaced by a summary of the events, which is helpful, and Desna Greenhow, the editor of the volume, has done a wonderful job of adding footnotes and an introduction which places Mary in context before we meet her though her own words.

I think you deserve to buy yourself a Christmas present as I'm sure you have all been very good.  This is the sort of gift that keeps giving and you too can spend time getting to know Mary Seton Watts and her world.  It will be time extremely well and pleasurably spent.

To buy The Diary of Mary Watts 1887-1904 visit here (Amazon UK) or from a bookshop near you, or of course from the Watts Gallery!  It will be released in America in May 2017 and can be pre-ordered here.
Posted by Kirsty Stonell Walker at 13:59