The 'Sixties in Shalott

Here we are again, talking about Tennyson and illustration as an excuse for my collection of illustrated Tennysons.  Anyway, enough about my problems, this week I have another smasher to show you and one I hadn't seen before.  I bring you 'The Lady of Shalott' (1966), illustrated by Bernadette Watts... 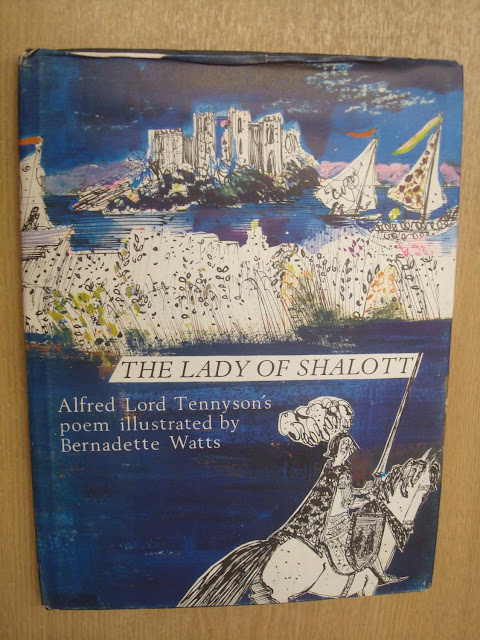 I was immediately struck by the style of the illustration and wanted to see more, so £4 later (via Abebooks) I owned a copy.  And it is indeed a thing of beauty... 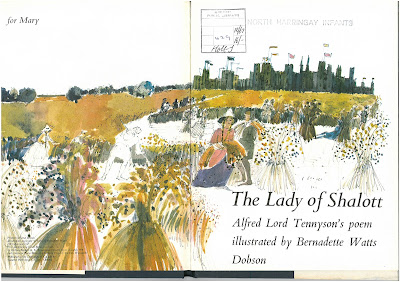 Hurrah for an exlibris copy! So, in the 1960s, Dobson Books published a richly illustrated edition of the poem 'for the child of the 1960's' (as the flyleaf states). As the introductory text says 'Its mystery and magic is still being discovered and loved around the world more than a century later. Its "message" is simple - death in the real world is preferable to life lived at second hand.' 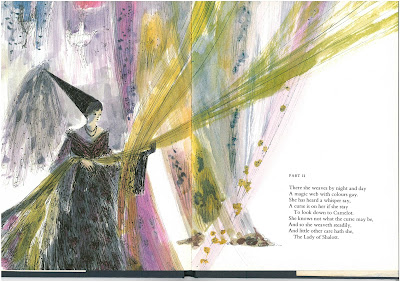 The Lady is pictured as a slight, sad figure, beautifully dressed as she pulls on swathes of colour, as if weaving a rainbow. She is melacholic and drooping, while about her outside figures skip, dart, run amongst geese and live lives that are anything but static. 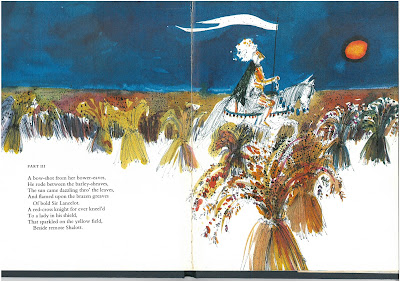 The deep blue of the sky is the perfect foil for the golden 'brazen' Sir Lancelot, as bright as the sun, striding through a sea of corn.  If you had to die for one look, what a look it is! 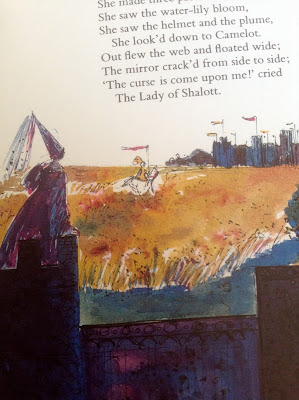 In complete contrast to the majority of illustrated copies of this poem, there is no depiction of the mirror and the moment it cracks.  Instead, the illustration shows us the solitary figure, precariously high in the tower staring for the first time out across the swathe of countryside she had never seen firsthand.  Not only Lancelot, but also the cornfields, the peasants, the river and the flickering flags of Camelot. 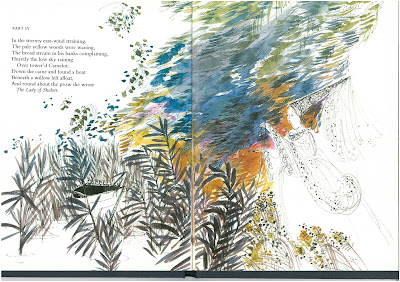 The lady, already pale like a ghost, flutters into the deep colours of the outside world to find her boat, on her first and final journey beyond the walls of her tower.  Her lack of colour seems to interrupt the washes of blue and orange that cover the page.  Her final journey has her sitting in the boat, not lying, beautiful and dignified and with a hint of a smile as she finds her final resting place.


The back flyleaf gives details of Bernadette Watts, the illustrator, newly graduated from Maidstone College of Art where she studied under Brian Wildsmith.  As the bio says - 'Now 24, Bernadette Watts has few ambitions, other than to be a successful illustrator of children's books...'

Well, fifty years later, I caught up with Bernadette who is indeed a successful illustrator of children's books, to ask her a few questions...


Q. Did you know much about Tennyson before you illustrated The Lady of Shalott?

I knew nothing about Tennyson, although since my schooldays I did love poetry, such as Walter de la Mare, WH Davies, Keats, Coleridge etc. My Mother was a recluse and spent hours reading. She often recited 'The Lady of Shalott' to me and so I too learned it.

Q. How did you get the job?

I didn't "get the job", I just illustrated it because I wanted to and Dobson Books took it. I have never "got a job", only done my own thing.

Q. I see a link between your art and the work of David Gentleman, a favourite of my husband, and totally unlike the other Art Nouveau-esque 1960s Tennyson illustrations I have.  What artists influenced you?

I don’t know David Gentleman's work, but have heard of him. If you read my Website you will see that my teachers at Art College included Brian Wildsmith and David Hockney.

Q. Is The Lady of Shalott your favourite Tennyson poem? Is there another one you would like to illustrate (or have)?

No, I haven't illustrated any other Tennyson poem. I did design and illustrate a collection of poems by


James Reeves ONES NONE. You can find that on Amazon. It won a design prize. 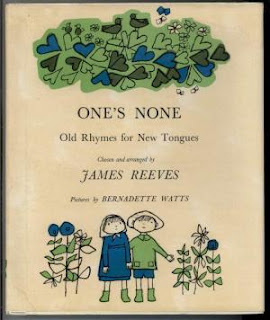 My very sincere thanks to Bernadette for her patience and help and for creating such gorgeous illustrations for one of my favourite poems.  Editions of her illustrated poetry books and children's books can be readily found at Abebooks, Amazon or any bookseller.
Posted by Kirsty Stonell Walker at 14:16