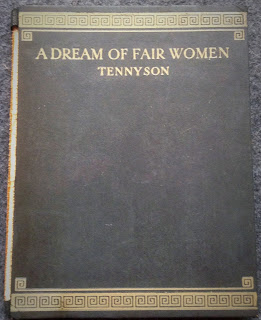 It's a little bit battered, it doesn't have the spine bit anymore, but inside it's perfect and it only cost me £6.  What intrigued me most was that it was an illustrated copy from 1928.  A Jazz Age Tenyson?  What on earth must that look like... 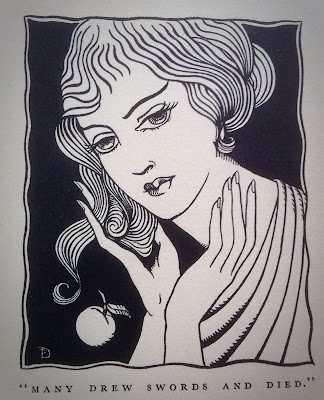 A Dream of Fair Women is one of a series of poetry books put out in the late 1920s by The Bodley Head publishing.  Its two founders, John Lane and Elkin Matthews, had been selling books under the title since the late nineteenth century, including The Yellow Book.  Both of the founders died in the early 1920s, but the nephew of John Lane continued in control of the company until it ran into financial difficulties in the 1930s and became part of other publishing houses.  Anyway, in the middle of this period The Bodley Head offered a series of poetry titles under the banner of the 'Helicon Series', all of which were illustrated by cutting edge illustrators of the day. Constance Ethel Rowlands' The House of Life by Dante Gabriel Rossetti is definitely going on my wish list... 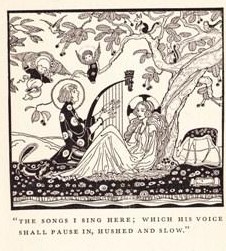 Anyway, back to Tennyson.  The Bodley Head Helicon Series includes a copy of The Day Dream by Tennyson, with illustrations by Elizabeth Rivers from 1928, but also from the same year came A Dream of Fair Women, this time illustrated by Agnes Pinder Davis.

It's a small book, both in size and in length, at only 46 pages. The illustrations consist of 4 full-pages and four small pictures at the end of the sections, such as the above which symbolises how men fight over and for women, represented by the apple. 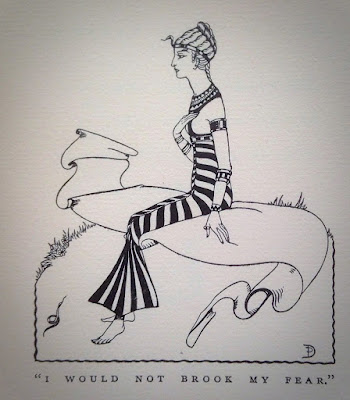 The narrator tells us of a dream he has in which he is walking in a beautiful forest. The dream comes after he has read Chaucer's The Legend of Good Women and features women of history who are renown for their beauty.  He starts with a meeting with Cleopatra.  In Davis' illustration, she is a smoke-eyed movie goddess in the style of Theda Bara in Cleopatra (1917).  She is more than aware of how much power her beauty affords her and is frustrated that she could never seduce Caesar.  In Davis' drawing, she sits on a swirl of fabric, sphinx-like and unknowable.  The narrator finds her alluring but disconcerting, especially when she gets her boob out with the asp bite on it.


It's not just femme fatales that feature in A Dream of Fair Women.  The narrator's second encounter is with Jephthah's Daughter, a dutiful and honourable woman. Her father made an oath to God that should he return victorious he would sacrifice the first thing that greeted him on his return.  That sort of thing never goes well.  Anyway, predictably, it was his first and only child.  When Jephthah tried to find a loophole in the promise, his daughter would not have it and said he had to keep his promise.  For Goodness sake... 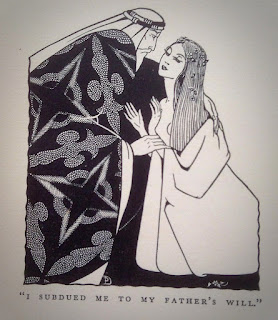 I find this illustration to be the one that reminds me most of both Eric Gill and Aubrey Beardsley.  The patterning on the cloak especially has a Belle Epoque feel to it, but the stylised face of Jephthah echos the Afro-Modernism of Gill, although less mask-like.  You can see both the Egyptian influence, so prevalent in the 1920s and the influence of dark-eyed movie stars in her work.  Look at Fair Rosamund, and check out those eyelashes... 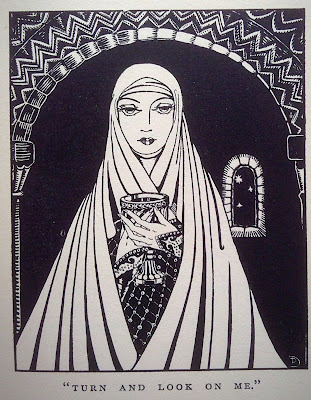 In Fair Rosamund's section she sums up the peril of being born beautiful:


'Would I had been some maiden coarse and poor!
O me, that I should ever see the light!
Those dragon eyes of anger'd Eleanor
Do hunt me, day and night.'

She poses in an 'Damsel of the Sanct Grael' manner but her cup holds poison that will end her life.  I love that Cleopatra replies that she should have stabbed Queen Eleanor while she had the chance.  It is interesting that the women complain that their beauty results in death, but the narrator falls in love with each of them, as if proving their point that they are not valued for themselves, but for their beauty.  It is almost as if a man may fight and earn his power but a woman is indiscriminately born with power that they cannot control fully.  Cleopatra seems the only one who played the game with the men and all she ends up with is a bite-mark and an afterlife devoid of men. 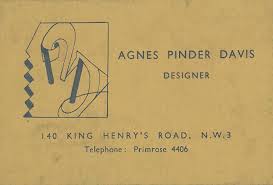 Now for a bit of biography: Lilian Agnes Lambert was born in Kingston upon Thames in 1895, daughter of a barrister who became a member of parliament.  In the 1901 census, the family was doing very nicely, thank you very much, and were living in Holland Park.  In 1923 she married Eric Bernard Pinder Davis, engineer for Shell-Mex and origami wizard, and the couple lived in Camden.  She seems to have been a bit of an all-rounder when it came to art and design.  She designed interiors for ocean liners such as Mauretania, where she designed a panel for the Tourist Class Smoking Room, as well as one for the children's playrooms.


She also designed a carpet for the Queen Mary, launched in 1936, as well painting pictures for the dining room, using silver foil as well as paint in a floral design.  According to the Western Morning News and Daily Gazette, Davis invented the 'metal picture', 'using thin sheets of metal foil against a background of oil paint.'  As well as her book design, both inside and covers, she is probably best known for her work with Royal Doulton, Royal Worcester and Crown Staffordshire, designing tea services, dinner services and figures. 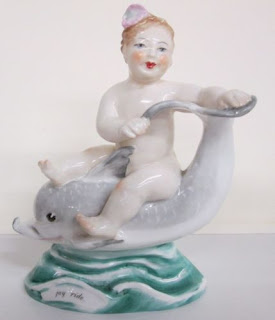 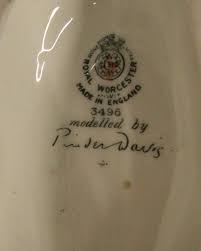 The above figure comes from the 1950s and is one of a series of cherubic oriental children riding sea creatures.  This one is called 'Joy Ride' and is available on Ebay should you fancy it.  She seems to have kept designing as long as people bought her work and finally died in 1973 on the sunny south coast at Worthing.  I especially like her work on Tennyson as she brings a modernity to a poem that was almost a century old at the time of her illustration, drawing on the fashion for Deco-fabulous glamour queens of the cinema.  The frustration of womanhood has a certain resonance after the First World War, with women inhabiting a world where a generation of men had gone to fight for them and been squandered while they could do nothing to prevent it.  Despite progress to the vote and the freedoms of the 1920s, there were some uncomfortable similarities between the bobbed-hair girl about town and the Victorian maiden, hence the popularity of Christina Rossetti's verse around the centenary of her birth. 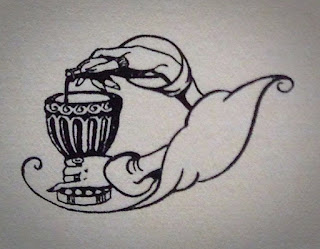 By reimagining a text from a previous century, Agnes Pinder Davis helped to show us that our ancestors were not so different, not so strange in their ways and we share far more with them than we care to acknowledge.  Plus I get another illustrated Tennyson for my shelf, so everyone's happy...
Posted by Kirsty Stonell Walker at 18:36