Review: Red: A Natural History of the Redhead 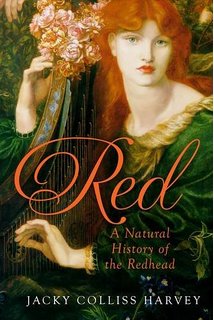 The 'natural history' of red hair is the subject of a brand spanking new book by Jacky Colliss Harvey, which I was sent as a jolly review pressie.  The front, as you can see is emblazoned with La Ghirlandata, reflecting the thread of the book that explores the cultural significance of red hair, but that is not all.  Starting 50,000 years ago, Harvey traces the origins and spread of russet tresses across the globe with the origins of man and the migration of the first tribes from Africa.  The recessive gene and its behaviour is the subject for the first fascinating chapters, showing how the characteristic can appear full strength, or in part, or in freckles, and predominantly in northern Europe.  Early on Harvey mentions albinism (which again I have an interest in) and there are links in the physical development and issues due to photosensitivity which I found very relevant to the Walker Household (which numbers one albino, one redhead and one chestnut glaze).  It's not only that which Harvey touches on; she also mentions things believed about redheads in history, from witchcraft, mind-reading and all manner of other magical powers.  I have informed Mr Walker that with his magical powers and Lily's mind-reading, we should go on the road...

The cultural side of the book runs from Jesus to Joan Holloway covering all points in between.  The allure of a red-headed woman (and the conversant repel of a red-headed man) seems heavily linked with sin, temptation and temper.  One splendid quote runs 'God gives a woman red hair for the same reason he gives a wasp stripes.' Lovely.

The description of 'red' hair comes from Elizabethan time, according to Harvey, when the term 'redde-headed' was coined in Thomas Cooper's Thesaurus Linguae Romanae et Britannicae.  The bright tresses of the queen gave way to a fashion for the colour, but stories of her temper and caprice were wide-spread and enduring.  Her independence, stubbornly holding out against attacks from abroad and at home, not to mention her unmarried status all added to the Virgin Queen's reputation and her red hair was just a part of that character.

﻿
The Biblical redheads, Judas and Mary Magdalene, find their full expression in art, as covered in the chapters on red hair in art.  This is obviously where we all come in, as the Pre-Raphaelites get a thorough going over as well as Whistler and Courbet.  Rather than concentrating on that well known ginger, Elizabeth Siddal, Harvey follows the life and career of Alexa Wilding...


Harvey states Alexa's hair was somewhere between copper and marigold, which is an interesting claim.  On the whole I feel that Rossetti had a mono-mania about hair colour and everyone got rouged up, even poor brunette Jane on occasions. Anyway, along with Alexa, Harvey looks at Jo Hiffernan...


Jo, the beautiful Irish girl, was mistress to Whistler, and then model and mistress to Gustav Courbet, notoriously sitting (or should that be reclining) for L'Origine du Monde...

Anyway, there is a very interesting discussion of the lady-garden in The Origins of the World, which is very determinedly not red, and is very, very dark.  If Jo was a natural redhead that is not her lower levels, and in fact the woman's head portrait that was recently matched to The Origins seems to bear this out.  Sorry Miss Hiffernan, that's not your bits and pieces.

In Gustav Klimt's Beethoven Frieze he characterizes the blonde woman as Debauchery, the brunette as Intemperance and the redhead as Lust.  This connection of red hair with sex is arguably what linked Jo Hiffernan with such an explicit image, and lingers still in figures such as Jessica Rabbit, referencing back to the ever-russet-y Mary Magdalene.  By contrast Harvey brings us up to date with heroines full of grit and determination, such as The X-Files' Agent Scully and Disney's Merida from Brave.  The duality of the redhead, both horribly fallen and steadfastly upright will rage on, no doubt.

To conclude, if you want a book about the meaning of red hair in Pre-Raphaelite art, then this probably isn't the book for you as that is only one part of what is on offer here.  However if you are after a full and fascinating account of the origins and cultural meanings of being a bit of a ginger, then you will be both impressed and entertained.  The subject spans ethnography, geography and science, all the way to art and pop cultural and is always understandable and thoughtful.

To buy Red: A Natural History of the Redhead visit Amazon UK (here) or US (here) or visit your local bookshop...
Posted by Kirsty Stonell Walker at 17:16