Now, you know me, I'm somewhat west country in my origins, born in Wiltshire and able to milk a cow.  All this gives me obvious reason to love the works of Thomas Hardy.  About 10 years ago I gave a paper at a conference all about Hardy novels and movies.  Did you know Thomas Hardy got to visit the film set of an adaptation of Tess of the D'Urbervilles?  Incredible to think of it really.  Add to this the 1967 film of Far from the Madding Crowd was filmed in my home town of Devizes, then Hardy and me were always going to get on well cinematically.  So imagine my delight to find there was a new version of Far from the Madding Crowd at the cinema this spring... 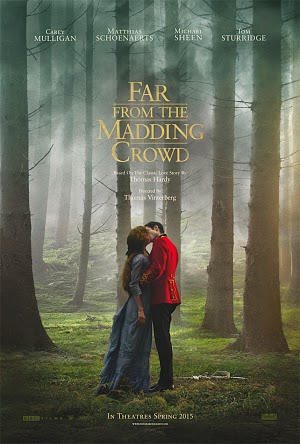 You probably already know the story, but it concerns Bathsheba Everdene (Carey Mulligan), a young woman who inherits a farming estate from her uncle, and the three men who attempt to win her love.  In the 'honest and rather gorgeous' corner we have Gabriel Oak (Matthias Shoenaerts), as saintly and solid as you can imagine from the name...

In the 'independently wealthy if a bit intense' corner is William Boldwood (Michael Sheen), not a man to be trifled with...

And finally in the 'hot as York in August' corner we have Frank Troy (Tom Sturridge)...

Bathsheba can have one of them, all of them or none of them, but what are the consequences of her actions?

To start with, Bathsheba is a difficult character to like.  One of the reasons I appreciated the Hunger Games books is that Katniss Everdene (named for the Hardy heroine) shares the same awkward unlikableness, but both have a quality to make you not only stick with her but also identify.  She's a woman who has been given unbelievable choices in a time when she can't have expected anything like that and she's too young (and female) to have experience that will make her ability to choose possible.  I'm not sure I was completely won over by Carey Mulligan's portrayal but she does have ample apple-cheeked charm and looked determined as she dipped sheep, drove a wagon and sold grain.


As for her three suitors, I felt that Michael Sheen stole every scene he was in and I would have married him without question.  That's just me and I may have been hepped up on giant chocolate buttons when I thought that.  Boldwood is meant to be the least appealing physically and he was the beardy one stuck between two gorgeous young chaps.  However his slow derailment at the fickle hands of Miss Everdene was just heartbreaking.  When he stands up and sings with her despite being so cripplingly socially awkward, you can't help but feel for him. The final discovery in his house at the end made us weep when it could have so easily come off as creepy and weird.  Just as Tom Hollander made you feel guilty for finding Mr Collins in Pride and Prejudice vaguely appealing, Michael Sheen makes Boldwood blameless and wonderful, despite it all.
Frank Troy however is a gitweasel.  We all knew this going in and Tom Sturridge (Millais in the recent Effie Gray biopic) does a good job of looking both gorgeous in a uniform and being a feckless ratbag.  He reveals Bathsheba's weakness, her inexperience and is an unflattering mirror of her.  He is vain, young and in need of flattery.  Our introduction to him as he waits and waits and waits at the church tells you all you need to know about him. He is a man of wonderful surface and very little else.  Even his great gesture of love towards the end of the film does not have much substance behind it.  If I had a complaint about Troy, it would be that Sturridge is a remarkably slight man, really no bigger than tiny Carey Mulligan and so he looked vaguely ridiculous next to Gabriel Oak, but maybe that was the point. I'm just saying I'd probably require a somewhat bigger man to sweep me off my feet (quite literally), which leads me to bachelor number three...
Last seen in A Little Chaos, Matthias Schoenaerts does a lovely, if stoic, job as Gabriel.  Enormous, dependable and fond of his dog, he is the perfect man for Bathsheba, but she has to take two hours to realise it. I was sorry they missed out the part early in the book where Bathsheba saves Gabriel's life because it gives more of an idea about how equal they are in terms of strength and ability to do right by people.  I'm guessing it would be a bit of a stretch to imagine tiny Carey being able to shift the poor chap.  Gabriel has what feels like only a handful of words to say in the film, but his goodness influences both Bathsheba and Boldwood, but not Troy which immediately tells you who is the bad apple. I was sorry he did not have a west country accent as it is something I love about a Hardy film, and I did feel a little unconvinced by the passion between Bathsheba and him when they finally did admit their love.  However, he did love his dog. I was completely convinced by that.
As with all 'Wessex' films, the countryside is very important.  I was sorry there was not any recognisable landmarks, such as Maiden Castle, in this one, but the use of colour was gorgeous.  All was green, grey, blue and brown, making Troy's red coat stick out so badly as to alert you to his danger.  The film poster uses the moment in the forest when he is there at odds to all that surrounds him and yet irresistible. All the costume was beautiful but that bloody red jacket put you on edge every time you saw it.
The supporting cast were familiar and marvellous.  Juno Temple made an ethereal Fanny Robbin, not as silly as previous interpretations of the part, and given less screen time than she deserved. Her fate and its effect on the characters was somewhat lessened by the brevity of her introduction but still she had an Ophelia-esque quality to her wedding gown that was nicely foreboding.
My absolute favourite character has to be Liddy, cheeky wing-woman of Bathsheba, queen of the withering look and splendid bonnet.  Jessica Barden will be instantly recognisable to Hardy film fans as the appalling Jody in Tamara Drewe, a modern-day version of the same story (and possibly my favourite Hardy adaptation).  Hardy story's rely on the subtle humour injected in the narrative by side characters and Liddy wonderfully fulfilled that role.  You need the humour in order to provide depth to the tragedy and although Far from the Madding Crowd is not as heart-stomping as Jude the Obscure, moments like the fate of Young George (*sob*) and Fanny Robbin (*sob sob*) need a bit of lightness to prepare you for the ending.
This version of the story might not have anything new and revolutionary going for it but it is gorgeous to look at and skilfully handled. A stand-out performance by Michael Sheen makes this a must-see and anyone who fancies a wallow in gorgeous scenery will love the green and pleasant land on show here.  Take chocolates and a hanky and get comfy, you won't be disappointed.
Posted by Kirsty Stonell Walker at 14:57