Good Morning May, May You Never Be June

So yesterday we got as far as May Prinsep's marriage to Andrew Hichens in 1874 and the Cameron's move back to Sri Lanka (Ceylon) in 1875.  Andrew wrote to May's brother Harry that he considered the Cameron's move to be 'total madness', but then the family finances were stretched to breaking and they had to make a move.  It is certain that they were greatly missed and sadly never to return, Julia dying in 1879 and her husband in 1880.

Andrew Hichens continued to work in Hichens, Harrison & Co (est. 1803)  in Austinfriars, London's oldest independent brokerage and investment firm.  The couple's London home was 27 Chester Street, Knightsbridge and despite the demolition of Little Holland House in 1871, it seems likely that the new centre for the old Prinsep circle was New Little Holland House on Melbury Road, where Watts had a new house and studio built in 1876.  The land abutted that of Frederic, Lord Leighton's house and it might have been there that May met Leighton, sitting for this portrait in 1885...


The Hichens not only kept a house in London but also Monkshatch in Compton, near Guildford, Surrey.

Mary Seton Watts described the house as standing high yet sheltered by a chalk cliff from the north and east winds.  The chalk behind reflected back sunlight into the home and made it an idyllic place to live.  May and Andrew used the house at weekends and holidays, spending most of their time in London, so when G F Watts' health failed, the coupled offered him the use of the house in which to recuperate.  Andrew had become as attached to Watts as his wife, writing in a very emotional letter to the artist that 'you need not be told how entirely dear you are to us, and how very nearly all that concerns you touches us.'  When Watts married for the second time, to Mary Seton in 1886, their first stop after the ceremony was to lunch with May and Andrew in Chester Street.

It is undoubted how deeply May and Andrew cared for Watts, 'the beloved little man' as they referred to him.  When the Watts moved into Monkshatch, they turned the living room into a space Watts could paint in, Andrew remarking 'I told you I built that studio for you'.  The Library was theirs to be alone in, but if they wanted company they could roll back the dividing panel and watch Andrew and May at dinner.  Watts remarked to his wife on one such evening 'I wonder if any other roof in England covers four happier people.' When Mr and Mrs Watts finally moved out, they went only a short distance, building a house in the village, called Limnerslease.

The parental figures in her life slowly vanished as Henry Thoby Prinsep died in 1878, followed by Aunt Sara in 1887.  Watts died in 1904 and two years later Andrew died at Monkshatch on 27th August 1906.  He was cremated and his ashes interred at the beautiful cemetery that surrounds the Watts Chapel.

Two years later May's brother paid a visit from Australia and it was the first time he had seen May since 1866.  Harry Prinsep (1844-1922) had visited his father's estate in Australia (also called Belvedere after the estate in Bengal) whilst on his 'grand Tour' after schooling and fell in love with the land and a woman.  Even on the other side of the world he had run into old friends.  Having met the Tennyson family while staying with family in England, he became firm friends once more with Hallam Tennyson, son of the Poet Laureate, while Hallam was serving as Governor of South Australia (1899-1903), then Governor General of Australia (1903-4).

In 1918, younger brother Jim Prinsep wrote to Harry : 'It's a profound secret...you'll be able to swagger a bit by referring casually to 'my brother-in-law, who was formerly Governor-General'.  What Jim was alluding to was the marriage of May to Hallam in July of that year.  Both were free to marry but the reason for the secrecy may well have been because of the events which had preceded the marriage. Hallam had been married to Audrey Boyle in 1884, inheriting his father's title on the poet's death in 1892.  They had three sons, Lionel, Alfred and Harold, all of whom served in the First World War. Harold died in 1916, aged 19, when his ship, the Viking, hit a sea-mine in the English Channel. Possibly due to the affect of this tragic loss, Audrey died in December of the same year. In March 1918, Alfred died in action at the Somme.  Even though he had been a widow for two years, it is unsurprising that May and Hallam wished to get married quietly in the midst of such sadness.  They were wed at South Stoneham Church, Southampton, on 27th July 1918.

﻿
As Lady May Tennyson, she kept Monkshatch in Surrey, but also lived on the Isle of Wight at the Tennyson family home, Farringford. She became a benefactor for local causes, helping to set up a local cottage hospital, a cause dear to Julia Margaret Cameron's heart during her time in Freshwater. In 1925, May donated £800 to purchase an ambulance manned by volunteers and administered by Miss Waistell and Miss Life, members of the Red Cross...

In 1928, Hallam died at Farringford.  May moved to the Dower House at Glenbrook St Francis, overlooking Freshwater Bay.  Dower House is the house nearer the sea in the image below.  Here she established a library of improving books. 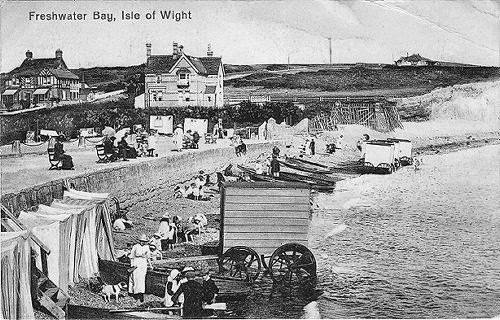 She died 19th July 1931.  Hallam is buried in the family tomb at St Mary's Church at Freshwater, alongside his mother and first wife.  On the wall of the church is a plaque to May...


May was cremated and her ashes returned to Compton where she shares her final resting places with Andrew Hichens...


So ends the story of a beautiful woman, much loved and remembered by the Tennyson Memorial Ambulance, still running today (they renew the model regularly, its number plate VDL1).  The title of this piece comes from an article by Blanche Warre Cornish in 'Personal Memories of Tennyson' (published in the London Mercury, 1921-22).  Warre-Cornish remembered the poet laureate, walking through Freshwater on a sunny day, a verse or rhyme for each friend or child he passed: 'Good Morning May, / May you never be June for the ever-loved May, once May Prinsep, as she stood in the green porch of Mrs Cameron's door.'

It seems right that a woman who held so much affection for both her family, her adopted family and the people of her community should herself be remembered with love.