It has been mentioned to me on a few occasions that I am rather prone to change my profile picture regularly.  For reasons numerous and complicated I seem to have a compulsion to take and change my pictures, but part of it is that I am rather accomplished at the art of the self-portrait or the 'selfie'. It's all to do with angle and lighting (thank you Kim Kardashian) and by manipulating these I can give you an impression of what I am like.  In real life, I am a little awkward, talk either too loudly or too quiet, cannot express myself as well as I can in type, but in the silent, static image I can control what you think of me.  Well, sort of.

A self portrait is the ultimate act of persona control - it enables the viewed to set the message for the viewer.  For an artist it has an added dimension - it also says 'look how good I am at my art'.  In a heady mix of personal image and display of talent, the self portrait tells us a lot about the artist and their world...


Before and after Pre-Raphaelitism, we have the most successful of the Brotherhood, with two of his self portraits.  Eager, young and vivid, young Millais holds his palette and looks to us in readiness.  Older Millais stands still for us to admire him.  There is a connection in the way Young Millais looks at us, directly at his audience, his customers.  He needs to connect with us, not just artistically.  You could cynically say he wants to be recognised, needs to see our response, needs us to feel a connection so that we will buy his work.  Older Millais slips into shadow, is a man being looked at and does not need to be assured of our interest.  He already knows it.


The two self portraits by Rossetti are often the subject of very academic discussion about whether or not he was ever 'really that hot' (technical term) or whether the later portrait was more honest. In his youthful portrait, he looks romantic, Byron-esque, appropriate.  In his later picture, he looks serious, adult, possibly befitting his new role as husband and serious artist/poet.

Rossetti's self portraits give the impression of a more private audience than Millais was expecting.  Possibly the sketch-quality of Rossetti's portraits gave the impression that he intended the pictures for an intimate circle, as mementos of him.  Millais', especially the latter image, are public pictures, an official image of the artist.

The semiotics of self-presentation are complex.  It can go beyond 'here is my palette, here's how I paint' to incorporating a background hinting at style, influence, taste.

Sometimes people are so famous they do not need clues.  Possibly the most famous artist of his era appears in Doctor of Civil Law robes, his Royal Academy presidential medal just seen.  The classical frieze behind him hints at his artistic nature, his style and leanings.  In the 1888 portrait by G F Watts, Leighton appears in similar dress but a palette and brushes are beside him.  Possibly as the above painting was a self-portrait, Leighton felt it would be superfluous to include the tools of his trade.

The act of painting, the method and skill is most amply expressed in Headley's self-portrait of 1895.  The vase which holds his brushes, together with his hat and gloves shows his taste.  The mirror is a pseudo-honest way of showing how the portrait was achieved but also is a clever trick.  You the viewer are stood where the artist should be.  We are both admiring his work while holding his place.  It is sly humour and we share the joke.

Like Leighton, Corinth does not need to tell you he is a painter.  At first I wondered if this was a comment on war due to the date but there are earlier images of him in armour.  It is a comment on Corinth as the man, the knight, the protector.  He is a man in archaeic dress but his painting style is erring on the modern.  He is a contradiction, a statement.  This, however, is not the most provocative self portrait that Corinth painted...

Potentially uncomfortable at dinner parties, the Corinths leave little to the imagination about their lifestyle.  The champagne glass echoes the breast clasped in his other hand, his model and his drink both acting as pleasures in the artists life.  Behind is not an easel, but a table of food and drink.  The Corinths are about the good life and their intimacy involves the viewer in a rather startling manner.

Speaking as a woman (hello, where are we going with this?) image today is a precarious balance of attractiveness and competence, both seemingly and worryingly distinct from each other.  Maybe it was ever thus and maybe so for men too, but you wonder if there was that choice to be made for women artists.  Should you show your best side, or should you be more than honest, possibly brutal?  Comparing Siddal's portraits by her lover, which are kinder, softer to her own image of herself, it is possible to see it is the same woman but she has exaggerated her palour, her hooded eyes, the starkness of her expression. It is how she sees herself, a self assessment without compromise or flattery. Is it about her as worker rather than her as muse?

Given that this is a period where women artists were still considered 'hobbyists' it is perhaps unsurprising that they would add more gravity to their image, reflecting the struggle to be taken seriously; a woman who appears with the tools of her trade, ready, able and serious in her task.  There is no frivolity, no pandering to vanity in Harrison's self portrait above.  It's not that she isn't a good looking woman, it's just if you compare for example Leighton's magnificence with Harrison's subtle richness, the emphasis is on the sharpness rather than the attractiveness of the subject.

Entitled Self Portrait at the Dressing Table, Serebrjakova demonstrates that it was possible for a female artist to exploit a muse cliche and show herself combing her hair in underwear.  Reminiscent of Rossetti's women in the 1860s, the artist appears with the accoutrements of feminine charm, but she is a mirror image, signified by the candle on the left hand side.  The artist has painted herself as an impossible reflection.  Unlike Headley who seems to be caught in the act of painting himself, Serebrjakova is preening, possibly as a comment on what society expects her to be doing in a mirror rather than what she actually was doing. Whether this contradiction was caught by her audience is another matter.  It might just be that Serebrjakova knew a picture of her in her underwear would sell possibly better than one of her looking studious.

With the advent of photographic self portraits, the notion that the camera was the medium of unartistic truth was shed almost as soon as it was assumed.  By the turn of the twentieth century, artists such as Coburn, above, could present themselves as avante garde young men, just as much as an artist like Maxwell Armfield...

Armfield's portrait has gone beyond just one man's self portrait to encompass all young men of his artistic leanings.  More than any other selfie I have seen, Armfield is not only himself in his tempera vision, he is all men of that aesthetic, sensitive beauty with pink bows, flowers in wine glasses and the beauty of decorative art surrounding them.  He is a man, he is an art movement and he is only 20 years old.

The nuanced difference between portraiture and self portraiture may be slight at times.  If someone has a say in what image is taken of them, is shown of them, then in a way the only difference becomes the display of talent.  A self portrait is control of image, a parcelling up of what people will get from you.  Are you serious?  Are you precise?  Are you a big letch and a drinker?  All can be shown.  The colour, the shadow, the background, dress, undress - all tell you something of the person you are buying into either ideologically or literally.  With Armfield you are buying an aesthetic young man with dandyish tendencies, with Leighton you are buying the establishment.  So what do I want you to buy into with my image? 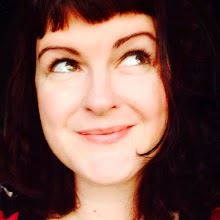 I'm not sure, but it will probably be different next week....
Posted by Kirsty Stonell Walker at 18:31