If you are unable to get to Exeter this Spring to see Art & Soul: Victorians and the Gothic (website here), then I may have a solution for you.  The lovely people at Samson & Co have sent me a catalogue of the exhibition, and here is my review... 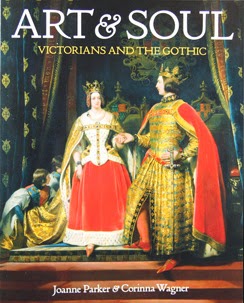 I hadn't really thought about it, but if you use the words 'medieval' or 'gothic', then you probably aren't using them in the same way as a Victorian.  In fact, after the advent of the film Pulp Fiction, to 'get medieval' on someone implies a swift and brutal end, and saying that someone or something is gothic is more to do with black nail varnish than arched windows.

Before Thomas Dudley Fosbroke coined the term 'Medieval' in 1817, the period between the 5th and 15th century was known unimaginably as 'the Middle Ages', that is the bit between 'bye bye Romans *sniff*' and 'it's all got a bit Tudor-y'.  That in itself got split when the early part of the Middle Ages became known as the Dark Ages.  Nobody liked the Dark Ages.  Gothic was used not specifically to describe the Germanic tribes that had migrated north in the 5th and 6th century (as the Romans had used it), but to describe culture in the Middle Ages, then the heavy typeface and architecture in the 19th century.


The Victorians loved history in a similar way to us, but for them the chance to own it through image and word was a novelty.  The Victorian year was filled with anniversaries of battles, coronations, executions, and books on all time periods filled the shelves of libraries everywhere.  This wasn't just a time of knowledge and learning, it was also an expression of the intense anxiety about the future.  If learning about history told them anything it was that not even the best society in the past was safe from destruction and steps forward in science showed how species, like nations, could vanish.  There was a move to protect the history of the nation with groups like The Society of Antiquaries and SPAB, plus an effort to collect folk traditions and songs.  Public galleries opened and a taste for images of the past, brought vividly to life, could be seen by everyone.  The imagination began to run scared from the present and the furthest it could go back was the Medieval period.  It was the first British period to be fully documented and had an aura of a pastoral golden age.  Even Gothic architecture was seen as more organic, more in touch with nature and not a product of the scary industrial world.


Industrialisation had revolutionised the lives of ordinary people but in the generations after, it began to be seen as a cause of a loss of craftsmanship, pollution, bad housing, dangerous machinery, poor health and generally not improving the lot of workers.  During the 1840s, the 'hungry 40s' as they were known due to food shortages, the Medieval period was seen as a time of a more natural way of life and bountiful food. As a flipside of that, do you think our nostalgia for rationing in the 1940s and 50s is an expression of our obese society now?

No-one was safe from this nostalgia, even if you were Queen.  Victoria and Albert embraced the medievalism which fitted with her Germanic roots and they were portrayed in art and sculpture as the perfect Medieval couple.  Even a spot of Viking heritage was reflected in Alexandra of Denmark, thereafter Princess Alexandra after her marriage to Albert Edward.  Tennyson described her as the 'daughter of the vanished Vikings'.  Again, it's interesting how the use of that word has changed.  Viking now tends to be more complex than the rape 'n' pillage stereotype, although the splendid recent tv series lobs in more violence than trading, but for the Victorians, the Vikings were noble warriors, reflected in romantic adventures by writer like Walter Scott and Charlotte Mary Yonge.


It would be impossible to talk about the Medieval without talking about King Arthur.  Not actually a king, but promoted by Geoffrey of Monmouth in his 12th century History of the Kings of Britain, then compounded by Mallory in his 15th century Morte d'Arthur which added round table, grail and Arthur's death to the existing legend of wizards and magic swords.  The pinnacle of this king-worship has to be Joseph Comyns Carr's play King Arthur of 1895, produced by Henry Irving, music by Arthur Sullivan and sets and costunes by Edward Burne-Jones.  A veritable who's who in artistic Britain, it's source material was Idylls of the Kings by a man who carries quite a bit of responsibility for the Arthurmania, Alfred, Lord Tennyson.


Oh, Tennyson, you've got a lot to answer for, not least the Elaine of Astolat variation, The Lady of Shalott.  Between 1862 and 1913 more than 26 paintings on the subject were exhibited and people had been inspired to create pictures and illustrations both before and after that main period.  For the Victorians, Tennyson and others inspired by the Medieval maidens were both supporting and challenging the sexual status quo; the women were maidens in distress, separated from society in towers, waiting to be rescued by daring men, but they were also sexual transgressors, destiny-seizing creators of art sacrificing their lives to be free.

Craftsmanship was re-embraced by Morris and Co who mixed Medieval designs with the desire to bring the 'joy' back to the workplace by removing industrial drudgery.  The firm produced furniture, tapestries and stained glass panels.  Morris was also responsible for the Kelmscott Press bringing a level of craftsmanship to book production hot on the heels of the industry's ability to mass produce.


Gothic and Medieval crept into every aspect of Victorian life, from the designs of the Houses of Parliament down to what your face looked like.  One of my favourite influences of medievalism is the notion expressed in the catalogue that the Victorian beard was a by-product of the fashion for Anglo-Saxon chic.  Beards were not fashionable in the 1830s and 40s but grew in popularity, coupled with some extreme fashion for armour, as worn at the 1839 Eglington Tournament. How we think of the Victorians to cultural products which we regard as being typical of the era are all infused with the cultural influences and historical aspersions of the thousand years that became the Medieval period. However you look at it, the two are arguably inseparable and change the way you look at the period and possibly reassess our own.

The catalogue by Joanne Parker and Corinna Wagner is beautifully written and richly illustrated.  Without knowing it, sometimes we forget exactly how pivotal the notion of Medieval is to the Victorians, both in fact and developed fantasy.  It shaped and changed society, expressed an interest in the past and their terror at the present and future.  In many ways it made me reflect on our current concerns with the past and how we are not so very different from our Victorian forebears.