Once upon a time there was a girl called Miss Lovely.  She married Mr Grumpy and went to live in a land where no-one smiled.  Then she met Mr Hot Artist and everything was alright.
The End. 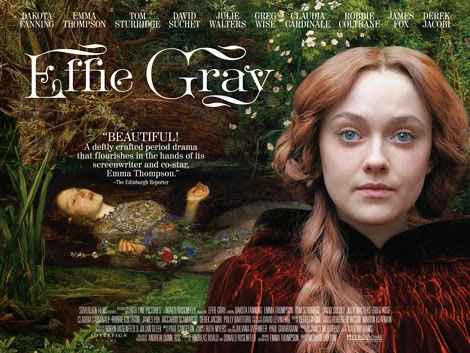 I cannot remember a film I felt such consuming anticipation for like Effie Gray. Much like Desperate Romantics, I was so eager for it to be here that it overcame any reticence I felt about having fact brought to the screen as entertainment, but if Desperate Romantics has taught me anything, it is knowing a lot about a subject can colour the way you view poetic licence.  I better start with what I liked about the film...

It is very beautiful to watch.  The colours, the scenery, the fact that a film is addressing the work of the Pre-Raphaelites - all these things made it a delight to watch.  The film is packed with acting talent and no-one gives a bad turn.  I think my favourite has to be Julie Walters as Effie's Monster-in-Law, truly the most grim mother to grace the screens in ages.  Emma Thompson looks gorgeous as Lady Eastlake, with the biggest hair and the most sensitive approach to Victorian marriage.  The costumes were astonishing, and the echoes of paintings of Effie in Scotland were much appreciated.  I also wondered if the constant loose hair and candle-light poses were meant to be reminiscent of The Bridesmaid, hinting at Effie's sexuality, awaiting reception.  Denmark Hill was a palace with claustrophobic layers of sumptuous fabric, wallpaper and furnishings, a gilded cage indeed.  The contrast of the little Scottish cottage was beautifully rendered, leaving you in no doubt which was preferable.

So to the things that I didn't like - Greg Wise did not crack a smile for the entire 100 minutes.  Holy mother, are we to believe that Ruskin, for five whole years did not have a chuckle?  Ruskin is a pantomime baddie, stony faced, weird, a little Norman Bates-y with his mum and, forgive me, too old.  There is a big difference in a man of 30 who is treated like a baby by his mother and a man of 50.  When Dakota Fanning (with a decent accent but no life in her voice) looks so very young and Bambi-eyed, to match her with a grayed-up actor is taking a very particular angle which is unfair and untrue.  Flashing back to Ruskin's attention to the child-Effie, to his attention to little Sophie, he looks like a pedophile, the archetype of sexually perverted old Victorian man.  All nuance of Ruskin's character has gone to this one note.  We did not even need to have him point and scream at Effie's lady-garden, it's too ingrained in pop-culture.  It is now set in film.  He saw her naked, he recoiled and ran away because she was a full grown woman.

The Italian adventure seemed too long and a little pointless other than to show us Ruskin was weird even without his parents around.  I like the hot Italian chap who was given more to do than Millais and managed to give a saucy character to his scant screen time.  However, it really only felt like a delay to getting back to London, to Millais and the ill-fated trip to Scotland.  I really wish that Millais had looked less like Rossetti and that he had been given more to do other than look hot and concerned.  Oh and a bit naked.  That should have been under the stuff I liked.  Shame on me.

It's no secret that I'm Team Ruskin, so it's not a surprise that I didn't really like the hatchet job done on the man who ensured the continuation of Pre-Raphaelite art.  However, the title of the movie is Effie Gray, and so in many ways all the problems, the layers of character that explained his behaviour were unnecessary.  John Ruskin was unknowable to Effie and so it could be argued that he should remain so to the audience.  There is no doubt that she hated him by the end of their marriage and all his imperfection, cruelty and damn-right weirdness should be reflected in the film that bears her name.  However, and this is a massive however, a film is believed to be unbiased in its narration.   We are shown scenes of cruelty strong and poetic and they seem to be fact, but really none of what you see is pure truth save that Ruskin and Effie were married and then it was annulled due to non-consummation, all else is 'he said - she said'.   I only hope that viewers of the film seek out both sides of the story before making up their minds, and maybe the best thing about the film is that it will bring more people in to appreciate Pre-Raphaelite painting and the fascinating stories behind the art.