Coming Soon to a Cinema Near You...

You know how it is - you're minding your own business on a Friday afternoon, posting a picture of a wombat, making plans for the weekend, and then this happens... 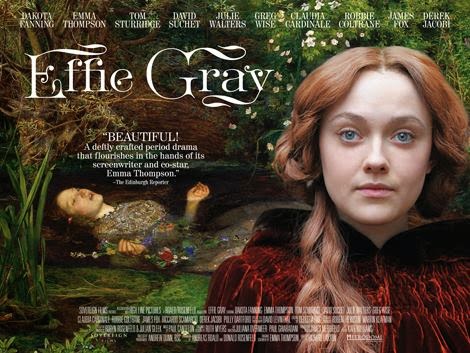 Yes, finally a release date, a poster and a trailer for the much-anticipated, long-awaited film about Effie Gray and her ill-fated relationship with John Ruskin. Having waited what seems like forever for the film to be released, suffering many delays and deferrals and watching as Emma Thompson, writer and star, fought valiantly through the courts, finally it will be here in October.  So why aren't I delighted?

For starters, of course I am looking forward to seeing the film.  It's about the Pre-Raphaelites, for goodness sake, and so it would be churlish and counterproductive of me to not want to see a film about the thing I love.  It is also jam-packed with splendid acting talent and comes to us from the hands of Emma Thompson who is marvellous in everything she does.  I'm sure I will enjoy it because on that score I enjoyed Desperate Romantics.  Nice costumes, everyone acting their socks off, all splendid.  I'm also sure the story will be gripping.  Mind you, that might be the problem...


Sometimes the problem with a really good story is that it tells you more about the audience than the people involved in the story.  What we know for sure, for absolute certain, is that John Ruskin married Euphemia Gray and then five years later their marriage was annulled on the grounds of non-consummation.  They both agree (separately) that the reason that the relationship was not consummated was because Ruskin found her 'person' disgusting.  Nothing to do with public hair, menstruation, little girls, little boys, big boys or anything.  Therefore I trust that Emma Thompson has not got a scene in the film where Effie disrobes on her wedding night only for Ruskin to start screaming 'LADY PARTS! LADY PARTS! THE HORROR!' (much in the same way that I trusted that Fanny Cornforth wouldn't be cracking walnuts with her teeth in Desperate Romantics)...

Another universally acknowledged 'fact' is that she was around 9 years old and he was 107.  Well, again, does make a lot of sense because he liked little girls didn't he?  And all Victorian men preferred infant wives who were merely decorative or playthings for their disgusting lusts etc etc.  Actually at the time of the marriage Effie was 20 (or nearly so) and Ruskin was nine years older.  Greg Wise, a marvellous, talented actor, is around twenty years older than the part he is playing.  He is basically playing the older, more familiar Ruskin: beardy old Victorian who looks grumpy all the time.  Even lovely Tom Hollander was over 40 when he played Ruskin in Desperate Romantics.  Why are we unable to see a younger actor take the role?  Would it make it too complicated for audiences to see, for example, Rupert Friend, rather handsome and age-appropriate as Ruskin?  It certainly isn't as punchy a story - two adults marry without knowing each other properly and find out they drastically don't get along.  The husband refuses to have sex with a woman who wasn't what he believed she was.  Woman is left alone with nothing to do trapped in unhappy marriage.  They get marriage annulled.  I'm not sure I'd go and see a film about that.  However, is it okay to always assume the woman is always the victim?  Does there need to be a clear-cut 'victim' and 'culprit' in every situation?

The Victorians, much like us, love to apportion blame and back in the good old days all the blame would obviously be heaped on the woman.  That is rubbish for all involved and so I don't blame Team Effie to want some payback, after all in order to get the marriage annulled she had to go through some god-awful tests and risk utter ruin for something that wasn't her fault really.  But then I'm not convinced it was Ruskin's fault either.  However, for ever more it has become his fault, eternally the fault of the old, weird, gay pedophile who could not bare his wife's pubic hair.  That is some hatchet job.

Also, what seemed to enrage others on Friday (I was too busy wailing over the age of Ruskin) was that Millais looks exactly like an identi-kit Rossetti, all Byronic and moody.  On a side note, the actor Tom Sturridge is exactly the right age to play Ruskin.  Oh, the irony!

Look, you don't need me to tell you to go and see it, it will be wonderful entertainment and no doubt a feast for the eyes.  I'd love to see more Pre-Raphaelite films, so let's make this one a success as I'm sure it will be.  However, you are all smart people who read and question accepted biography, don't forget to remind people that the film is just entertainment.  After all, the last time I saw Fanny Cornforth on screen, she was a nut spitting, illiterate cockney prostitute...

Effie Gray is out in the UK in October and you can have a look at the trailer here.
Posted by Kirsty Stonell Walker at 14:28