A Pick and a Pasty

Here is part two of my holiday, and it was one of the unexpected highlights.  A shocking fact is that Mr Walker doesn't want to spend every waking hour at Victorian art museums.  I know, and I married him.  In fact, there are times when he wants to visit somewhere else.  That's how we ended up at Geevor Tin Mine... 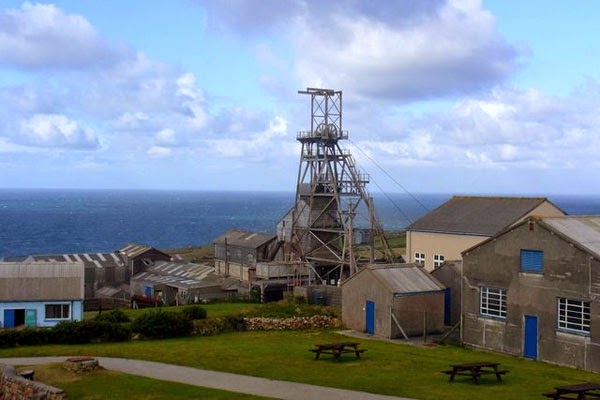 Actually, I was happy to visit a tin mine museum due to a family history of Cornish miners, plus Mr Walker's Grandpa was a coal miner in the Midlands, so it seemed appropriate to be heading underground.  Having spent the day before in the Eden Project with probably every single person in Cornwall (to say it was jam packed seems an understatement), the large, airy space and peace of the mining museum was a blessed relief, and the collections were amazing.  My favourite object had to be this picture... 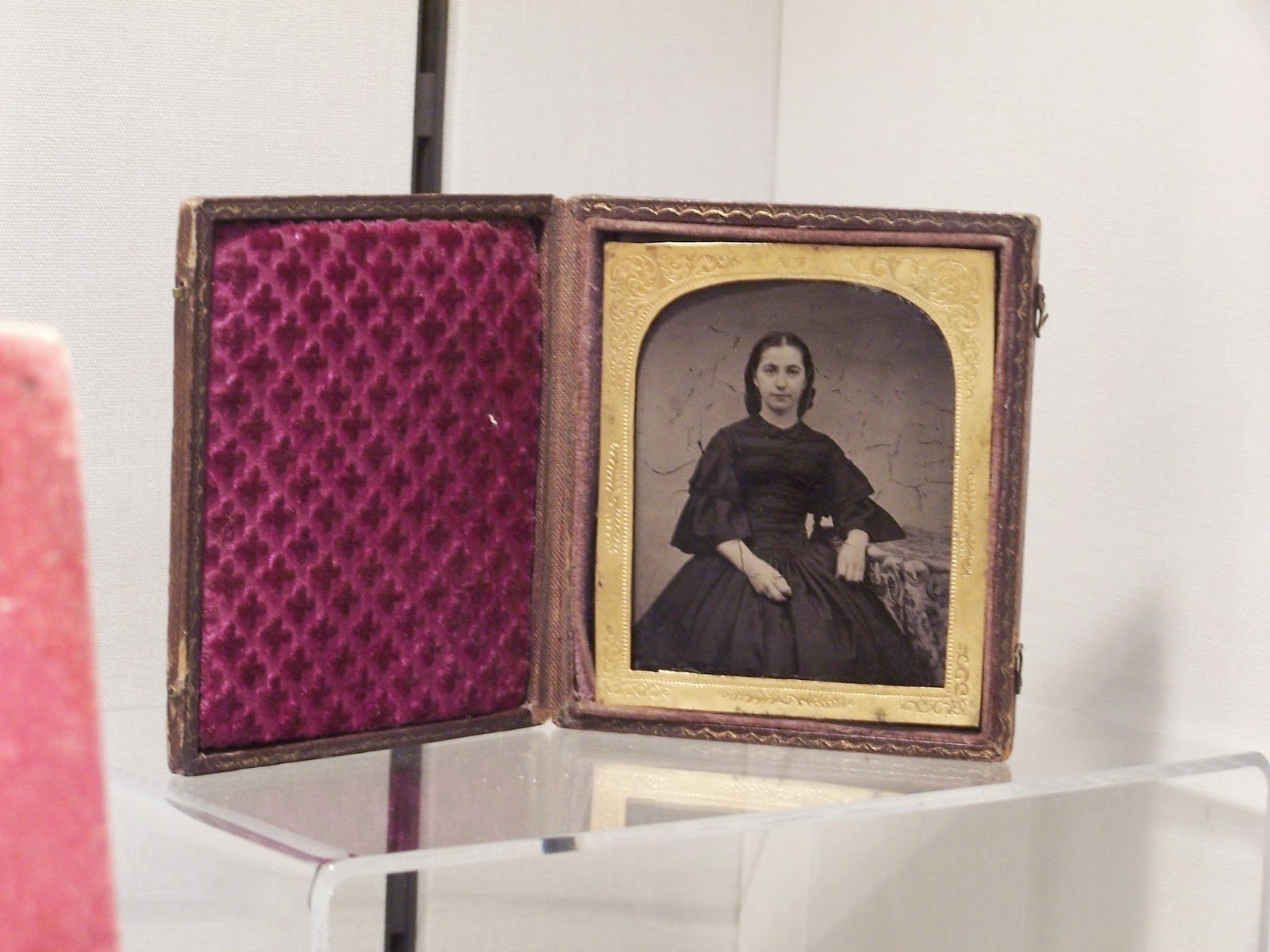 This lovely lady was 17 year old Elizabeth Hill Chappel, who was married to Henry Chappel.  Shortly after their marriage, Henry went to work in the gold mines in Bolivia.  He wrote regularly, enclosing small amounts of gold, but then all of a sudden the letters stopped.  I would assume Elizabeth feared the worst until Henry returned two years later to discover that someone had been stealing his letters and the gold he had been sending. 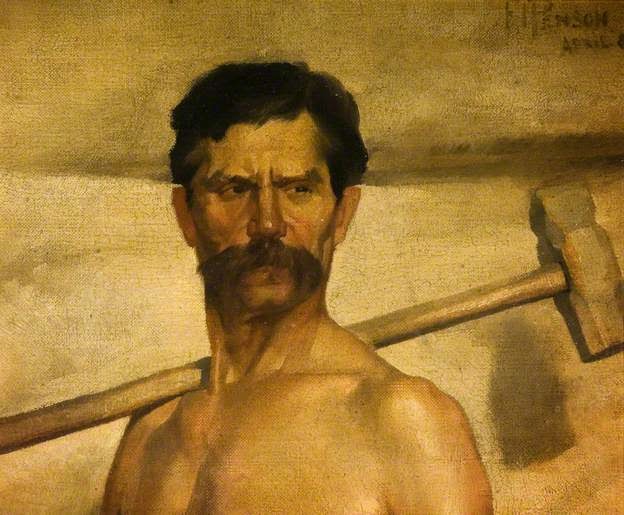 Anyway, this got me thinking about Victorian images of mining.  I suppose it would be easy to have a romanticised image of the profession, such as this handsome chap on our left: big strapping men, with big strapping mustaches, swinging all manner of heavy instruments underground, probably bare chested.  Goodness.

However, these days it's hard to get away from the truth, especially here in the Walker household. Grandpa Paddy Walker, the miner, was involved in the 1956 accident at his West Mindland's pit which cost many men their lives.  Paddy was trapped by some lengths of timber which created a 'teepee' over him and saved his life.  Unsurprisingly he was a hard father, but by all accounts a great Grandpa and I'll never forget him crawling on the floor, aged almost 90, after Lily-Rose, his great granddaughter.

On the whole, there are not as many images of Victorian miners and mining as I expected, although what there is strikes me as interesting.  I wonder if it was because it was underground, unknown unless you ventured down yourself, therefore not easily observed from a safe distance.

Maybe the art buying public didn't go for images of men doing a grubby, necessary job underground, so the images are like this one, in the open air, with healthy, ruddy cheeked men swinging their enormous picks and hammers at rock.  These pair have a young lady watching, with a toddler.  I'm going to guess that the baby is her sister and she is deciding which of the fine young mining men she is going to marry.  I hope she has brought enough pasties for everyone.

From pictures like this you would be forgiven for thinking that mining was a reasonably clean and healthy occupation.  I especially like the blue socks and blue hat.  I tend to think of blue when I think of Cornwall, all that sky and sea, and the shade used in this picture is beautiful.  I wonder if they are meant to be father and son?  The wonderful assistant we spoke to at Geevor said that there was a proud tradition among the mining families in Cornwall that sons followed fathers in to the pit.  This contrasted with coal mining where, like the Walkers, you didn't really want to have your son follow you underground.  Maybe that was a sentiment from the twentieth century where there were finally felt to be choices.  It certainly wasn't because the job was safer in Cornwall - we read in awe of how they mined right out beneath the sea, following a seam. 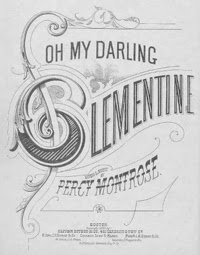 If I can just wander off the point for a moment, a famous Victorian miner has to be M'darling Clementine's father, who was involved in the 1849 Californian gold rush (hence 'a 49er').  I hadn't really thought about how odd the lyrics of this song from the c.1860s are, but they are rather funny.  Poor old Clem has enormous feet, falls over a splinter of wood and drowns because her beloved can't swim.  He can, however, get over her loss by kissing her sister.  Hmmm, all very Victorian I'm sure.

There are images of nineteenth century miners all over the world, for example this picture of Fossicker, or gold miners, from Australia.  Possibly the term 'Fossicker' gives another hint of another reason why images of mining were not prevalent. One 1850s definition of 'fossicker' is a troublesome person, and so perhaps the side of mining and panning that could result in riches was seen as morally problematic.  Maybe that's why Clementine was drowned, as a punishment to her get-rich-quick dad. 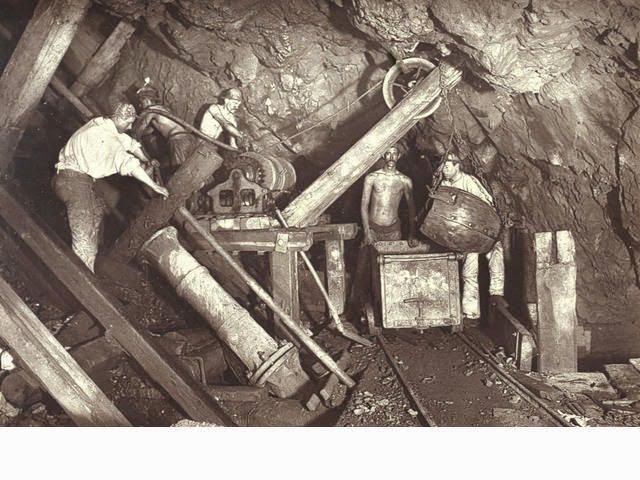 In a way, painted images of Victorian mining are almost unnecessary as J C Burrows was commissioned to take photographs underground in 1890.  These were published in the book Mongst Mines and Miners: Underground Scenes by Flashlight which was used as a guidebook to the industry towards the end of the century.  The stark images are unblinking in their honesty, and the scenes seem precarious, dirty, cramped and hard.  There is nothing easy here and none of them will get rich from their hard work.

Next time you are enjoying a Cornish pasty, think of the miners.  The pasty was made with its rolled edge so the miners could hold that bit with their grubby hands and eat the rest.  And they are delicious.  I bought a lovely book about Cornish food and festivals just so I can bake marvellous pasties at home. I'm grateful that we don't have to go down a mine to eat them.

To visit the wonderful Geevor Tin Mine, see their website (here) for details.
Posted by Kirsty Stonell Walker at 09:29