Selling Art and Heart: The Perils of Auction

Today was the auction at Christie's that featured Isabella and the Pot of Basil... 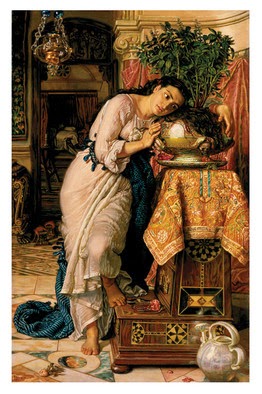 Now, as you will remember from my last post, Delaware Art Museum were selling this picture in order to fill some of the fiscal hole they had dug themselves into.  They were looking for £5m to £8m from the sale.  They made £2.5m.  There was no reserve and so it sold for half of the lower estimate.  This defies belief on many, many levels and now begs the question if the Hunt failed to earn them enough, what else will be added to the auction block so that Delaware can continue to exist.  I don't see it as karma, I wish they had earned as much money as that painting was worth, more even.  Now we have to wait and see what the feckless board of Delaware will do next.  My sympathy is with the staff of the Art Museum who have to be on the front line of this situation, taking the flak.  I bet it isn't a member of the board answering the phone or manning their Facebook page today.

Moving on, the rest of the sale was a very mixed bag.  Starting with the bad...

There were a number of passes (or no sales) in the auction including this beautiful work by Arthur Hughes, which fell short of it's estimated price £150,000 (it only reached £95,000).  Likewise Millais' portraits of The Very Reverend Thomas William Jex-Blake and Mrs Henrietta Jex-Blake failed to make their reserve and weren't sold.

The set of Grimshaws on offer had mixed fortunes.  An Autumnal Glow surpassed its £150,000 top limit and selling at £170,000.  However, four of the five other Grimshaws either didn't make the bottom limit or were just not sold.  Only View from Blackfriars Bridge by Moonlight made £160,000, the middle of the estimate.

So, what did well?  It was a good day for the women artists. Eleanor Fortescue-Brickdale's Lancelot and Elaine made £2,000 more than the top estimate (ironically the same amount the her friend Byam Shaw's picture made below his bottom estimate).  This beautiful gem from stained glass artist Margaret Agnes Rope went soaring past its £6,000 to £8,000 estimate and came romping home with £22,000... 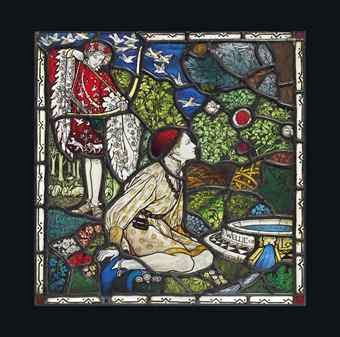 Marie Spartali Stillman's A Lady with Peacocks in a garden, an Italianate landscape beyond made £8,500 and Mary Louisa Gow's A Kiss Goodnight made £16,000.  Big result of the afternoon has to be Elizabeth Siddal's St Agnes Eve which was valued as between £2,500 to £3,500 and was sold for £13,000.

So, to sum up, many of the beautiful Pre-Raphaelite pictures did not perform well in the auction this afternoon.  You would think that Rossetti would be a safe bet but his art only just made bottom estimates or faltered around the middle.  Hunt's A Staircase at Rochester Castle, Kent ploughed past its £10,000-£15,000 estimate to make £38,000, which makes no sense in respect to how badly Isabella did.  Maybe it came down to bad press, and Isabella had become tainted in the light of the outcry against Delaware.  It was good to see how well the women artists did, but again women artists have been gaining popular reputation lately with some good exhibitions and a tv series to boost their standing.

The stand-out lot in terms of the amount of money it raked in was this one...

For twentieth century figurative, give me pink and nudie every time.  This is beautiful and made £75,000, just below its upper limit.

The thing to remember after what was a genuinely upsetting afternoon is that although Isabella has presumably gone into a private collection, maybe the person who calls it their own tonight will value it more than the board of Delaware Art Museum.  We won't get to see it very often, maybe very little, but it still exists and possibly in safer hands tonight.  I think a bigger worry is what will now happen with Delaware and their financial problem.

We wait and see.  Nervously.
Posted by Kirsty Stonell Walker at 21:06