Hello again, and here is the second review of this weekend.  Today I'm reviewing a splendid novel entitled That Summer by Lauren Willig... 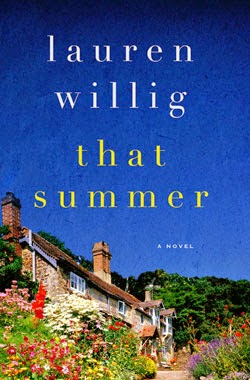 That Summer has a dual timeline telling two intertwining stories.  In present day America, Julia Conley learns that she has inherited her great-aunt's house in London.  She's not been back since her mother died when she was six, but her return to England awakens some ghosts from her past.  When clearing the house she finds a Pre-Raphaelite masterpiece hidden in a false panel in a wardrobe.  How did it get there and what did it have to do with her family?

In 1849, a young woman trapped in a loveless marriage falls in love with a Pre-Raphaelite painter who has come to paint her portrait.  His admiration of the medieval artefacts that fill her home cause the two to be caught up in a romance that plays out in life and on canvas.

I liked this book because it reminded me of two of my favourite novels.  It obviously bears comparison with Possession by A S Byatt due to the dual timeline and Victorian subject matter, but it also reminded me of Michael J Bird's Maelstrom (based on his tv drama), a tale of a woman who inherits more than merely bricks and mortar.

I felt the pacing of the novel was great, each time period leaving you with a cliffhanger, drawing you back in when you returned.  I liked both Julia and Imogen, the two women in the story, and found Julia's view of England very interesting. It's always fascinating to read a familiar thing through someone else's eyes. It isn't easy to slot a fictional artist into the Pre-Raphaelite brotherhood, but with Gavin Thorne, Willig has made someone who is believable and familiar, without being an amalgam of other members of the circle.  He seemed distinctive and you almost felt like you should of heard of him.  I'll come to his name in a moment...

I liked both parts of the story, did not see the twists and turns coming and really wanted to be left a big rambly house filled with hidden treasures, thank you very much.  I pretty much read it in a day, which was a pleasure as I don't often get a day spare to read in and it was serendipitous that I had such a lovely book to spend the day with.

Now, a couple of notes of caution.  The Pre-Raphaelite artist is called Gavin.  That did jar a little as Victorians were not really called Gavin.  If you know just reading the name that you will not be havin' the Gavin then this is not the book for you.  There are a couple of other things that are niggly (endless teacakes that aren't teacakes/'I'm parked just down the block') but for me, the pleasure of the book was enough to get past these and just enjoy it.  You really do care about Imogen and Gav, and what Julia will find out, plus as  Pre-Raphaelite art historian I enjoyed the vicarious pleasure of finding it out alongside her.

So, in summary, this was a marvellous read, speedily consumed and perfect in its subject matter.  Any pickiness I might have felt about niggles were completely outweighed by how smoothly you are taken in to the story and how much you care about the outcome of both stories.  A worth addition to the Pre-Raphaelite fiction library and a book I will gleefully recommend for summer reading.

That Summer is available from Amazon US here and Amazon UK here and from all splendid bookshops.

Posted by Kirsty Stonell Walker at 07:38