Public Nudity, But Not Mine

It is certainly hot today.  I have retreated into the front room, onto the sofa with the computer, to wait for it to cool down.  Then I have to do some gardening again.  What I shan't be doing this afternoon is wearing a lot of clothing, rather like this lady...

This post came from me finding an image of Lady Godiva and I thought  'I wonder if the Victorians did a lot of pictures of her?' Of course they did!  That should not even be a question because what can be a finer subject for a painting?  You've got boobs, hair and a horse!  What more do you need?  Plus, she was doing it all for the relief in taxation.  What a woman!

Possibly the best known of all Godiva images has to be Collier's.  I find the modern homages to the Godiva image tend to echo the simplicity of Collier's vision.  Woman, horse, not a lot more.


What I find interesting about Collier's Godiva is that although she has a handful of her hair, it is not obscuring her pink bits in any way at all.  A keynote of the Godiva-look is that she is clothed in her hair.  Collier's lass is not covering anything up.

So what's the excuse for all this lady-flesh?  Once upon a time in Coventry, there lived a lady called Godiva who was married to the fabulously named Leofric.  They were a jolly couple, giving lots of money to religious concerns and the suchlike.  However, the legend has it that Leofric was a bit heavy with the taxes.  Lovely Lady Godiva pleaded on behalf of the people of Coventry and her husband said 'I'll lower the taxes when you ride through the town naked!'  I believe that is the very moment that Blair Leighton is showing us.  You can see Godiva thinking 'I do have rather long, thick hair...'

So, Lady Godiva, not being easily fobbed off, went to her room and stripped off.  A message was sent around the town that if they fancied having low taxes then everyone ought to go home, shut the curtains and not think about peeking at the nudey lady who was about to trot past.  Obviously.

Seemingly a quite popular moment to depict is when Lady G gets her kit off and sneaks off to find a horse.  Sharp shows her modestly covering her right knee (it would be terrible if someone saw that) while tiptoeing off to the stables.  Her lovely white horse is awaiting her with a saddle.  I'm not sure if a saddle is a good thing or not in this situation.  Corbould's Godiva is rather pneumatic, isn't she?  I'm not sure what to make of her jelly-mould boobs, and again, that right knee stays carefully concealed.  Am I missing something?  Is the most erotic part of a lady her right knee?  There is rather a lot of brambles and pointy brickwork in Corbould's scene.  Ouch.

I notice Landseer's Lady is riding side-saddle on a lovely comfy cloak.  I wonder if her prayer contained lines about not falling off or getting lost or bees.  She's probably hoping that everyone got the message about not peeping too.  I'll come to that...

So here she is, trotting off around Coventry.  In some versions she is being led by a nun which means she can ride around with her hands crossed over her wobbly bits.  I find the images where she is in a cringe of nude-y shame rather irritating.  Come on, if you're going to do it, have a bit of fun with it.  After all no-one is looking and you are getting to ride about the town with no pants on.  That's fun!  If you're really worried, fashion yourself a sort of bikini with your hair because on a health and safety note, you'd be better off holding on to the reins.

There are some rather glorious statues associated with Godiva riding about in Coventry, and I do love a bit of statuary...

Here we have a rather noble lady, getting ready to bare all for tax relief (and who wouldn't?).  If you had to name the subject without the title, I think you would be rather hard-pressed because she really is just a rather thoughtful woman in oldy-worldy dress.  The following one leaves you in no doubt, however...

Naked. Hair. Horse.  Could only be that well known woman from Coventry.  It does bring a whole new meaning to being 'sent to Coventry', doesn't it?  Also, can I point out that when I learnt to ride a horse, I wasn't allowed one of those nice boxes to step up into the saddle.  I had to feebly jump up and down until I'd worked up enough momentum to haul myself up.  I guess that is a lot less dignified without jodhpurs on.


I notice she's side-saddle in both of these.  The Thomas statue is a 19th century vision of the maiden, voluptuous and somewhat ashamed of herself, but the Dick is post Second World War and she is a far more modern looking Miss, athletically stream-lined and looking somewhat not bothered by the whole shenanigans.  I'm riding my horse with my thrups out.  Whatevs.

Having won the argument by stripping off, Godiva seems to have trotted back and collapsed in a shame-heap into the arms of her servants, all of whom seem to be getting an eyeful.  Obviously she hadn't been entirely clear in the memo she sent out about not peaking at her while riding.  She should have added 'Also, you are not allowed a gawp while I'm falling off my horse when I get back.'

Hurrah for Godiva, a proper Victorian style heroine - she did something philanthropic but she got her boobs out at the same time so it's okay for us all to have a good old look at her and admire her virtue.  That leads me to wonder about the missing piece of the story:  the legend says that one man ignored the request to not look and he drilled a hole in his shutters so he could have a look at Godiva as she rode past.  Sadly for him, that was the last thing he saw because he was struck blind (according to some stories) or struck dead (according to some others).  That man was called Peeping Tom, from whence we get the phrase.  I had a good old troll around the internet and I couldn't find Victorian images of Tom and I wondered why because that is a fairly dramatic twist in the story.  It also reinforces the punishment of sin and all that malarkey that the Victorians would have loved.  Then I got to wondering if, in fact, we are meant to be Peeping Tom?  Certainly, images of a man being struck blind for looking at the same naked lady as we're all gawping at might give one cause to feel uncomfortable, so it explains why possibly there aren't the same levels of images of him as there are other parts of the Godiva story.  Also, we are indeed the chaps staring at Godiva's rather nice assets, so we should watch ourselves.  It is a handy way of reminding us that we are not the virtuous creatures we might imagine we are.

So, hurrah for Godiva and her firm stance on taxation.  I think in these days of austerity, we would all merrily do far worse for a chance of a bit of money back.  In fact, I found this rather fabulous poster for a modern day Godiva and her horse, who has found a novel way of raising money for 'good' causes.... 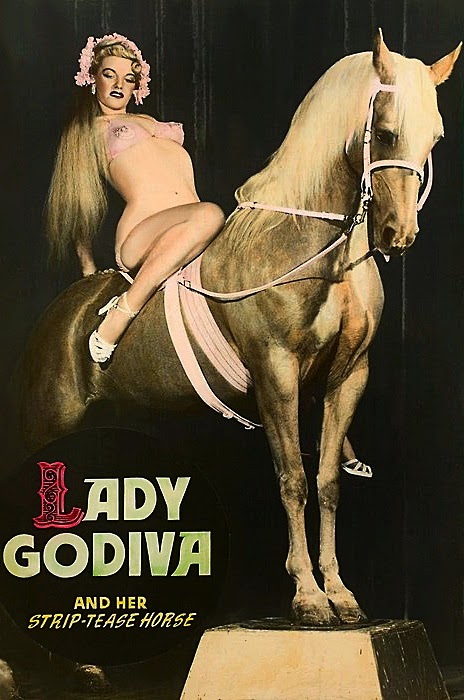 And you get to keep your shoes on! Hurrah for tax relief!
Posted by Kirsty Stonell Walker at 16:51