In a marvellous cross-website escapade, I have been 'tagged' by Kris Waldherr, author and illustrator, to talk about the main character of my novel, A Curl of Copper and Pearl.  Here we go then... 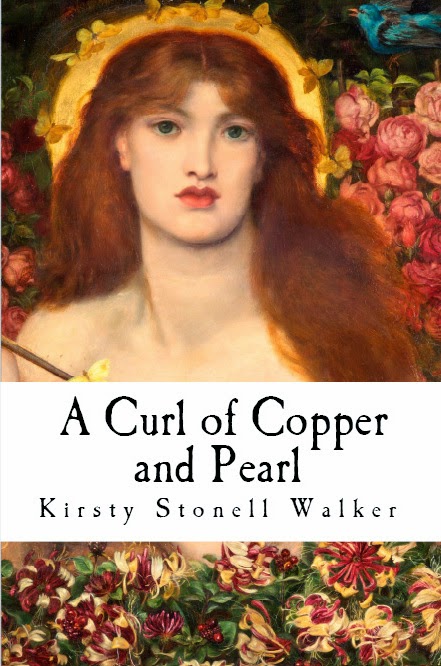 1. What is the name of your main character? Is she fictional or a historical person?

My main character is Alice 'Alexa' Wilding, Pre-Raphaelite model and Dante Gabriel Rossetti's muse from 1865 until his death.  She was definitely a real person, look!

However, I have fictionalised parts of her story as the book is not only about her life but also about the lives of those she knew.  Alexa is the means in which we observe Rossetti and the decline of his life and so some aspects of her life, such as the children she had in the 1870s were not included, in order to keep the story focused.

2. When and where is the story set?

We meet Alexa in 1865.  She lives in the Newgate area of London which was famous for meat and murderers, being home to the prison and the market.

We follow her through the 1870s, to Kelmscott in Gloucestershire and Bognor on the South coast, following Rossetti's perilous love life to which Alexa was a silent observer.  Alexa was present at some of the most tumultuous years of Rossetti's life and I wanted her to be a pair of fresh eyes, viewing the goings-on without all the baggage we now bring to the stories.

4. What is the main conflict? What messes up his/her life?

I think the main conflict is that everything in Alexa's new exciting life is given to her by the men who adore her.  She knows there is an inherent instability in her position as mistress and model and she has to learn the skills to protect her lifestyle and those she loves.  I think there is also a part of Alexa who can't move beyond her former life as a girl from the backside of St Paul's Cathedral who smells like pig meat.  However high she moves up in the world, she is still the same girl, just cleaner.

She cares for the people who she sees as saving her from her old life and she is willing to do anything to help them, even endanger her own life.  Similarly, there is very little that she won't do to maintain her position and she definitely feels a tension within herself over what she is willing to put herself through for money.

5. What is the personal goal of the character?

When we meet her, she has no idea of a goal in her life.  She wants to get through the day, through the season's sewing and go home.  She wants to marry, to move out of Warwick Lane like her friend has, but she can't see how it would be possible as she works all the time.

Her dreams grow slowly as she gets to know Rossetti and his friend George Boyce, but they start as small as cheese and the occasional bath.  She has no frame of reference for the things they start to give to her and so her dreams are usually playing catch-up to her life.

She is placed in a totally unbelievable position of having her own home, nice things, money and time to herself.  She really wants to keep hold of all of that while trying to hold onto her friends and escape her former life, especially when she is reminded by a relative exactly where she comes from.

6. Tell me about the title, what is the significance of it?

To start with, the book was called 'How She Fills His Dreams', taken from the Christina Rossetti poem about the artist's model.  For the same reason, I also considered 'One Face' because Alexa is arguably Rossetti's one face, especially from the later period of his life and art.  However, I wanted something that captured the dream-like, artistic quality of the story and so focused on the detail of her hair and skin.  I also wanted to echo the famous pearl hairclip, worn by Alexa in Monna Vanna.  I also like the fact that it rhymes within itself, something becoming beautiful or revealing its beauty.

7. When can we expect the book to be published?
It's published and available from Amazon here (UK) and here (USA)

The next author whose main characters you will meet:
Robert Stephen Parry, over at Endymion at Night, author of Virgin and the Crab, The Arrow Chest,  Wildish and upcoming novels Elizabeth and The Hours Before.
Posted by Kirsty Stonell Walker at 16:31