If you have been following my blog for a while you will know that I have a fascination with a late Victorian social set called The Souls.  Imagine my delight when I discovered this had been published... 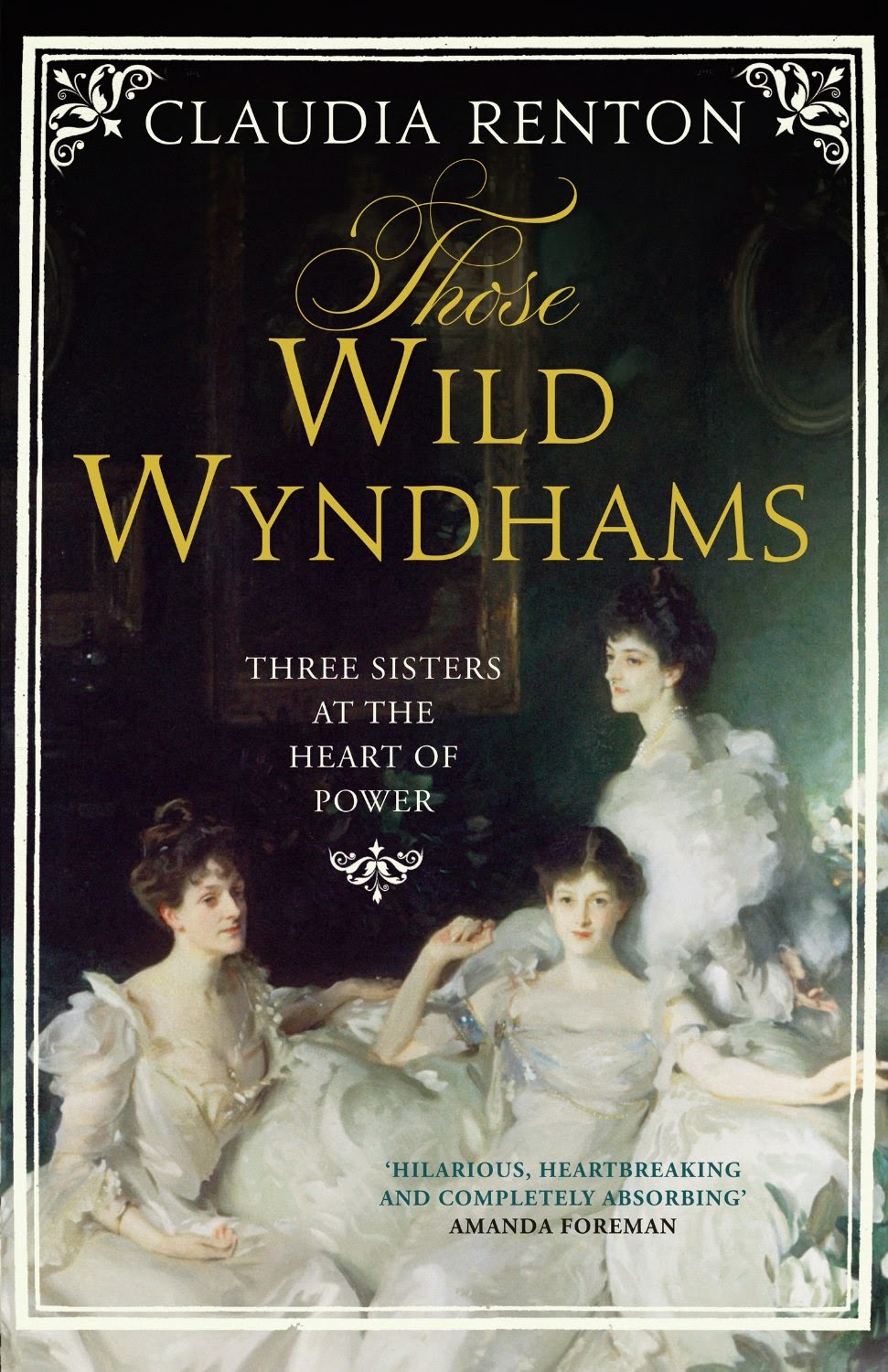 The problem I have always found when reading about The Souls is that there are so many people involved, both within the group and as satellites (or hangers-on - Wilfrid Scawen Blunt, I'm looking at you, you rat weasel).  I was curious to see how a book from a specific angle would manage the large cast of characters.  Amazingly, the Wyndham girls could be the answer as their lives touched upon all the others.

Mary, Madeline and Pamela, the Wyndham sisters, were at the heart of British society.  Born 1862 (Mary), 1869 (Madeline) and 1871 (Pamela) they moved in circles that are familiar to us.  Their homes were furnished by Morris and Co, the paintings on their walls were by Burne-Jones.  Among their close friends (and possible lovers) were Prime Ministers and Irish agitators, but their politics never seemed to be entirely the point.  They behaved impeccably in public, were well read and not prone to the excesses of the upper classes at the end of the century.  So why were they so notorious?


The book reveals a world in flux much before the First World War, which itself would impact upon the Souls to a devastating extent.  Through diaries and letters we have access to the thoughts of these three women, all educated, privileged and from the establishment.  I felt this far more with the youngest sister, Pamela, who had access to the adult world through her eldest sister.  When Pamela was barely into her teens, her sister Mary was a married woman and new mother, expressing her frustration at the separate role she was forced to take by society.  For an active, social woman, becoming a mother meant removal and Mary wanted more.  To be specific, Mary sometimes wanted Arthur Balfour...

Balfour, later the Prime Minister who hung Burne-Jones paintings in No.10, is a man of mystery.  His unmarried state was always a matter of rumour and gossip and it is widely assumed now that he was gay and/or a hamophrodite .  Mind you, he and Mary seemed to have gotten up to mischief, so make of that what you will.  He also enjoyed spanking.  The things you learn about former Prime Ministers!


Before 1886, the story is of a traditional society family and their friends, but the advent of lovely Laura Lyttelton's death, at the heart of their group, brought about a change.  The friends became insular, shunning others to spend time just talking and being together.  The impact of their loss was to drive them to become a clique, and society hated cliques.  The tragedy of 1886 brought about the most alluring and sneered at grouping of people, nicknamed The Souls in a rather disparaging remark.  It was said that all they did was sit around and discuss their souls, although Wilfrid Blunt (relative and hanger-on) said 'They read the Bible and they read the Morte d'Arthur in the same spirit.'

One of the most beguiling things about the Souls is the way that they presented themselves.  The women led the aesthetic fashion (as seen in Poynter's painting of Mary, above) and garnered both admiration and hostility for their choices.  The flowing gowns complimented the Morris and Co interiors that they chose for their homes and their choice of painters reinforced their tastes to the public.  Mary is wearing a vivid mustard dress that would not have looked out of place on Jane Morris twenty years earlier.  Her sister, Madeline, shared Jane Morris' lover, Wilfrid Scawen Blunt.  Lawks.  I'm suprised she bothered when Harry Cust was part of her social circle...Queue gratuitous picture of Harry Cust....

I found the attitude towards sex within the group to be very interesting.  Some criticism of them came from people who found their attitude to one another, between the men and the women, to be contrary and confusing - 'They were impossibly flirtatious with one another while publically advocating chastity'.  The men and women of The Souls seem to exist in a state of sexual equality to some extent, talking about serious subjects and speaking to each other with a level of eyebrow-raising informality.  At the same time they were keeping Mary and Arthur Balfour apart for fear of adultery and scandal, and were quite cautious of the notorious Harry Cust and his corset loosening ways.  It seems contradictory but possibly they knew how far they could take the flirtation amongst themselves because they all understood the rules.

I wish the story could end before we reach 1914, but of course to understand the Souls, you have to follow their children into the War.  Sadly, you don't get to follow many of them back out again.  As I have said before, I wonder if the dip in popularity of Pre-Raphaelites after the Edwardian period is because so many of its young champions died in the trenches.  This lovely young chap above (Pamela's son) died the year this was drawn, together with many of his cousins and family friends.  In one of the other Souls biographies, they have a diagram which Mr Walker and I refer to as the Wheel of Doom as it has a circular family tree of all Souls, which suddenly comes to an abrupt end.  There is a terrible pathos in the sadness of the families, echoed across the country at the same time, as they had been so self-possessed and happy. The group that emerged in 1918 was a pale echo of what it had been and their influence was lost.  It's easy to see why Pamela's son, Stephen Tennant, went so wild with his surviving generation in the 1920s.

This is a wonderful book, full of the sisters' own words from diaries and letters.  The anecdotes are wonderfully vivid and give an impression of an idyllic clique, wrapped up in each others lives and following a separate path from society.  It also gives a clear picture of three women who were outwardly model Victorian wives, yet wrestled with the same problems we have today: motherhood, love, fidelity, loss.  By centering the book on the Wyndham sisters, Renton has controlled the cast of characters and made it easy to remember who is married, who is committing adultery, who is related to Oscar Wilde's lover and who Harry Cust played naked tennis with.  I need a book about that last point, by the way.  Or a time machine.

I thoroughly recommend this book, it is a joy to read.  Buy it from Amazon here (UK) or here (USA) or at your local bookseller.
Posted by Kirsty Stonell Walker at 18:05