I studied a lot of poetry as a young 'un, but it is to my eternal sadness that I never got to study Christina Rossetti.  I have a suspicion that Victorian verse was seen as unfashionable when I was at school, so I did all manner of modern poems instead and had to wait until I was in my 20s before I read Goblin Market.


Now, when I first read the poem it was presented to me as being highly sexualised and possibly evidence that Rossetti was a lesbian.  Good heavens.  In its time, it has been interpreted as being about temptation, addiction, sex, death and religion and possibly even goblins.  Rossetti regarded it as a poem for children, but then if she had just written a text about the joys of lesbian relationships she was hardly likely to write that in the forward.  So what is it about?  Who knows, but is there a clue to be found in her brother's contemporary illustrations? 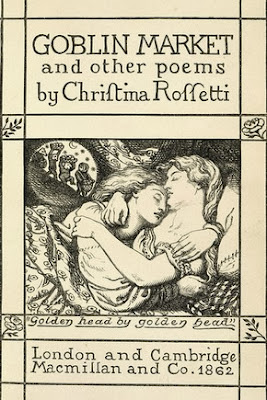 Christina wrote the poem in April 1859 and it was finally published in a collection published by Macmillan and Co in 1862.  When it was published, two of its most defining illustrations appeared with it by the poet's brother, Dante Gabriel Rossetti.  A number of Christina's poems seem to be interpreted as being biographical of her brother Gabriel, including 'In an Artist's Studio', but 'Goblin Market' seems to have special significance.  Time and again I have read how the poem is about addiction and most notably the spiral of addiction of her sister-in-law, Lizzie Siddal.

It doesn't help or harm that the figure of one of the sisters seems to resemble Elizabeth Siddal when interpreted by Rossetti and (if I read his illustration correctly) the sister on the left, the weaker sister who succumbs to the Goblin fruit, is the one who looks like Elizabeth the most (although they look fairly similar). Mind you, inconveniently Christina called the errant sister 'Laura' and the stronger sister 'Lizzie'.  The use of the name is why I think people are so eager to read the 'addiction' interpretation into Goblin Market, but it is the least compelling explanation of the poem I have heard.  If you want a compelling metaphor for addiction in literature, Gollum in The Lord of the Rings is far better.  I'm not convinced that Christina would have felt strongly enough about the plight of addicts to write it as a damning indictment of addictions, however close to home.

How about lesbianism then?

It's a very popular reading of 'Goblin Market' to say that it is about the rejection of male society (as presented by the Goblins and their poisonous fruit).  The paragraph most quoted in this argument is when Lizzie returns to her sister covered in the fruit to cure Laura:

“Did you miss me?
Come and kiss me.
Never mind my bruises,
Hug me, kiss me, suck my juices
Squeez’d from goblin fruits for you,
Goblin pulp and goblin dew.
Eat me, drink me, love me;"

I find it interesting that Gabriel Rossetti did not chose this moment for illustration as it is the one of the most dramatic and shows the salvation of one sister by the other after an act of bravery.

The above illustration came from, believe it or not, Playboy when they featured the poem and concentrated on the more, shall we say, sexual aspects of the text.  Those Goblin Fruit look a bit suspect if you ask me, and the Goblin Men are a little more insistent than I imagined, but Craft shows the pivotal moment of bravery on the part of Lizzie.  The moment of Lizzie's humiliation by the men which she survives triumphant is described in the most terrible detail and shows the Goblin Men in their true, animalistic, evil light.  Craft shows this as a metaphoric rape, but I think Christina Rossetti intended something more spiritual in the reading.

Her brother chose the earlier encounter by Laura with the Men, when their countenances were more pleasing: 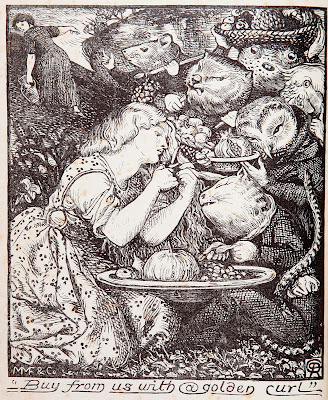 Looking like slightly unsettling extras from Wind in the Willow, the Goblin Men 'smile' at Laura as she hacks off her hair to get a taste of the fruit.  I don't think it is a coincidence that at the time he was drawing these illustrations, Rossetti was also working on religious pictures like The Parable of the Vineyard.


It is easy to see the figure of Lizzie as Christ as she offers salvation to her sister via her own suffering. Because of the sins of her sister, Lizzie has to suffer humiliations that include being crowned with the fruit that runs into her eyes like blood.  She then vanishes from them and reappears (it's tempting to say three days later) to her sister.  The sinful fruit that tasted good tastes foul to her when placed in the context of suffering and she is cured of her hunger for it.  Lizzie is offered up as a sacrifice, then as communion.  As Christina wrote the poem in April of 1859, around Easter, it's tempting to read this in the subtext of the fairytale.


I think where the subversion comes is that Christina Rossetti, a religious writer, envisages Jesus as a woman, as her sister:

In calm or stormy weather;
To cheer one on the tedious way,
To fetch one if one goes astray,
To lift one if one totters down,
To strengthen whilst one stands.”


The description of Lizzie is very messianic in the traditional Christian sense: 'white and golden', 'a lily in a flood', 'a rock', 'a fire', as she approaches the Goblin Men for her moment of sacrifice.


I've always thought Golden Head by Golden Head to be less sensual and more protective, the idea that someone will watch for us and be with us always.  In her description of the pair it is almost as if Christina is describing a mirror image: 'Like two blossoms on one stem', 'Like two wands of ivory' and 'Cheek to cheek and breast to breast'.  I wonder if Christina was hinting that Laura and Lizzie are essential two sides of the same person, one of whom is weak in the face of dangerous temptation and one who is Divine.  Laura reflects Eve, warned not to eat the fruit yet still too weak to say no, in fact actively seeks out that forbidden deliciousness.  Lizzie is God, Jesus, the saviour, our eternally better self.  Her brother reflected this duality in his mirror-image sisters, a precursor to his reflection-images of Jane and May Morris in his works of the 1870s.  The sisters are both human and Divine which is a bold claim.  It is usual for woman to be seen as the weaker party, so the character of Laura plays to the trope of the weaker sex, but her twin-self is the crusading strength with not a flinch at her suffering.  The elegant subversion of the traditional Christian message of a male protector hidden within a fairytale for children is what makes Christina Rossetti a dangerous and exciting poet.


No wonder they didn't teach her to children...
Posted by Kirsty Stonell Walker at 20:45