The White Fairy Sees All! Magic and Mind-Reading Part 2

Not to be too sensational about things but there is a mind-reading fairy living in my house.  Not a Cottingley Fairy (t'uh, big fakers) but a real, proper, actual fairy.  Who can read your mind.  Honest. Look... 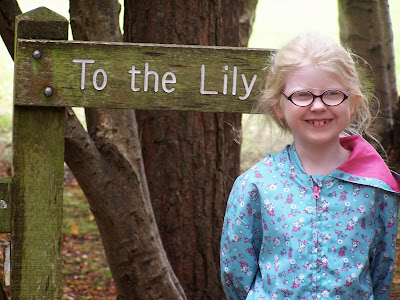 Okay, so she doesn't look that impressive in a pack-a-mac but if this was 1850 we'd make a fortune.  What a horrible thought.  For those of you who don't know, the above fairy is my daughter Lily-Rose and she has ocular-cutaneous albinism, or put simply she is a girl with a lack of pigment in her skin, hair and eyes.  For the Victorians that would be enough to condemn and revere her.  What's that all about?

I've wanted to do this post for a while as the subject is obviously very dear to my heart.  Here comes the science bit to start with:  as a genetic condition, each parent has to pass on half of an albinism-related gene so you have a one in four chance of inheriting both parts from your parents.  Even if you get both bits, albinism itself is quite a wide spectrum.  Lily-Rose is somewhere in the middle: she has very little pigment in her skin and hair, her eyes are blue and her eyesight is atrocious.  However, she is in a mainstream school, in a 'normal' class and she is doing very well.  When she was diagnosed at 10 weeks the various prognosis we were given for her ranged from 'she'll be just like everyone else, just blonder' to 'she's blind, possibly deaf, won't talk, might not walk, possibly retarded (actual word used, many thanks to that specialist)'.  If you think that's bad we were also told one other thing: She's unlucky.

Ponder that, my friends.  The person who said that didn't mean that Lily was unlucky to have inherited albinism, they meant she was the bringer of misfortune.  Because Albinos and Dwarves are unlucky.  You heard me right.

Now I had never heard that particular belief before and so would be fascinated to hear if anyone else had come across it as I believe it stems from a particular area of the country.  After picking myself off the floor and checking the calendar to make sure we were still in the twenty-first century I decided I wanted to find out more about the cultural beliefs surrounding albinism.  Enter Miss Millie Lamar... 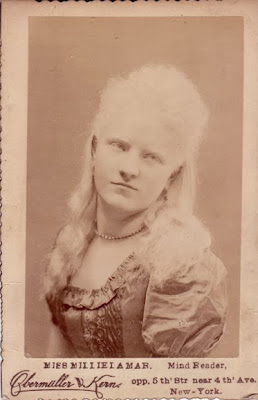 Oh Miss Millie Lamar, you genius.  In a time when being different was definitely hazardous to your health, many men, women and children with albinism found relative safety and employment in circuses and freak shows.  Millie established herself as a mind reader and found great success and I'm guessing an aid in fooling people was working on their prejudice. And she wasn't the only one... 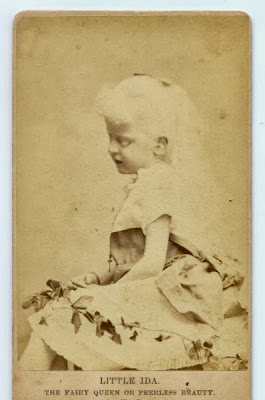 Little Ida, the Fairy Queen of Peerless Beauty.  Well, that's quite a mouthful and quite a claim.  Mind you, an adjective that has been applied to Lily on more occasions than she's had hot dinners is 'fairy'.  It's not only her appearance that causes this but also the tendency for children with albinism to play on their own due to difficulties in recognising their friends in a busy playground.  She also has difficulty with judging personal space as she often doesn't realise how close she is to people she is talking to and often doesn't look at people's faces when they talk to her or she replies. She cannot see them clearly so turns her head to hear them better.  None of that is 'normal' apparently.  It's 'quirky', which is currently our favourite euphemism for 'your child is weird, do something about that please'.  To her kinder teachers, it was something fascinating, something charming, something magical.  As a parent, I much preferred to hear my daughter was magic, but neither speak of any great understanding of Lily's 'disability' (I don't think albinism is a disability in itself, but her eyesight definitely is and has a knock on effect in her behaviour and habits).  To Victorian audience, that 'magic' was worth an entrance fee.  Best not tell Lily's school that.

Little Ida and Millie made the best of the hand genetics gave them, at least for a while, but what of other Victorians with albinism?  What did texts of the day say about the fairest among them?

I knew that Moby Dick was 'the white whale' but I hadn't realised the connection with albinism and the amount of symbolism and prejudice in the novel.  Based partly on the killing of an albino sperm whale in the 1830s named 'Mocha Dick', the whale in Moby Dick is described as actively malevolent and this is linked to his albinism, a common theme which I'll come to in a bit.  Many passages talk about the horror of his appearance in such ways as this: 'What is it that in the Albino man so peculiarly repels and often shocks the eye..?'  The 'wrongness' of albinism is alluded to repeatedly, how albinos must be as different inside as they are outside.  Possibly Moby Dick is the birth of the 'evil albino' myth, so prevalent in books and movies today.  The Da Vinci Code, Cold Mountain, The Matrix, even the damn peacock in Kung Fu Panda 2, it is lazy shorthand for evil. 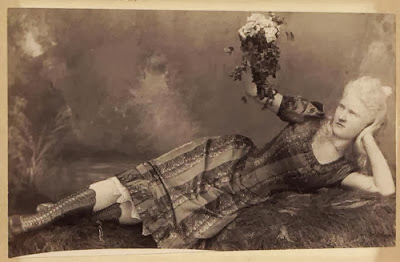 Mind you, in nineteenth century society, evil wasn't the prevalent prejudice.  Summed up by Karl Pearson in his early twentieth century works on heredity and eugenics, 'albinism is very often associated with lowered physique and lessened mentality.'  Charming.  While one rare strain of albinism does have a health implication, ocular and ocular cutaneous albinism has no impact on physical development or health at all.  More puzzling was the claim that albinism was a strictly men-only club.  European albinos were always male as the female siblings of albinos were 'destitute of the Albino degeneracy...' Again, charming.

I wonder if the apparent belief that albinism was a male condition is why women with it were fetishized and the mythology grew up around them.  If you consider that the average response to the physical appearance of those with albinism is reflected in The Art of Preserving the Hair on Philosophical Principles (1825) : 'The whiteness of the skin is not the clear and glossy tint of the uncoloured parts of the European frame in the healthy state, but of a dead or pallid cast, something like that of leprous scales.' Once more, charming.  It's astonishing how that contrasts with the fascination with the appearance of women with albinism, possibly because in general belief they shouldn't exist.  Maybe that's where the magical element comes in... 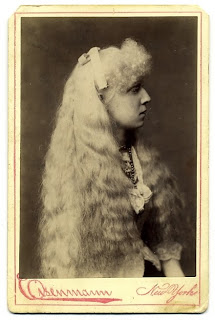 Little Ida is described here as 'the beautiful Albino', completely at odds with the apparent revulsion felt about the condition.  In many of the images of women with albinism their hair is loose and a feature of the portrait, like our lady on the right.  Mind you, Lily-Rose has a fairly spectacular head of hair and causes a stir when she is out and about.  I have had women accuse me of dying her hair (that was a very aggresive encounter) and as neither me or Mr Walker have blonde hair, a kind old lady in a supermaket informed Mr Walker that his daughter obviously wasn't his.  People randomly stroke her hair, mostly in lifts, and the only place where we passed unnoticed was Stockholm where everyone is blonde and so no-one felt the need to comment on how blonde Lily was.


The Lacasie family was 'acquired' by P T Barnum during a visit to Amsterdam in 1857 and became a feature of his travelling circus.  While it can assumed that Rudolph Lacasie actually did something entertaining (judging by the costume) I suspect people just came to see them and their genetic difference.  If that sounds weird to us with our modern sensibilities then bare in mind while looking for the historical images for this blog I found many webpages devoted to the 'wonderful weirdness of albinos'.  They were very nice sites, saying how beautiful people with albinism are, but all the same they are concentrating on how different they are.  Do you think that is a good thing?  I really don't know.

I think the point of this post is to question if our manner of seeing things has really changed since Victorian times.  We are now more aware of the offense idiotic notions of 'difference' can cause and hopefully we have made progress in accepting and ignoring difference where it just doesn't matter, but there remains something primal in our fear and fascination with 'Other'.  Like with the witch, when we celebrate and embrace the cunning woman is it the innocent victim of hysteria we celebrate or the fictional stereotype of a misogynistic society?  Neither seems worth splashing out on stripey tights for.  Likewise, a lack of pigment in eyes, skin and hair seemed enough to make you magic in the olden days.  How ridiculous.  Still in certain areas of the world it is enough to get you killed for your valuable magical body parts because you are a 'ghost', not human at all.  How terrifying.

Lily knows she has albinism and has a vague idea of how it makes her different, physically.  Only time will tell what she will make of all the other nonsense that seems to go along with it.  Mind you, judging from the photograph above I think Lily-Rose has bigger problems than some absent pigment.  She has us as parents.  Lawks.

Posted by Kirsty Stonell Walker at 11:06