Review : The Arts and Crafts Movement in Scotland

You will know I have great pleasure in reviewing books.  Apart from the obvious perk (I get free books), I also get to see some utterly astonishing publications and bring them to your attention.  Sometimes I get to see such things that defy description because they are a catalogue of such beauty.  This is one such example.

I say it defies description, but I’ll obviously have a go.  Ladies and Gentlemen, this is The Arts and Craft Movement in Scotland by Annette Carruthers. 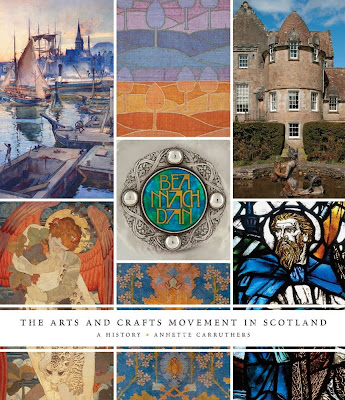 The sharp eyed among you will notice I have a bit of a Scottish name.  I was named for my great-grandmother whose family was from Glasgow and that side of my family was always proud of its Scottish ancestry (we have a ‘proper’ tartan and everything.  It’s predictably red).  Mind you, I’ve heard enough stern talk on cultural misappropriation this week (ah, Halloween, you complicated holiday) and so would never dream of expressing views on Scottish Independence or anything like that and promise never to wear a kilt.  I will however gladly say that this is one of the most glorious books I have ever had the pleasure to read.  It’s an expensive book certainly (£60 preorder on Amazon) but you get your money’s worth of colour illustrations and brilliant, accessible text.

It’s sometimes tempting to think that the Arts and Crafts Movement did not get any further north than Cheltenham, but that patently isn't true.  With its roots in the 1860s, Scottish Arts and Crafts rose to its zenith from 1890 and continued on until the First World War.  It seems that the country got behind the ethos, with the art school promoting the approach and the Scottish Home Industries Association trying to revive traditional rural crafts.  If all you know of ‘Arts and Crafty-ness’ in Scotland is Rennie Mackintosh, then this is definitely the book for you.  I have to admit to now being utterly in love with Phoebe Traquair.

Oh Phoebe, you must be the most accomplished artists who I've never heard of.  An Irish artist who moved to Scotland after her marriage to Dr Ramsay Traquair, Keeper of Natural History at the Edinburgh Museum of Science and Art (now the National Museum).  A champion of the ‘career break’, Traquair returned to her craft after raising their children and gained a reputation as an embroiderer, jeweller and muralist.  She painted celebrated murals in churches, including this in the Catholic Apostolic Church in Edinburgh… 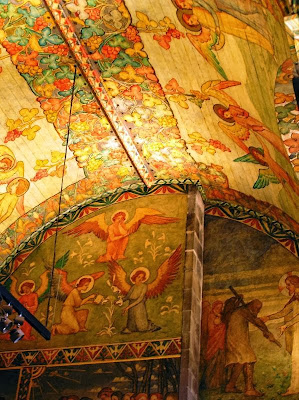 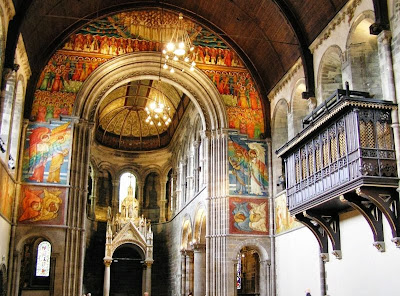 It’s easy to see why this building (now known as Mansfield Traquair Centre) has the nickname ‘Edinburgh’s Sistine Chapel’.

Influenced by the Pre-Raphaelites, William Blake and her travels in Italy, Traquair's work is astonishing and this book is the perfect medium to see it if you cannot visit the works themselves. Listed in the book is a church local to me that has some of her work which now goes on my list for a visit.

Traquair’s enamel work is amazing to behold.  She not only made small plaques in the medium for jewelry and caskets, but also created whole works, such as this casket.

Wowser.  Traquair was the first well-known female artist working in Scotland and the first woman to be made a member of the Royal Scottish Academy.  Her son, Ramsay Traquair, became an architect, which seems to sum up a theme in the book about how the arts were all connected,  how one reflected in the other with perfect symmetry which we just don’t seem to manage anymore.

If learning about the Scottish artists is not enough, you also see what works by familiar artists had influence north of the border.  There are beautiful illustrations of Burne-Jones' stained glass from Kirkcaldy, Morris and Co glass from Dundee and William Morris tapestry made in Ayrshire.  What the book has left with me is that the development of what we see as 'The Arts and Craft Movement' is far more widespread and organic (no pun intended) than is usually thought.  In some ways it's a celebration of what is everywhere, the craft of everyday people.  In the hands of artists such as Phoebe Traquair the everyday becomes divine and that is why Arts and Crafts objects, from the smallest locket to entire buildings, are so eternally beguiling.

The book is out at the end of the month and is available from all good bookshops and online.


Posted by Kirsty Stonell Walker at 16:34