This week my husband discovered I had an otherwise hidden talent which impressed him greatly.  Now before you start sniggering I should explain.  I can catch butterflies in my hands without harming them.  I admit it’s not exactly something for the cv, but it was a talent developed in childhood and called into action this week when a red admiral blundered into our front room.  Before our dog had a chance to leap into the air and eat it (they taste like colours apparently) I caught it in one hand in mid-air and escorted it safely from the premises. My husband was the most impressed I’ve seen him for years.  This all led me to consider the part our little winged friends play in Victorian art… 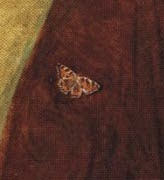 The first picture I thought of was obviously The Blind Girl by Millais but I have to admit it took me ages to get my brain to back up from concentrating on that precious little butterfly on the girl’s shawl.  It is a thing of beauty indeed and everything about the beauty of nature is summed up in that small tortoiseshell.  It is an interesting addition to the picture which already contains a stunning spectacle of nature, the double rainbow, but I wonder if it is about the unutterable scale of the wonder missed by the girl who cannot see?  Maybe to Millais, obviously a visual person, loss of sight is a tragedy of epic proportion and he expresses that by showing the spectrum of wonders.  The girl can experience things by touch but it is unclear from the image how far Millais feels that would compensate.  The clarity of his vision, the joyous spectacle of every inch of his canvas seems to me to be a declaration of his love of image.

Okay, so this is cheating a bit, but I love a death's head hawk moth.  Really, I would be easily seduced by a shepherd with a moth.  They are astonishing in real life and I have been lucky enough to encounter many a hawk moth in my time.  I especially love elephant hawk moths, they are so endearing.  This moth obvious has deathly connotations, it is a warning, a momento mori, how negligence will lead to corruption, but I’d be too busy looking at the moth.  This is why I shouldn't be left in charge of sheep.

My father, the beekeeper, has a love of insect-kind which probably coloured my childhood.  I remember one encounter with a moth which will scar me for life.  Dad left what he thought was an empty chrysalis on the kitchen shelf only for it to hatch and secret itself under the sofa.  When I went to fetch my shoes I found myself right up against an Atlas moth.  We had to trap it under a washing basket until Dad came home from work so it wouldn’t hurt itself.  Google it, it’s enormous.

My Dad also used to stuff dead birds that flew into our bay windows.  He’d put them in our freezer until he was ready to stuff them.  One day I went to get an ice lolly and pulled out a blackbird.  Moving on swiftly…

Another famous array of butterflies are the ones that flit around Venus’ head in this famous oil by Rossetti.  The butterflies here speak of temporary glory, something utterly astonishing but gone in a blink of an eye.  I wonder if that is a reflection on how we perceive a butterfly?  One moment the wings are open and we see all the majesty of their colours, a perfection of nature, then the wings close and they are gone.  Isn't it strange that the wings are only decorated on the ‘inside’?  There must be a perfectly sensible reason for that, something about warning/display and camouflage.  I like to think that the fairies only have time to paint one side.  Oh, talking of fairies…

Nude-y butterfly ahoy!  In various Victorian paintings butteries were fairies in disguise.  Well, I say 'disguise', I mean 'nudey splendor'.  The Victorian fairy painting genre has a delicate blending of the figure of a fairy and the rich painted wings of butterflies, as in Falero's cutie above.

There definitely seems to be a relationship between the two, possibly the fairies use butterflies as cover for their nudey scampering around the garden.  Well, really!  There is a magic to butterflies (and some of the brighter patterned moths) that seems to be unlike other creatures, as if they are a little piece of magic in our hum-drum worlds.

Much like myself and my butterfly-catching antics, there is a relationship in art between little girls and butterflies that needs examining.  It could be a comment on the fleeting nature of youth, but then why are there not more boys in the images?  Maybe there is a connection between the temporary life of the insect and the innocence of girls, as if it is a comment on how glorious and beautiful a woman in innocence is.  There is something very special about where the butterflies land - they aren't just fluttering past, they are choosing to settle on these 'flowers' of womanhood before it all goes downhill.  Not that I'm bitter or anything.

It's not just little girls who get the butterflies, but it does seem to be young virgins, skipping through the spring of their lives, wearing frankly ludicrous hats (Frampton, what were you thinking?).  You see, if you don't have anything to do with beastly men you remain as fresh as a daisy and attract insects.  I think we can all learn a lesson from that.

De Morgan's butterfly looks more serious than the flighty little wisps of fun-shine we have seen so far, and there seems to be something rather serious going on.  The pastel maiden is down on the rocky landscape as a dark-winged figure seemingly falls towards her.  Is the butterfly about to be squashed to death by some woman who insists on flying with her eyes shut?  Is the winged figure hurtling at the rainbow-touting girl-sect Time, about to crush her with the horror of not being young and pretty anymore?  The horror.

I feel a very feminine commentary to the role of butterflies in paintings.  There is a split feeling that they are silly and shallow and so very, very temporary but oh, the glory of those wings!  The butterfly is something to be utterly adored above all other things because it is so fleeting, gone in moments but then where does that leave women?  The butterfly seems inexorably linked to young womanhood, those precious moments before all is spoiled by time, child birth, knowledge, having thoughts of your own.  You know, all the bad stuff.  If only women were more like butterflies then the world would be a happier place.

Well, for the lepidopterist it would be.  Some of us are starting to get a bit chilly...
Posted by Kirsty Stonell Walker at 15:45