Having the Crime of your Life...

For quite a while now I have been tracing my family history.  There should be a warning on the website before you start saying:


'Look, you probably won't like some of what you find out.
We're not judging you, just be aware that people in the past were messed up.
Not you, you're lovely. Well done.'

So far I've found married cousins (small village, was it?), hilarious surnames (Cocking-Champion.  No really) and other very complicated shenanigans.  Oh, and some lace makers.  I was somewhat surprised to find out that Great Great Grandmother's family was a little bit criminal.  My 4th Great Grand Uncles Solomon and Simeon Parslow were both convicted of crimes and transported to Australia for 7 years.  Solomon was done for sheep stealing and Simeon was convicted for larceny and receiving stolen goods.  In their defence, once they came back they never broke the law again.  Or at least, they never got caught.

All this got me thinking about criminals in Victorian times.  Oh, and this...

Naughty Daniel Lohill was convicted of stealing ferrets and a fur necklet.  He was also found guilty of stealing my heart, the scamp!  Shame on me.

Moving on swiftly, I wondered what images of criminals were around in Victorian art.

If you study Victorian art or society, you will no doubt see this picture a great deal.  Frith provided archetypal panoramas of Victorian society and this is no exception.  We have no notion of what the shifty looking chap has done, but he is respectably dressed.  I wonder if the Victorians had a fear that the criminal class could pass among them unnoticed, looking all middle-class and everything.  Things were much easier in the past; you could spot a criminal - he was the one of the horse with the mask and the pistols...

I was surprised at how glamorous a lot of crime appeared in paintings.  You'd think it was a modern problem, making the terrible situations of criminal activity look all cool, but actually the Victorians found a sort of nasty attraction to things they really shouldn't.

Prostitution must be the most well known and 'studied' (ahem!) aspect of Victorian crime because it is so double-sided.  On one side you get images like Found Drowned by G F Watts, Found by D G Rossetti and Thomas Hood's Bridge of Sighs, where the picture is miserable, punishing and bleak.  Prostitution was regarded as possibly the most unforgivable crime, something utterly abhorrent.  In the same breath, prostitutes were known to do well, to make something of their lives.  Some 'ruined women' did rather well for themselves, as highlighted in Thomas Hardy's poem The Ruined Maid.  Maybe the Victorian's needed to be reassured that their criminals were grubby and awful...

Wow.  That is a disturbing undergrowth lurker.  He is obviously is waiting to do you some sort of appalling misdeed.  Moving on.

It's good to know that if you are an Undergrowth-Lurker, a nice soldier will come and take you away before you startle the ladies and bespoil the ferrets.

At first glimpse, this is a lovely image of a poacher and his cute daughter after a hard night of nabbing wildlife.  However, the daughter places a comforting hand on her father's leg as the door begins to open.  Uh-oh, it's the police...

Once you were in prison, things looked very bleak and rightly so.  Much is said about conditions in prisons even now, but the picture of Victorian incarceration is one of suffering and punishment in a very literal sense.   These women look on at the prisoner with despair.  They are without support, possibly for a long time and prison was most likely to return their loved one to them much altered.

It's unsurprising that the Victorian's felt the need to get retribution not just justice.  The balance between humanity and revenge was an uneasy one, and may explain why they preferred to think of Prostitutes killing themselves rather than pass through any sort of judicial system.  It's interesting to notice, when you watch as much murder mystery as I do on telly, how often the murder meets a sticky end rather than simply go to prison.  I wonder if we have never quite lost the sense of an eye for an eye.

So, poor old sheep-stealing Uncles Simeon and Solomon were sent off to Australia for seven years.  They were both in their late 30s when they went so were husbands and fathers.  It's not just the men who were punished; arguably the wives and children were greater victims of the sentence their men received.  Simeon and Solomon were lucky.  They returned and lived fairly long lives with their wives and children and never were in trouble again.  I wonder how true that was for the others who were transported or made their way through the punishing justice system here at home?  In pictures of the wives who were left behind, they are often pictured in black as if 'widowed' by their husband's crime and punishment.  I'm guessing that often was literally true.

Interestingly, there are many pictures that make crime cute.  I present Exhibit A:

The number of child criminals seems disproportionate and extremely worrying.  Was no apple safe?!

We all know that today's cute apple-pincher is tomorrow's hedge-lurker.  It's all childish-pranks now but he'll be off to Australia before you know it.  It's interesting to think of the dual nature of our relationship with the Antipodes in the Victorian period.  While my Uncles were doing time down under, the Pre-Raphaelite sculptor Thomas Woolner was off to Oz to seek new opportunities.

I think the most worrying trend in the Victorian period was animal criminals.  Seriously, it was like an epidemic...

Petty Larceny?  My Uncle got transported for that!  What does this dog get?  A humorous portrait.  Justice? I think not.  Possibly the greatest travesty is this:  last year Liberty celebrated an image of animal theft all over a pair of Doc Martens.  Disgusting.

Just because you portray it in a clever repeating pattern, it still boils down to theft.  It's even in the title!  Shocking.

I will leave you with this image of a love token made by a man transported to Australia.  The question of appropriate punishment will always bother us because it touches on a break in faith between people.  As a non-criminal, we often feel vengeful and righteous, but that does not take into account why people commit crimes and what the impact of their choice has on their families. 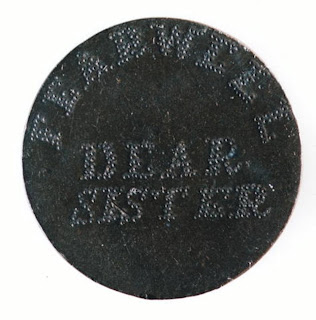 See you at the end of the week, and keep away from hedges.  You never know if a lurker is in there....
Posted by Kirsty Stonell Walker at 13:40