If you are not in these fair isles, you may be forgiven for thinking we've all gone bonkers again, but there is flippin' art everywhere!  Literally.  Art.  Everywhere.  All thanks to, well, Art Everywhere.  I know, I know, the clue is in the title....

The idea was that over this summer, the streets of Britain would become a giant art gallery, displaying the nations favourite images from national collections.  After a fund-raising period, the marvellous folk at Art Everywhere gave the nation a week (24-30 June) to select their favourites and the top 57 of these were made into billboard-sized posters.  Now, between 12-26 August, enough advertising hoarding space has been purchased to put on a show to a projected 90% of the UK population!  Wowzer...

Thousands of people donated money and a final list was selected after the voting (which can be seen here).  You will be unsurprised to learn that the top two images were The Lady of Shalott and Ophelia, a fact that seemed to puzzle and disgust Journalists (much to the amusement of people like me).  This poor soul, writing in the Independent thinks we should all be ashamed of ourselves (unless any of you are 14 year old girls) for liking Pre-Raphaelites.  Yes, shame on us all.

Now comes your bit.  If you look on the Art Everywhere site you will see they have a map, but I think it would be jolly if you post here if you see one, especially one of the Victorian ones, telling us where it is so we can rush and have a good look if we're near by.  I'll start.... 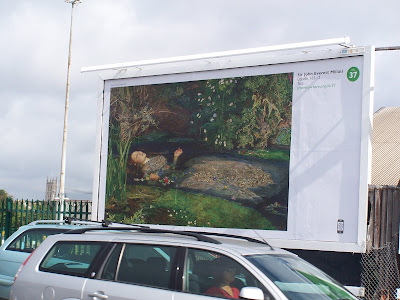 I saw Ophelia!  Opposite Lidl and the second-hand car dealer in Portsmouth!  I did a lot of excited squealing.  She's just down from Fratton station, if you are in the vacinity.  I have heard rumours that The Fairy Feller's Master-Stroke is on the King's Road, also in Portsmouth.  So that's two.  What have you seen?

If you want to get all fancy and interactive you can download a gizmo from the Art Everywhere site that tells you more about the pictures you see.  You can also comment on Twitter using #arteverywhere.

I promise I won't be out with a kettle and a fish-slice on 26th August attempting to steal Ophelia...
Posted by Kirsty Stonell Walker at 14:45