Ah, Egypt.  When I was a child my favourite Astrix book was Astrix and Cleopatra and I watched Death on the Nile a couple of hours before my wedding and while I was in labour (separate days, may I just add).  Funny then I never paused to consider the relationship between Victorian art and the wonders of Egypt...

I'm sure I'm not alone, but I always thought the fascination with Egypt was a Art Deco phenomenon.  The opening of Tutankhamun's tomb and subsequent craze for Egyptian design in the 1920s was as far as I thought, but obviously, once you start studying the Victorians, it's hard not to see the influence.  On my trip to Highgate, the Egyptian area is utterly stunning and completely mad, bursting out of the ground in the middle of such a classical and stately graveyard...

Artists of the mid-Nineteenth century visited Egypt to marvel at the landscape and scenery.  Thomas Seddon died out there in 1856, Richard  Dadd went mad there in 1843 and in the mid 1850s, the best-traveled Pre-Raphaelite went there to take in the sights...

In the early stages of his tour of the Middle East, in search of truth for his ancient scenes, Holman Hunt went through Egypt in 1854.  Afterglow in Egypt or the preparatory sketch The Abundance of Egypt (same image) was drawn in Giza and shows a fellah girl carrying the goods of her country.  Thinking on the subject, Hunt used Egypt regularly in his art of this period and continued to be inspired by the North Africa/Middle Eastern aesthetic, filled with colour and pattern.

I have begun with Hunt because I think he showed the most respect to the subject and people while embroiling them in his vision.  Look at the lantern in the above image, then think on Jesus' lovely lantern in The Light of the World.  The decorative art of Egypt obviously stayed with Hunt far beyond his visit, as shown in the use of the beautiful chair in Dolce Far Niente...

The above Ancient Egyptian stool was copied by Liberty & Co in their late 19th century 'Thebes' stool... 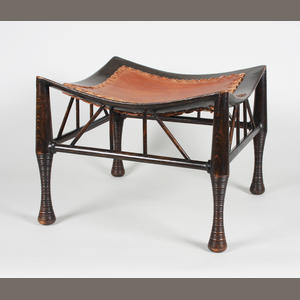 One of the main reasons for the influx of Egyptian influence and style on the Victorians was the ruler of Egypt between 1805 and 1848, Muhammad Ali.  He wished to modernise the country, and win favour and build relations with European powers, who were no doubt more than happy to take advantage.  He seemed not to hold the ancient artifacts of his country in any great esteem (or at least that is what we tell ourselves) and gave them away as gifts.  It is true that Muhammad Ali proposed demolishing the Giza pyramids to provide stone for the Nile dams.  The ruler that followed him seemed to hold the same views, as Florence Nightingale wrote of the destruction of a tomb in Upper Egypt in 1850 to make a sugar factory for the ruler's son.  Such rather cavalier attitude to history gave those that needed it a reason to go in to 'save' artifacts and bring them back to Britain, flooding the country with images, stories and objects that spoke of a foreign culture, ancient, glamorous and unknown.  The Victorians fell in love with their very own Egypt, and she was beautiful...

Hunt is a bit unusual in that he occasionally shows an Egyptian man, otherwise you may be forgiven for thinking that only beautiful dusky maidens lived in Egypt, who all owned their own pots. And very little else.

It's one of those awkward moments when you really should say to her 'You do know you can see straight through that frock, don't you?' but she's already out of her house and you'd only embarrass her.  Mind you, who knows, may be that's the way ladies of Egypt dress.  Who am I to judge?

See, it's obviously very warm in Egypt and so there is no reason why you shouldn't trolley about in something  diaphanous, if not actually with your lovely Egyptian bosoms out.  I know that feeding the chickens can be hard work and I only have the two so feeding a bevy of sacred ibis must be an extremely sweaty business.  It's a good job no-one was watching her.

Come on now, which of us hasn't strummed on a banjo and had a boob pop out.  See, it's a problem of antiquity and nothing to do with six glasses of Dubonnet and lemonade.  This is possibly the first instance of wardrobe malfunction recorded in antiquity.  Serious business, this Egyptology.  Actually, the term 'Egyptology' only came into use in 1859 and was not in common usage until the 1870s.  Before then, if you wished to look closer into the matters of Egyptian lovelies with their bristols out, you would have to call yourself an Orientalist or Egyptologue.  I like 'Egyptologue'.  Say it out loud, isn't it lovely? If you raise an eyebrow on the 'logue' part, I think it strikes the right tone.

Now them, my Egyptologues, how educational is the above image?  Don't be concerned by the amount of nude lady-flesh on display, it's fine because it's ancient.  Really, it's a proper study of life in historic Egypt.  I think it must be looked at for a long time so you learn a great deal.  Possibly in a room on your own so you're not disturbed.  Moving on.

It must have been difficult not to pause and sneer at the Ancient Egyptians, in the way that we in the 'most civilised' times and countries always look down on previous civilisations with amused affection, as if looking at a child doing something quite clever but nonsensical.  Look at all those funny Gods!  Look at the way they believed they needed things to be taken with them into the afterlife!  Ancient Egyptians are funny!  Much of the gawping at nude Egyptian lovelies comes from the belief that for all their architectural advancements and style, secretly the Egyptians were nothing more than savages, so it was fine to picture the women in their 'natural state'.

If only they had had a Queen, a glorious, beautiful Queen, who also wasn't averse to a bit of nudity...

See you tomorrow.
Posted by Kirsty Stonell Walker at 12:31