The Golden Stairs Shine With Tears

I want to clear one thing up right now: I do not, repeat do not own a time machine and further more, I do not travel back in time and ensure that all Stunners lead miserable, short, disaster-ridden lives.  I live in hope of one day finding a model who lives a long, happy life, filled with a loving husband and no disease or anything.

Today is not that day.

I am slightly obsessed by this picture as so many people are listed as possible models for the descending girls.  Laura Tennant, Frances Graham, May Morris, Margaret Burne-Jones and on and on, I fully expect to read one day that I am supposed to be one of the women (I'm the one with the tambourine).  A name I had not looked into before was Edith Chester.  Like a fool, I looked her up. 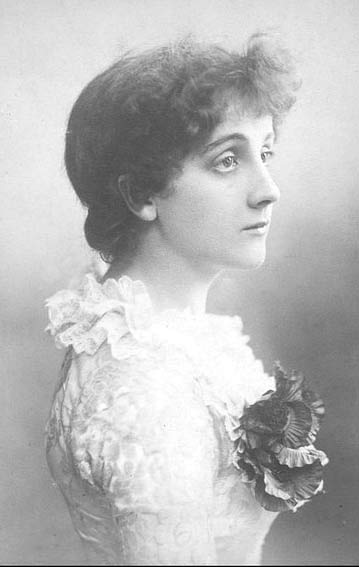 The actress known as Edith Chester was born on 16 March 1864 in Russia where her father was working in the diplomatic and colonial services (he was also Advocate General of Madras).  She was plain Edith Gellibrand when she took to the stage with her sister Lina, and they both found success.  Edith was not only an actress in comedies and tragedies, she also sang mezzo soprano in light opera. It is likely that she was in her late teens when she was engaged by Burne-Jones as one of his Golden Girls.  She wouldn't be the only actress he engaged, as he used the famous Lillie Langtry for his formidable goddess in The Wheel of Fortune around the same time.  In 1885 she toured briefly in America, and returned to England to marry the improbably named Frank Murray Maxwell Hallowell Carew.

Carew had already been kicked out of the Militia when Edith married him in 1887 and he became some sort of property developer.  The couple were not very happy, not helped by an odd accident in 1888, when a rifle exploded during Carew's big game hunting expedition to Zanzibar.  Yes, really.  He sued the rifle manufacturer and won a £1000.

Two years later, Edith, now sporting the surname 'Chester' as her stage name, began divorce proceedings on the basis of cruelty and misconduct, the misconduct happening mainly with a woman called Mrs Alice Seymour, who looked very much like Edith and who was also an actress.  Apparently their likeness was utilised on stage, and off stage too (she says, raising an eyebrow).  All in all, Carew seems to have been a vile human being, violent and viscous  whose attacks on Edith were listed in the newspaper article on their divorce, including shaking her and punching her while she was pregnant.  He also appeared in the newspapers for threatening a man who insulted his wife, and 'haunting' the theatre for the purpose of 'thrashing' the critic.  What a complicated young man... 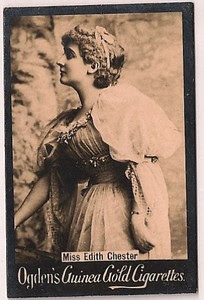 It took until 1892 for the divorce to be granted.  Edith described her erstwhile husband as a man "of loose pursuits, who favoured the companionship of prizefighters, frequenters of racecourses and loose ladies who indulged in the midnight amusements of dancing saloons".  Well!  During the divorce proceedings there was some sort of counter claim, citing that Miss Chester had been seen on a Thames House Boat called Ye Marye with a gentleman called  Loftus Earle.  Yes, really. They were sitting close together in terms of 'theatrical friendship'.  Is that what we are calling it now?  Hmmmm.... 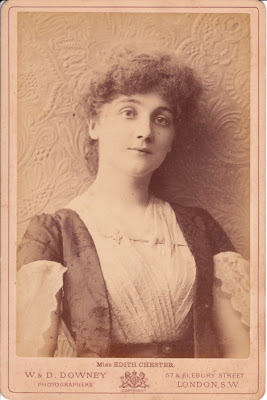 Anyhow, such a scandalous lie was thrown out and Miss Chester got her divorce.  She then went on to marry Mr Earle.  That's the theatre for you.  They were married in the January of 1894, and were blissfully happy for about 10 months, then she got typhoid and died.  Sorry about that. She left the equivalent of around £72,000 to Mr Earle, which is a pretty tidy sum for a woman of around 30, but really that is no age at all.  She packed a lot in to her short life, two marriages, two kids, a stage career and a messy, newspaper-pleasing divorce.

Damn, wouldn't it be nice if for once I found a Pre-Raphaelite model who didn't snuff it obscenely early, and at least Alexa managed to make it to 37.  Oh well, the search continues...
Posted by Kirsty Stonell Walker at 21:26