Today is the 85th anniversary of Thomas Hardy's death, so I think we should all go out in the snow and cough ourselves to death.  Or maybe we could just look at Hardy's connection to Victorian art, whichever is simplest.

Hardy was born just a few years before the formation of the Pre-Raphaelite Brotherhood, yet for some reason in modern culture he is linked with the sort of imagery that we take as 'pre-raphaelite'.  If I was to say 'Far from the Madding Crowd', a lot of people would imagine this...


Saucy wench? Present. Led astray Shepherd? Good-o.  Exploding sheep?  Kaboom.  There is something about the super-realism of the colour, especially in Holman Hunt's work, that lends itself to the drama and landscape of Hardy's Wessex.  Although this isn't a picture of Far from the Madding Crowd (not least because predates the novel) the sentiment, to my mind, is the same.  In both cases, we have the beauty of nature and the wickedness and general fallibility of humans within it. 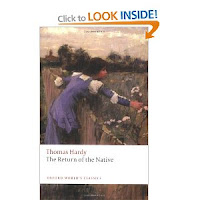 The combination of the beautiful landscape and striking, strong female characters matches the art of the Victorian bohemian, not only Pre-Raphaelite but all the variations of their followers.  Above, examples of work by Waterhouse and Marianne Stokes suit the quiet drama of the novels.  Further works by Julia Margaret Cameron and Millais are used on modern book covers for Tess of the D'Urberville... 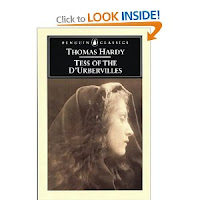 Now, last time I mentioned Milkmaids I got some very revealing emails from certain readers, but can I just reiterate that no, I do not have a three legged stool, and even though I can milk a cow, I don't own a peasant blouse and really, somethings you shouldn't really ask a stranger.  Just behave yourselves.

Tess is a Pre-Raphaelite heroine born too late (aren't we all?) and I can really see how she would have been taken to heart by our Pre-Raph artists.  She has tragedy and spirit, she is wronged but she gets revenge, she is taken advantage of, is a fallen woman but rises like a sword-wielding angel.  She is Hunt's The Awakening Conscience, especially in the final scenes when she finally realises her situation in her guilded cage with Alec.

Hardy's work speaks so strongly of the concerns of the Victorians, the rural turmoil and deep personal tragedies that it seems strange that very little of his work gave life to paintings.  I could only find the following but would be interested to hear of any others...

This painting is also titled 'The Elopement', and shows little of the drama of Tess' story, but is nevertheless a beautiful picture.  The figure of Tess in her big red cloak looks quite vulnerable and seems to shelter beside her protector, but is he really looking after her?  Possibly he is the figure of Alec, calling her 'coz' while planning to deflower her, or is he Angel, looking pious and trustworthy, so Tess leans in, seeking his support.  We all know that won't end well.  Poor old Tess.

Herkomer did a series of quite striking and dramatic illustration to go with the serialisation of the story in The Graphic.  Something about the starkness of the black and white gives extra excitement to the scenes, like you are watching them on stage or on film.  I was utterly astonished to find out that Hardy visited the sets for some of the early films of his stories, but by 1928, quite a few had already been made...

This stunner is Florence Turner, who starred as Bathsheba Everdene in the 1915 film of Far from the Madding Crowd.  Turner was the co-founder of the film company that made the movie, which was filmed around 'Wessex', in various locations around Dorset.

A few years before his death, in 1924, Thomas Hardy visited the set of a much larger-scale, American funded, adaption of Tess of the D'Urbervilles, when that was also filmed in Dorset and Devon.  I think it is interesting that Hardy was embraced more by film makers than by artists, that a modern medium like motion pictures would be inspired by a novelist who could be accused of being the least 'modern' of his contemporaries, as his stories have much to do with timeless conflicts and rural concerns.  Talking of film... 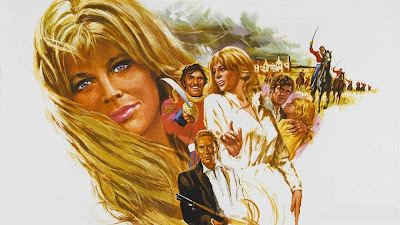 Despite the mascara and bouffant hair (and that's only Terence Stamp), I love the 1967 adaptation of Far from the Madding Crowd as it represents the turning tide in opinion, back to the Victorians.  Before the mid-Sixties, Victorians and the products of their era were not seemingly held in high regard.  I have friends of a certain age who despise Hardy (morbid and dull, apparently) and Pre-Raphaelite art (morbid and funny looking, apparently) because that's what they were taught at school and university.  With the explosion of the epic Far from the Madding Crowd onto 1960s cinema, it seems the Victorians began to be fashionable again, and it became alright to admit liking them, bringing on a subsequent decade that embraced Nineteenth century visual and literary culture in all its different forms, from Laura Ashley dresses to the beloved Ruralists.  We haven't stopped loving them since, and their weirdness and the surprise of some of their more shocking excesses calls to us ever more strongly.  While Dickens has become cosy tea-time-telly fare (rightly or wrongly), Hardy has never lost his awkward edge of dark humour and even darker tragedy.  Can you imagine sitting down with the kiddiwinks to watch a jolly musical version of Jude the Obscure? Yet Oliver Twist, including the clubbing of Nancy, can be sung along to with gay abandon by your Nan without anyone dropping their afternoon tea.  Well, that was my experience.

Anyway, happy death day Hardy.  To commemorate I shall settle down to watch one of my favourite Hardy inspired films Tamara Drewe.  Sorry, but there isn't any snow to die in, so it'll have to do.
Posted by Kirsty Stonell Walker at 15:46