It is very easy when studying the Victorians to think that they are all bonkers.  There is always an element of self-congratulation in studying history, I'm sorry but it's true.  There is always a tiny hint of looking at Victorians and feeling all smug because your husband doesn't become uncontrollably aroused by the sight of a piano leg. Silly Victorians!  Let's see how stupid they are!  Look, they are confused by Evolution!  Their underclothes are hazardous to their own health!  They act all innocent yet have dodgy sexual tastes!  My goodness, they could be on a reality television show.  I'd watch it as long as it didn't clash with The Great British Bake Off.

However, I considered if we modern folk had any cultural concerns that the Victorians would have found odd.  Discounting things like modern technology and things brought forward by modern culture, was there anything that should have been a concern for the Victorians, yet judging by their art wasn't?

Now, this is one of those posts where I don't have a definitive answer as to exactly how much this is or isn't a Victorian concern, but one idle morning while flicking channels and eating brunch, I found myself watching some poor soul being told he wasn't the father of a child he had been raising (the mother had run off with the next gentleman on her list).  Awful.  Surely such a primal thing as paternity is a universal concern, surely it worried the Victorians as much as it seems to concern us today?

There is a staggering statistic that 1 in 5 children might not have been genetically fathered by the chap they call 'Dad' (and 'Dad' believed he was the father until his appearance on a morning talk-show).  Now, there are several very obvious reasons for assuming that the statistic would be much lower in Victorian times, but still the issue of 'the cuckoo in the nest' must still have reared its head.  Heaven knows, women were committing adultery wholesale, if art is anything to go by...

If you look at Victorian art, women are falling left right and centre.  The woman in Augustus Egg's Past and Present triptych has literally fallen as well as metaphorically, and by the amount of toppling ladies in art and literature it's astonishing women got anything done, as they seem to have spent so much of the 19th century under a gentleman.  Hopefully you have been able to catch the new film adaptation of Anna Karenina, where naughty Anna plays away from home and gives birth to a baby, who ends up being cared for by her husband.  Likewise, we have the marvellous biography Mrs Robinson's Disgrace where a married woman commits adultery and records it in her diary which is then used against her.

The Victorians were certainly not shy of showing domestic unrest, and not backward in showing women undermining the family dynamic through adultery, so why not show the rest?  The Victorians loved a bit of narrative art, surely they would love this piece of voyeuristic interest?  After all, they weren't afraid of showing what would happen if the husband had created children through adultery... 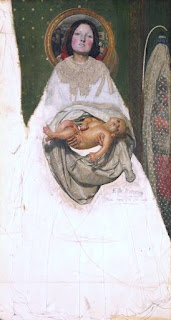 If you believe the most popular reading of Take Your Son Sir! by Ford Madox Brown, then this is a picture of a woman presenting a startled man with the results of his dalliance.  Like Retribution above, there is no shortage of men being caught out.  The artist William Powell Frith kept two households, one containing his wife and twelve children, the other containing his mistress and seven more little Frithlings.  He was only caught out when he was seen posting a letter in London when he was meant to be away.  Although the gentleman above seems utterly mortified to be shamed in front of his horrified wife, it is possible that such goings on carried with them a sense that it was understandable that gentlemen needed to have more than one woman on the go, because you know what little scallywags boys are.   Maybe the subconscious fear was that if you started showing images of men unknowingly raising children who are not theirs then it might give some people ideas...

The first question someone asked me when I said I was looking into this was 'How on earth would you show that in a picture?'  I think it would be very easy, and heaven knows more complicated narratives have been shown in Victorian images. You would just need to show a family group with one of the children looking very different from the rest - for example you could show a family having breakfast, all dark haired except the youngest son who is bright blonde, and the postman, delivering the letters with a devilish smile, is also blonde.  Heavens knows people were quick enough to humorously ask Mr Walker if he was sure he was Lily-Rose's father, due to the fact that she is so fair and we are dark-haired.  Those were complete strangers in supermarkets.  Charming.  Anyway, I digress, but there are no images that show this.  Why not?

I think the above image give us a hint, as does the novel Wuthering Heights.  Look at the scene above, albeit from slightly before the Victorian period: doesn't it look rather formal and legal?  The moment a child is or isn't fathered by a man, all kinds of legal issues raise their heads.  In a time before DNA testing it would have been practically impossible to prove whether or not your son was actually yours, which is why I think it didn't loom as large in people's imagination as it seems to today.  After all, I'm guessing legally, once married, your children were yours whether or not you actually fathered them, as there was no proof to the contrary.  That's all well and good if you can live with it, and if there is nothing else at stake other than trust and pride.  In Wuthering Heights it is hinted (especially in modern interpretation) that Heathcliff is actually Mr Earnshaw's son, brought in to claim his rightful place, and that causes no end of trouble with Hindley.  The legal implications when the stakes are slightly higher than a horrible farm on a moor are somewhat more destructive.  Given the Victorian's love of history, they may have learnt a lesson from the Duke of Monmouth...

Like Heathcliff, Monmouth was the illegitimate son, this time of Charles II and his mistress Lucy Walter, and he wanted to take over the family business, in Monmouth's case, England.  This lost him his head and raised the problem that when illegitimacy raises its head then chaos ensues.  This is difficult enough to deal with when a woman comes forward with a child fathered by a 'respectable' man, as in Millais' Retribution, but imagine the devastation brought about a claim at the core of your family is a cuckoo, an heir not of your making.  Such a thing would be almost impossible to prove, and would split your family into fragments, ruining everyone including yourself. However, you might be passing on your money, your position, your place in society to someone who isn't your own blood.  I wonder if the Victorians never showed it because the whole idea was terrifying.

Well, back to daytime telly, and the vicarious pleasure of confrontational talk-shows.  If you think about it, for the Victorians, looking at narrative works like Past and Present, was just like their Jeremy Kyle, but with a lot less swearing.

Unless someone stood on your foot in the gallery.
Posted by Kirsty Stonell Walker at 16:08