Ladies and Gentlemen, last night I met Jan Marsh.  Her books are the reason I got into this crazy business that we call Pre-Raphaelite Social Art History, and I would just like to recommend the following books to anyone who wants a gorgeous overview of the Pre-Raphaelite women... 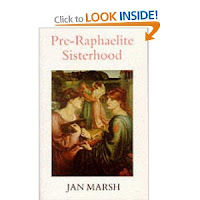 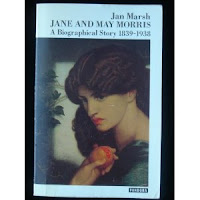 I have all of these and Pre-Raphaelite Sisterhood especially is invaluable in the depth of research and the amount of detail given about the lives of the models and muses of our beloved artists.  If you want a book of pictures of each of the models (both photos and the paintings) you can't go wrong with Pre-Raphaelite Women, it's where I started my research all those years ago.  Her works on Elizabeth Siddal and Jane Morris are flawless and inspiring, which leads me to the point of this post... 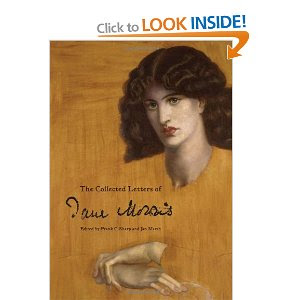 The reason I met Jan Marsh last night was I was fortunate enough to attend the book launch for The Collected Letters of Jane Morris at the Society of Antiquaries (which is next door to the Royal Academy) in swanky London town.  I know you are never meant to meet your heroes, but I was glad I met Jan because she was wonderful, even when I rather over-enthusiastically hugged her, but it's her own fault for being splendid.  I stand by my right to hug anyone I think is brilliant, so you have been warned.

Anyhow, the price of this collection is a little prohibitive to anyone not fortunate enough to be given a review copy, but that's what Libraries are for, so I would recommend you order it as soon as you can and I shall tell you why...

Jane Morris is not my favourite stunner.  This will come as a surprise to no-one, and a large part of my problem with her is that she says nothing.  Her best known feature is her gloomy silence, her brooding unknowable presence, at worst portrayed as a dementor, sucking the happiness and life from those she touches.  Yes, yes, I'm being harsh, but look at Rossetti's images of her, they are hardly life-affirming and jolly are they?  So poor Jane, much the same as Fanny and Lizzie, became a cartoon version of herself, the moody one, as opposed to the suicidal one or the tarty one.  The joy of this collection is that she talks.  And talks.  And talks.  About anything and everything.  She talks about books, art, business, the weather, her health (a lot) and her family.  If you consider she started life as a stablehand's daughter, the level to which she was educated after meeting William Morris is astonishing.  Jane is astonishing, in all ways, some of then good, some of them not so much.

On the plus side, she is clever and her thoughts on books and art are always interesting.  She recommends books to Rossetti, she passes judgement on the art of their friends and she talks with authority and confidence.  She has a sense of humour which is quite self-depreciating, and you get the impression that she found the notion that people found her appearance beautiful to be puzzling.  She shows great affection for her friends that she writes to, and her family which she writes about.  The anguish she expresses at the time of Rossetti's illnesses and death is terrible, but the shock and trauma she suffers at the death of her husband is an moving counterpoint to the received wisdom that she and William were not close.

Less positive is that in some of the letters, Jane is rather scathing and cruel about people they knew.  She writes to Rossetti that Fairfax Murray's child died because his wife was not able to care for children, but never mind because they can always have more.  She is rather mocking of Burne-Jones and his career.  However, it must be taken in to consideration that she was writing to a close friend and the letters were never meant for public consumption, and which of us has never expressed a rather bitchy comment at the expense of another?  Imagine having all those comments written down and published.  Yikes.

The book is split into sections, each with a bit of biographical detail prefacing it, and each letter has relevant footnotes explaining who people were and why Jane knew them.  Dotted throughout the text are black and white photographs and images of the people involved in the letters, which is really helpful, but crowning it all are the gorgeous colour plates, showing some images that I'd never seen before of not only Jane but also May and Jenny.

Does the book make me like Jane more?  Difficult to say, but I do feel like I can approach her with more understanding, which is achievement indeed considering the silence that surrounded her until now.

And I met Jan Marsh.
Awesome.
Posted by Kirsty Stonell Walker at 18:02