Who's Been a Naughty Boy?

In between taking large quantities of cold medication (I've gone a bit chesty, if you know what I mean) I have been thinking about what to write for today's blog. Kind of counter-inspired by the Russell-Cotes Art Gallery and Museum's latest exhibition 'In the Footsteps of Gods and Heroes', I've been thinking about villains of the Victorian art world, and especially Charles Augustus Howell. 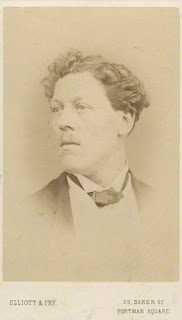 Oh, Mr Howell, how very spendid to see you.  Charles Augustus Howell is one of those people who is fascinating, intriguing and rather seductive, and the undoing of many a person, both ladies and gentlemen.  Born in 1840, he lied his way through the next 50 years before being found in a gutter with his throat slit and a shilling shoved between his teeth.  Or was he?  Now that's the problem with Howell...


We can be vaguely confident that he was born around 1840.  He claimed to be the son of an English drawing master who was living in Lisbon, and a Portugese mother, but he was a bit vague about detail.  By the time of Charles' marriage to his cousin Frances Catherine Howell, or 'Kitty', his father has obviously had a career change and is listed as a 'merchant'.  But we'll gloss over that...  The stories he told of his youth in Portugal are pretty fabulous: card-sharping in Oporto and diving to loot Spanish Galleons of booty.  Sigh, he sounds dreamy.  No wonder Whistler called him 'the creature of top-boots and plumes, splendidly flamboyant.'  My own youth in 1970s Wiltshire contained very little in the way of card-sharping and Galleoning looting, so I'm easily impressed.  As were many others, as we shall see...

Howell entered Pre-Raphaelite circles in the 1860s when he began to work as Ruskin's secretary, and also modelled for Rossetti, being a rather handsome fellow...

I think it is probably no coincidence that Rossetti welcomed Howell into his life after Lizzie's death when possibly his judgement may have been a little wobbly.  Howell was able, charming and persuasive, and if you needed something Howell was your man.  Need some more blue and white china?  Howell would oblige.  Need some paintings selling?  Howell was your man.  Need your dead wife exhuming?  Charlie's your boy.  Pre-Raph's Mr Fix-it was the one who secured the return of the little book of poems, inconveniently left in the embrace of Lizzie.  What a man!

Ford Madox Brown described him as being 'second to no one in England in his intimate knowledge of ancient and oriental furniture, china, tapestries', William Michael Rossetti commented on his 'quick and accurate discernment of the merits of works of art and decoration of many various kinds, along with extensive practical knowledge of their market value', testament to Howell's sharp sense of business and knowledge of their world.

Am I the only person who thinks 'Blimey, I bet her frock made her popular at parties...' Kitty Howell was as beautiful and beguiling as her cousin-husband.   Their wedding in 1867 was attended by William and Jane Morris, Ned and Georgie Burne-Jones, William and Christina Rossetti and Ford Madox Brown.  The Howells moved in affluent and cultured circles and were trusted friends to all.  Rossetti commented in 1872 that 'I can express complete confidence in his judgement on questions of art'. And everyone lived happily ever after...hang on....

According to Georgie Burne-Jones, Howell was 'one who came among us in friend's clothing...but inwardly was a stranger to all our life meant.'  Now, that doesn't sound like a ringing endorsement.  While Charles and Kitty Howell were a golden couple, much beloved by all, there was another side to Howell which was not so beguiling.  Sacked by Ruskin in 1870, Howell failed to keep the exhumation of Lizzie Siddal a secret, thus causing scandal and unhappiness from an already terrible event.  He also took a lover in 1873, the artist Rosa Corder, another beautiful woman.  Some chaps get all the luck...

It was with Miss Corder that Howell started another little business venture, well two if you count their daughter, Beatrice Ellen, born in 1883.  Rosa was a talented artist who trained under Frederick Sandys.  Sandys' style was very similar to Rossetti's....can you see where this might be going...?

Allegedly, Howell convinced Rosa to produce 'Rossetti' drawings that he then sold on as originals.  Naughty Howell.  This soured relationships between Howell and his Pre-Raphaelite chums, causing Rossetti to write the slightly less friendly limerick 'There's a Portuguese person named Howell, Who lays on his lies with a trowel, When I goggle my eyes, And start with surprise, It's at monstrous big lies told by Howell.'

Apparently, it was Fanny Cornforth who gave Howell his nickname 'Owl', albeit inadvertently.  When asked if she had seen Howell while she was out of town, Fanny replied that she had 'see'd no 'Owl', and it stuck. It's ironic that for all his big stories of heroic daring-do and involvement in a political assassination (the attempt by Felice Orsini to assassinate Napoleon III), he was undone by some rather silly forgeries.  However, neither his wealth nor his amazing reputation (or rather infamy) seem to have suffered too much.  Conan Doyle apparently based Charles Augustus Milverton
Howell died, aged 50, of tuberculosis, or at least that was the official line.  The rather more delicious unofficial story was that he was found outside a pub in Chelsea with his throat slit.  The cover-up commenced and the slitting was all explained by a 'post-mortum'.  Now, far be it from me to dismiss a juicy tale, but if Howell was a big a liability as it seems, why bother covering it up?  He had faked his death before, in order to make a fortune from the sale of his stuff, so people were rather surprised when he actually died, properly and for real.  Ellen Terry wrote to a friend 'Howell is really dead this time - do go to Christie's and see what turns up'.

So, what can be made of this figure?  Was he a rotter, an opportunist, a liar and blackmailer? Possibly.  Should he be played by Kiefer Sutherland in a film?  Almost certainly.  Would I wear Kitty Howell's dress?  Given half a chance.  In the end, he does rather enliven events and in many ways we fulfil his wishes in still talking about him.  What ever else Charles Augustus Howell may have wished to be, he obviously wanted to be immortalised by his reputation.

Congratulation Charlie, you may well have got your wish.
Posted by Kirsty Stonell Walker at 22:22