Through the Doors (Part 2) 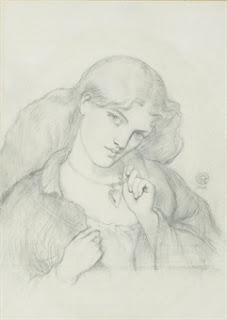 This is the original drawing for the oil of the same title. I’m not sure of the model, she’s a random brunette, possibly Ellen Smith, although there is a portrait of Frances Graham from 1869 which is similar. I actually prefer the sketch to the finished oil, as the lightness of touch gives the playful subject life. Don’t get used to playful, though. Here we go…
21. Study for the Head of Lady Macbeth (1876) 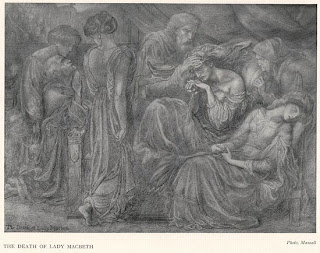 Hello Jane, fancy seeing you here.Now, the above image isn't what was hung at Fanny's, because I can't find a copy of that.  It is described as 'Life size, three-quarter looking to the right, nude shoulders.'  It was a study for the central figure, Jane Morris, and it's in chalk.  So, it's a life-size chalk portrait of Jane.  I really want to see that...
22. Mnemosyne, or The Lamp of Memory 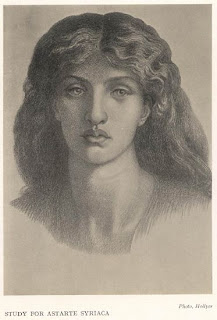 Again, this is not the one on display, however, from what I can gather this is just a chalk version of the pencil sketch in Fanny's collection.  This was a small pencil study for the head of the woman in Mnemosyne, another picture of Jane.  This is an astonishingly beautiful portrait, look at her eyes.  I find the portraits of Jane quite intense, the look on her face is uncompromisingly aching which is why I don't often put them up either at home or work.  I know Jane's face is gorgeous but there is a certain LOOK AT ME quality that I can't live comfortably with.  Interestingly, it seems Fanny could...
23. A Venetian Lady 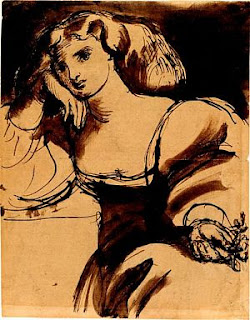 A small pen and ink sketch of a Fanny-like woman, ‘One of Palma’s Daughters’. It’s a curious addition, but not unusual of Rossetti’s ink sketches, reminding me a lot of the first picture of Bocca Baciata, drawn in the letter to Boyce.
24. Mrs William Morris (1873) 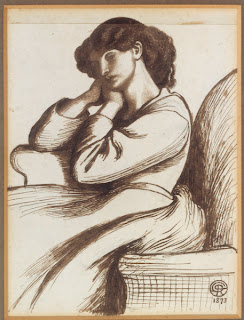 Curiously, this is described in the catalogue as being a picture of Jane ‘crouching on end of large sofa and reading’, yet this is the picture that has the provenance of being No.24 in The Rossetti Gallery exhibition. I did try and look for a picture answering that description, but nothing seems to show Jane ‘crouching on end of large sofa’. What an odd description…
25. Heart’s-Ease (1866)
Sorry, no illustration, although it wasn’t for want of trying. We even had a call-out on Facebook where the massed forces of Pre-Raphaelite knowledge had a look too. If anyone can send me a copy of this image, I’ll send you a signed copy of the new edition of Stunner. We’re looking for a picture described as ‘Half-length figure of a girl sitting on a cushioned cane chair, her cheek leaning on her right hand, the left resting on her knee, and holding a pansy.’ Good luck my friends!
26. Study of Female Head (1875)
Oh, for heaven's sake, not this one either.  The description is 'Full face inclining to the left' and it has the date October 11th 1875.  It's in the 'Jane' time period, so it may well be Mrs Morris, but why wouldn't she list it as such?  Maybe Fanny knew it was a study for a painting.  Anyway, again, if anyone knows where this picture is, let me know...
27. Study
Okay,  I'll try and make this the last one I can't bloody find.  I can't even find an entry for this on the Rossetti Archive.  It's described as 'Figure of a girl sitting and clasping her knee with both hands.  The head inclining towards the left.  Sketch for a watercolour drawing never executed.'  I feel like I'm setting homework with today's blog...
28. Mrs William Morris (1875) 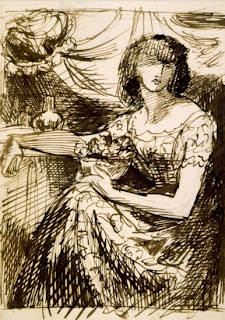 This is a sketch for an intended companion piece to La Ghirlandata and would have been gorgeous. From 1875, it shows Jane in a patterned dress, holding a bowl of flowers, leaning on a table. Of all the beautiful images of Jane we have, I would love to have seen this as La Ghirlandata is a gorgeous picture. I wonder if this one would have had a ‘colour’ in the same way? We shall never know…My money would have been on blue.
29. Salutatio Beatricis 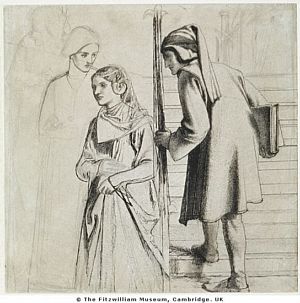 The meeting of Dante and Beatrice in a street in Florence, shown here as a sketch for the 1863 watercolour. A copy of this ended up in the Red House and may well be the reason why Beatrice looks like Jane Morris rather than Lizzie Siddal. Fanny’s likeness is in the resultant watercolour as one of Beatrice’s ladies, which may explain the presence of this partial sketch in her collection.
30. Mary Magdalene at the Door of Simon the Pharisee (1870) 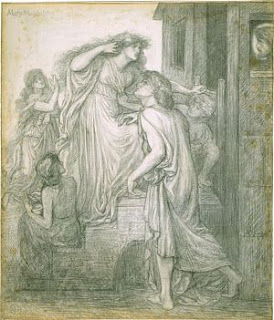 Not the Ruth Herbert version of 1858, but Jane Morris, clambering the steps, her hair all flowing.  It's described as an original cartoon for a life-size picture, never executed.  Compared with the original, which is shown later, it's much simpler, concentrating on the figure of Mary, or Jane, again looking anguished.  I also find it fascinating that Rossetti liked to make pictures of Jane life-sized.  Was it just a move he made later in life, towards a larger scale, or was it something that was particularly to do with Jane, as if she was there with him, literally large as life in his work?  I think that is possibly why I find the pictures of her so emotive, you are face to face with her and she does not look happy.
31. Fazio’s Mistress (1864) 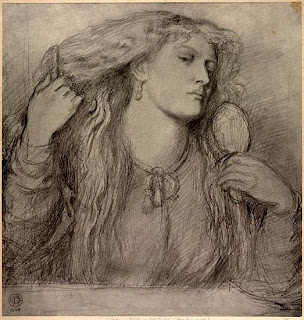 Now, we know this picture as Woman Combing her HairLady Lilith rather than Fazio’s Mistress but if you think about it, this beautiful image works equally well as the lovely, sensual mistress. Actually, I think Fanny’s rather hearty, jolly face is a bit strange as a devil-woman, but who knows, possibly the devil should be a rather saucy looking young woman, you wouldn’t suspect her, or rather you’d have your clothes off before you did…

We now move on to a section entitled ‘Photographs’, which is odd as some of the drawings in the section before are photos of the originals. It might be that the following are smaller than the originals or in some way are different from ones like No.4.
32. Dante Gabriel Rossetti (1863) 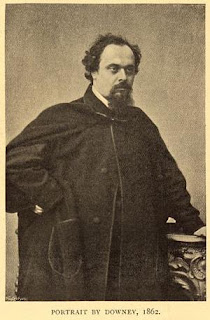 The catalogue dates the photograph as 1863, but there was no photo that I can find from 1863, and this picture has the Rossetti Gallery provenance. This is a fairly iconic image of him, dark-eyed, wearing that huge cloak coat, his rotund form pushing the edges apart. Fanny loved this image, she mentioned it, had it on her mantelpiece, and held it dear, more dear than images of either of her husbands.
33. Dante’s Dream (Study for the Head of Dante) 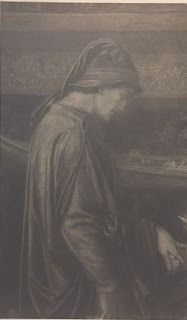 34. Dante’s Dream (Study for the head of Attendant Lady) 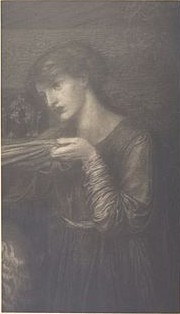 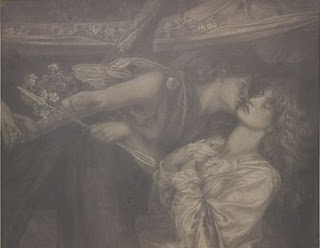 Studies for the marvellous, huge oil, second version, with Jane as Beatrice, or as the catalogue rather gleefully points out, ‘the dead Beatrice’. The Attendant Lady is Marie Stillman, who Fanny claimed to have known when she wrote to Samuel Bancroft, and it is suggested that the figure of Dante is taken from William Stillman. The figure of Love is a rather lovely gentleman called Johnston Forbes Robertson, who I feel the need to know more about, for strictly professional purposes, obviously. Where’s that time machine when I need it?!
36. Monna Vanna 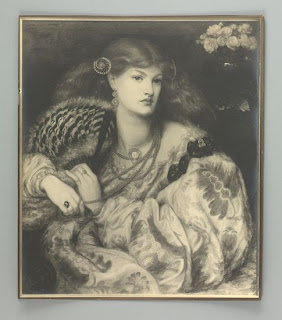 I have this theory that Monna Vanna was originally a painting of Fanny before over-painting her with Alexa. Look at Fanny’s face in No.5 from yesterday, hang on, it’s too tricky to flick between entries…. 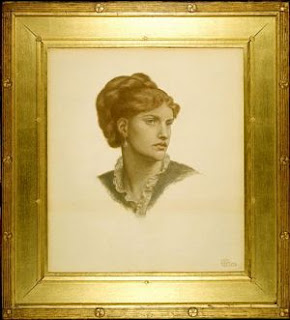 I see similarities between the images, and as far as I can see there are no preparatory sketches for Monna Vanna, so where did it come from? Although this pastel is much later, it doesn’t mean that any sketch it was based on wasn’t done earlier and lost. Fanny knew Alexa and didn’t seem to mind her too much, but she didn’t hold many images of her, as opposed to Jane.
37. Lady Lilith 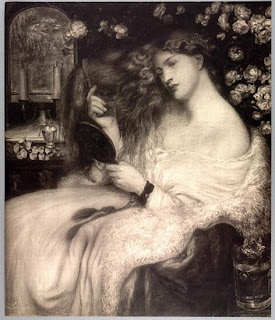 Ah, now, this is an Alexa image, but originally an image of Fanny, seen here. In the catalogue entry there is no mention of the business of scrapping this version that even William Michael believes to be the better version. I actually prefer the image of Alexa, who does look like she wants to eat your children, rather than Fanny who is more likely to fall out of her frock before she manages any dastardly deeds.
38. Hesterna Rosa

A photo of a drawing owned by Fred Stephens, showing a scene of a woman having an ‘Awakening Conscience’ moment in a brothel. Unlike Found, the picture more often compared with The Awakening Conscience, this image focuses on the woman not having shame dumped on her, but realising that a front of jollity cannot truly mask a heart full of, well, tiredness. The woman in the image feels ‘like flowers that fade’, worn by strife. Like the fallen woman in Found, she has a moment of clarity that her life is terrible, but it is an inward misery rather than a dramatic moment of admission.
39. Lucrezia Borgia 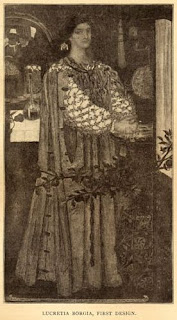 Not only did Fanny have the version where she was the model (no.18 from yesterday), she also had a photograph of the original, with its dark haired model. According to the catalogue, Charles Howell owned the watercolour and destroyed it with Rossetti in 1867. What on earth could have inspired Rossetti to destroy it?  It looks okay to me...T'uh, artists....
40. Mary Magdalene at the Door of Simon the Pharisee (1858) 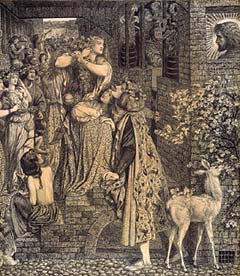 Oh, here's the other one. Just in case you were wondering where the earlier version of No.30 was, Fanny managed to get a photograph of that one. Ruth Herbert is the repentant Magdalen in this one. I always think of that picture of Boyce and Fanny when I think of Ruth Herbert, because her portrait is hanging on the wall behind the couple. I’m not sure if Fanny knew Ruth, but it’s possible they met. Maybe Fanny felt that she ought to have both Mary Magdalene pictures for the sake of getting the set.
Join me for the final day for a load more Jane Morris. Jane gives the impression of her later life spent at Kelmscott, surrounded by images of her sad face, but why on earth would Fanny want to be surrounded by them too? A question for tomorrow, I feel….
Posted by Kirsty Stonell Walker at 16:28