Yesterday was spent in a grand tour of sites of Fanny Cornforth's life and other Pre-Raphaelite hot-spots for Stunner's second edition.  I was ably assisted in this venture by Miss Stephanie 'Stealth' Holman (Resting Ninja who used to wrestle white tigers for diamonds).  She collected me from Waterloo and off we went on a whistle-stop, crippling tour of the following places... On August 11 1860, Sarah Cox, spinster of the parish, and Timothy Hughes, drunk, gorgeous engineer married, and lived happily ever after.  Okay, the last bit isn't true, but this is definitely where they married.  It is suggested that Fanny dashed off to the alter with Mr Hughes after Rossetti married Lizzie, and his finer qualities seem to have been lost in the mists of history, so I think it is appropriate to make some up, seeing as all we remember Tim Hughes for is being a drunken incubus, which doesn't seem fair.  As part of my 'extensive research', I can categorically say that Mr Timothy Hughes was a world-class lamb-juggler and founder member of the world's first boy band, with Isumbard Kingdom Brunel and Charles Dickens...okay, okay, but what I do know if that he was allegedly the model for the boy David on the left wing of The Seed of David triptych. 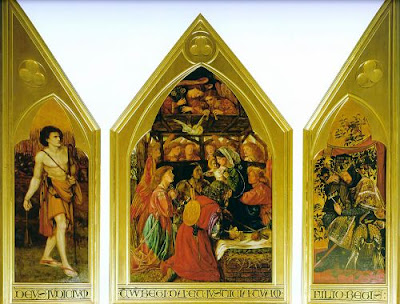 So we know he was possibly fine looking.  Anyway, the marriage lasted until Hughes' death in 1872, when he was 42, but the couple only seem to have lived together for a short while, with Hughes being discarded as soon as Fanny could leap back into Rossetti's bed. However, what Mr Hughes did give us is Fanny's surname.  I think it is more than likely she called herself 'Cornforth' after Timothy's Step-Father, George Cornforth. Anyway, back onto the tube and off to the next location! 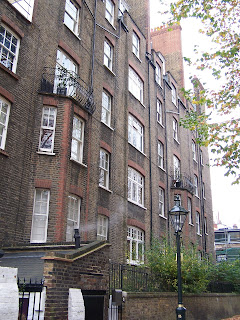 This is a view from the lane behind the property as the front of the building had been messed about with in about 1902 (the date is based on a plaque on the opposite building which had also been converted to flats), but in this rather splendid building Fanny lived with her second husband John Schott and his son Frederick in the 1880s and 1890s.  It's a beautiful, leafy area and the house is enormous.  Life for Fanny at this point was easy, her money plentiful due to her actions after Rossetti's death, which led us to this rather lovely building... 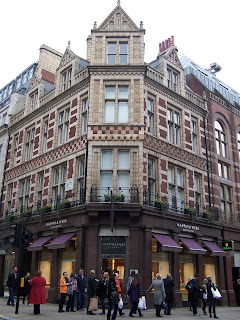 Mmmm, Mappin and Webb...Also, home in 1882/3 to Fanny's tribute to Rossetti, 'The Rossetti Gallery', set up after his death, in competition with the Royal Academy and Burlington Fine Arts Club's memorial exhibitions.  Incidentally, this building is only just down the road from the Royal Academy, so close you can spit into it from here.  And she probably did. 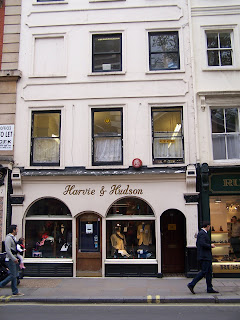 Mr Schott, a bandleader from Edinburgh, was a gentleman of many talents and one of them was making money.  He and Fanny ran the Rose Tavern for many years, which now is Harvie and Hudson, gentleman's outfitter and general shop of couthness.  I visited Harvie and Hudson when I published Stunner the first time and they showed me the beautiful tiled hallway, but on my return yesterday I was sad to see the sign had been removed.  A picture of the sign appears in Stunner; it was a metal sign with tiny roses on the edges, possibly left from when it was the Rose Tavern.  All that remains now are the roses in the plasterwork. 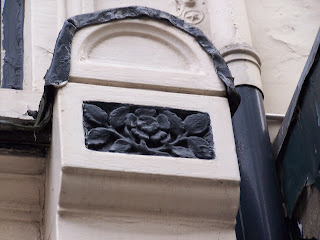 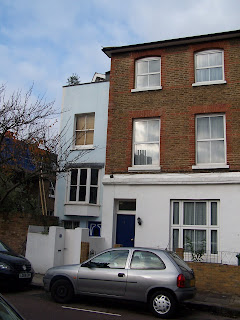 In 1901, this was home to Emily M Squire, a widowed dressmaker, and her children, and their lodger, Sarah Schott.  Fanny (or Sarah Schott) as she was known by this point, had lost not only her husband, but also her stepson Fred, and her money was dwindling.  It was from here she was taken by her sister-in-law Rosa Villiers, off to Hove and it has been presumed she died there in 1905, but no proof has been found.  Yes, I'm working on that too... 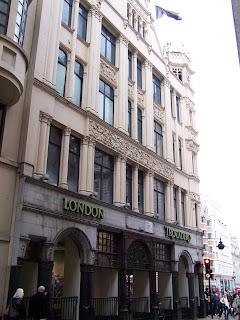 I really wanted to see the building that was the Argyll Rooms, where Fanny would meet Boyce and Rossetti, but of course it no longer exists.  Down a very narrow alley we found the site, just south of Soho, and although a lot of the buildings had been hacked about in various eras, there was a sense of a grand, yet slightly seedy meeting place. 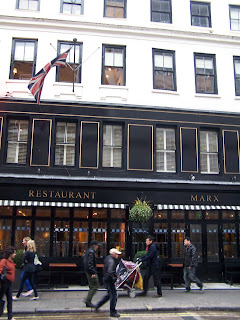 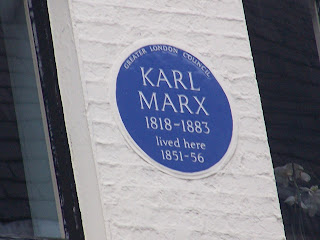 I think Karl moved out when Fanny moved in.  Fancy a bit of company, Comrade? Obviously not.

The only place I couldn't take a picture of was 14 Tenison Street, Lambeth, which doesn't really exist anymore, it's now a whopping great big IMAX.

While I was up in the big smoke, it was too irresistible not to take a few other Pre-Raphaelite images.  Partly I wanted some images to work from for my book about Alexa Wilding and partly there was one special place I wanted to visit... 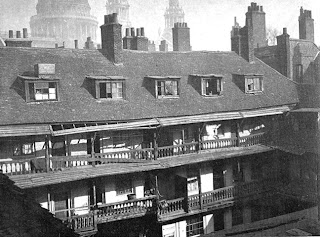 No, I wasn't expecting to see this exactly, but I really should have put the words 'St Paul's Cathedral' and 'Second World War' together, as this is what Warwick Lane looked like in the 1940s.... 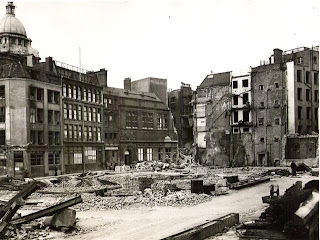 So, really I shouldn't have been surprised by the very new buildings lining Warwick Lane.  I wasn't expecting that many police though.  Blimey.  Anyway, sorry Alexa, no joy there.  How about your home in Kensington?

Alexa Wilding Picture 2: 33 Redcliffe Road, Kensington
Not far from Fanny's home in Drayton Gardens is the leafy and gorgeous Redcliffe Road.  How exactly did Alexa, daughter of a butchery family from Newgate afford to buy a house down here? 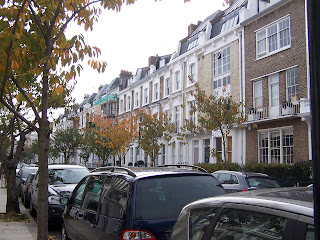 Well, how delightful!  So, which one is 33?  As we walked down the road, we gasped and sighed at the lovely Victorian villas, until we reached 33... 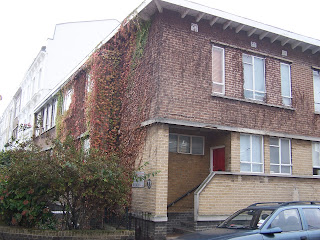 Rats.  Stupid bombing, I was beginning to take it personally. To be fair, there was one other house missing from the row, more than likely the victim of sticks of bombs picking off individual houses. However, her place would have looked a little like the one on the opposite side of the road... 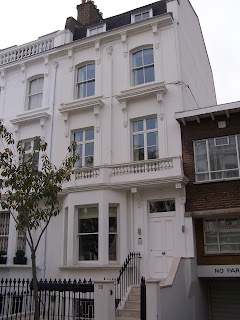 Mmmm, pretty, and very posh.  Makes you wonder how a lass on a pound a week could afford to buy it...

So Stealth and I rambled all over London, using a combination of map and Miss Holman's ability to know location by where she had been very drunk (she's such a louche influence, which is why I love her) and our final destination was this rather unimpressive house in a Square by Bloomsbury... 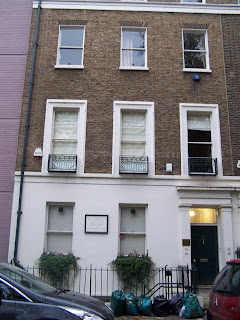 Fairly typical of many houses in that area, and quite unremarkable until I tell you that I was stood in Red Lion Square, and that white plaque on the wall?  Have a look.... 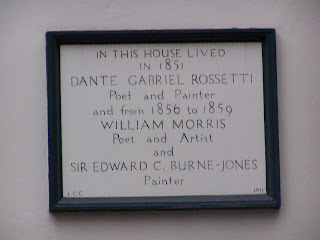 How could I not visit?  Astonishing to think that Miss Holman and I were stood outside the house where Rossetti, Morris, and Burne-Jones (and Walter Deverell) lived, back when things weren't utterly messed up for them all, before death, deceit, adultery and other crimes against each other loosened the bonds of brotherhood.


We sat in the garden in the middle of the square and enjoyed the peace, while Miss Holman rubbed her ankle and I rubbed my neck, both of which were agony by this point.  We suffered for their art, and for your entertainment, but I wouldn't have missed it for the world.

Fanny Cornforth and Karl Marx, who'd have thought it?
Posted by Kirsty Stonell Walker at 09:17