Poor Walter Deverell.  Scarcely known or mentioned in Pre-Raphaelite writings and missed entirely in Desperate Bromantics (as I am now calling it), the brief flame of Walter's talent was well and truly snuffed by not only his short life but also his omission from the cannon of Pre-Raphaelite art.  It could have been so different for lovely Walter, so what went wrong?


Partly it's due to the fact that Walter never made 'Brother'.  He declined full membership, despite being very close to the other Brothers, due to his appointment as assistant master at the Government School of Design which he felt may be jeopardised by being a member of a revolutionary group.  It was rumoured that he was to have replaced James Collinson in 1850, but it was never to be.  Similar to others who were present at the early days of the Brotherhood, he was both a painter and a model, sitting for figures in the works of Holman Hunt, Millais and Madox Brown.

Walter's face can be seen in the expressive features of Hunt's Claudio, being denied by his sister the key to his freedom, her virginity.  I love the awkwardness of his long legs and pointy shoes (even more pointy in the sketch) and the petulant expression on Claudio's face.  Equally as wicked is Isabella's brother in Millais' Isabella, and Deverell's face can be spied at the back beyond hot Fred Stephens.

Born in Charlottesville in 1827, his family moved back to England after his Father left his brief post as tutor at the University of Virginia.  He met Rossetti in 1845 at Sass's Drawing School and the two became firm friends, sharing rooms in Red Lion Square in 1851.  Look, there is a plaque commemorating it:

Rather cruelly, I have a book that says his most important contribution to art was his discovery of Lizzie Siddal in a hat shop. Well, now, that's fighting talk.  Anyway, he used Lizzie for his model in Twelfth Night, a painting which says a lot about the situation between Walter, Lizzie and Rossetti...

On the left, Lizzie as Viola (who is dressed as a boy) looks adoringly at Duke Orsino (looking remarkably like Walter) while Rossetti plays the fool.  I'm sure he didn't mean anything by it...This is the first of Lizzie Siddal's many appearances in paintings, and it seems appropriate that the gentleman who discovered her got to paint her first.  This is certainly his most famous picture, and often the only one of his works shown, mainly due to its overt Pre-Raphaelite pedigree.  It would be easy to see him as a one-trick pony, but I personally love The Grey Parrot of 1852 and A Pet of 1850 far more than Twelfth Night.


They both may carry a 'women as caged birds' message but the colours in both are gorgeous, especially the muted tones of The Grey Parrot. The same can be said of Eustatia from 1853. 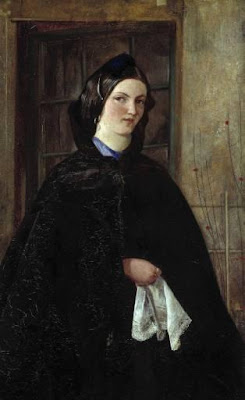 The woman has an air of mystery, all that is visible is her face and her hand, clutching a handkerchief.  Her expression is vaguely teasing and proud, in conflict with the presence of the hankie, which hints at sadness.  She doesn't look sad, she looks like she will break your heart and stomp on the pieces.

Deverell was by all account a pleasant looking young man, and jolly, flirty company.  For me, the essential portrait of him has to be the figure in Ford Madox Brown's Chaucer at the Court of Edward III:

Poor Walter had a promising start to his career, and his work The Irish Vagrants gained much praise, even though Hunt complained that Walter had fallen for the fashion of 'dwelling on the miseries of the poor, the friendless and the fallen' (which is rich coming from the painter of The Light of the World).

All in all, Walter's painting career lasted around five or six years before he died of Brights Disease, a terrible kidney illness, abandoned by his troubled family and fading in a small house in Chelsea.  Apparently, he was working on the cheerily titled The Doctor's Last Visit and Young Children watching a Funeral before his death, which hints at his state of mind.  Had he lived, it has been written that he may have outshined Millais, and achieved mainstream success without diminishing romantic and poetic qualities.  However, poor Walter died and all we know him for now is a handful of paintings and a fortuitous visit to a hatshop.
Posted by Kirsty Stonell Walker at 19:56