In an attempt to take myself more seriously as a cutting-edge art historian, I have for you this evening a review of a brand new exhibition from the Russell-Cotes Art Gallery and Museum in Bournemouth, entitled Stripped: The Body Beautiful.  The new show has a range of beautiful Victorian nudes together with art from around the world and modern works showing the change and contrast in attitudes to body and body-image in art and society.  If I was not taking myself seriously as an art historian, I would call this piece ‘Nudie Fun with Mrs Walker’, but we’ll have none of that nonsense here, thank you very much.
The images on display are as diverse as a petal pink Etty girl, a Napoleonic-era superstar’s hand and film footage of modern plastic surgery, together with a beautiful set of Maori portraits.  I’ll start with Captive Andromeda by Arthur Hill.
She is hung next to a line of Ettys, which are very pretty but I went off Etty after I attended the Tate exhibition on the Victorian Nude.  I was young and innocent and more to the point on my own in front of an Etty nude, and suddenly a voice beside me intoned in a low and purposeful manner ‘Marvellous stippling on the buttocks, don’t you think?’
It has coloured my opinion of Etty since.
Anyway, isn’t Andromeda lovely, hanging about, waiting to be monster nibbles?  Mr Walker (who is Collections Officer at aforementioned Russell-Cotes - may I point out that it wasn't the sole reason I married him) thinks she is stood on Christmas cake icing, which I can’t argue with.  The contrast between the sharp grey rock, sliced in unforgiving plains behind her, and Andromeda’s peachy curves makes her peril seem greater, despite her rather campy pose.  I can almost hear Mr Hill shouting ‘Both hands up, and put some effort into it, I don’t care how long you’ve hung there!’
On the other side is William Arthur Brakespeare’s  I Corinthians XI, IV and if you have a hair fetish, then do I have a treat for you.  Look at the locks on this girl, astonishing.  It reminds me of a photograph of Fanny Cornforth where she is combing her ankle length hair with a comedy comb.  Reading the passage of text that the painting is named after, you get the impression of either an irony or weird misunderstanding at work.  The whole passage speaks of how women should cover their hair as it is only for viewing in private and they should not be in sight of the Lord with an uncovered head.  Now, our girl is in her bedroom, but hang about, we’re all looking at her and her fiery hair, and we’re not all married to her, surely?  Personally, I think Mr Brakespeare took the opportunity to justify the painting of a pretty girl by dressing it up with a bit of religion, or ‘Bible Boobs’ as I like to think of it.
If you fancy a bit of Victorian sculpture, you’ll love the utterly gorgeous Cleopatra by Eugenio Lombardi.  Nice asp.  A stunning plinth with Egyptian detail holds a marvellously jagged torso of the queen, together with delicate snake wrapped around her upper arm.  She seems to look at it almost lovingly.  Ouch.  A handily placed bench means you can sit next to her and have a good look at both her and the unintentionally humorous Foolish Virgin by Ercole Rosa.   Oh dear, it’s all gone a bit wrong, I’ve been very foolish, mainly by forgetting my oil.  Oh, and my clothes. Damn, no bridegroom for me...
I’ve always been a bit of a fan of Byam Shaw, and Russell-Cotes is home to an amazing work entitled Jezebel.
However, this russet saucepot has a fabulous hidden secret.  When Byam Shaw painted her, she was naked!  Gasp etc! But sadly he couldn’t shift her without a bit of window dressing, so on went the floaty blouse.  Through the wonders of xray, we can look at Jez’s breasts.  That sounded far less wrong in my head.  Anyway, Ta Dah! 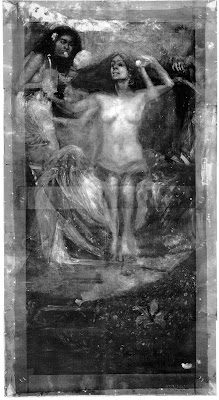 I have no problem with her drapery, I love the colours of the diaphanous clothes she is barely wearing, and don’t feel anything is gained or lost by the alteration.  In fact, it’s a little refreshing not to have the excuse for nudity exploited, especially when the work is put in context with a room full of excuses for nakedness.
Going through to the next room, you will find the following case: 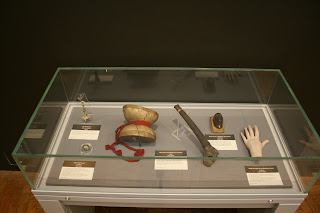 The little pink appendage on the far right is a cast of none other than Lady Hamilton’s left hand.  All comments I could possibly make at this time would be utter filth, so I will move on swiftly, but, really, shame on me.  Giggle. But it is absolutely fascinating because it is so oddly lifelike, unlike the baby limbs at Osborne House on the Isle of Wight.  They look like they are carved from marble.  This looks like a little dainty pink hand. Lady Hamilton's hand.  Sorry, I really need to move on before the sniggering starts again.
A television plays a looped tape of fascinating images of twentieth century body consciousness, from mid-century beauty contest, through adverts and some very graphic images of cosmetic surgery procedures.  We may sneer at the Victorian corsetry, but seeing a needle injecting botox next to a woman’s eye made me wince far more than any amount of whalebone.  The Nineteenth Century Lady may have moved her internal organs around for vanity, yet we insert silicone, in a manner reminiscent of stuffing the Christmas turkey, and inject poison into our bodies. Speaking as someone who had a ‘cosmetic’ procedure last year for medical purposes, why anyone would undertake that level of pain for vanity is far beyond my understanding.  There is nothing quite like seeing our complacent, contemporary ideas next to the dismissed notions of a bygone era to realise how little things change.
It is also a jolly fine chance to see some lovely pictures in a house stuffed with lots of other lovely pictures, so it’s a win/win situation.
The exhibition is on for the rest of the year and the admission charge to the Museum and Art Gallery gets you into the exhibition too.  Go and enjoy, my dears.
Website: http://russell-cotes.bournemouth.gov.uk/
Posted by Kirsty Stonell Walker at 22:51