My last entry got a bit weird, so I determined to regain your trust with a lighter, less peculiar piece today.  Today I want to talk to you about teenage girls, sex and great big scythes.
You will all be familiar with Millais’ apple blossom-y fabulous Spring.
I was looking at this recently while reading about Sophie Caird, and thought how ‘on the edge’ it seemed to me, between Millais’ later, saccharine stuff and his more rebellious Pre-Raphaelite output.  Reading the picture from left to right, it’s quite disconcerting to reach madam on the end, staring back.  In fact, put your hand on the screen and block her out, it becomes a completely different picture.  Put her back in and it’s a shock.  I think she may have wandered in from another picture, possibly Ophelia.

Not only is she our picnic-a-go-go girl, but she also seems to have abandoned health and safety and is dangerously close to the scythe, which our young ladies have been using to gather flowers.  Picking isn’t hardcore enough for these lasses, apparently. 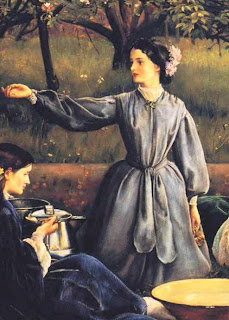 Strangely, the scythe doesn’t seem as out-of-place in the picture as the yellow-dressed girl, mainly because tonally, it blends with the greys of the dresses of the more sensible girls of the party, especially the girl in the centre, whose upright body echoes the blade of the scythe.
So what is the difference between them, what is Millais trying to tell us about the golden girl?
I think there are two different things in play here – the scythe and the difference between the golden girl and her friends, let’s take them one at a time…
When I hear the words ‘Millais’ and ‘golden’ together, I think of this…

The Bridesmaid is about sexual awakening; she has literally let her hair down and is thinking about boys and dodgy-shaped cruets.  Is it just me or is the sugar-shaker a phallic/steeple/religion and sex thing?  Just me?  Let’s move on swiftly…
So we can quite safely suggest that Goldie on the end of Spring is thinking about boys, and is looking out at the predominantly male viewer.  What a saucepot.

To his credit, Millais’ Bridemaid has no judgement attached to it.  There does not seem to be any sort of punishment for her getting all sexy with some cake, unlike the Golden Girl of Spring who seems to be getting a scythe-ing for her trouble.
Hang on, I’m assuming a scythe symbolises death – maybe I’m missing something….
Millais isn’t alone in the ‘young women having a picnic, getting scythed’ genre.  Here we have another in the same vein.
I had to check that all of the children in this are girls, but even the third child from the right with seemingly short, ginger hair is a girl.  Lo and behold, in the middle is a staring girl and she brought her dog too, also staring.  Unlike Spring the girls are all different ages, and to start with I wondered if the older girl on the right was the mother of the child she is holding, but I think they are just an assortment of unmarried girls of varying ages, all maidens if you will.
Interestingly, it isn’t an older girl who stares at us, and unlike Goldie, this girl regards her viewers steadily.  And so does her dog.  She is also wearing a golden-toned jacket, so our eyes are drawn to her, among the darker clothes of her siblings.  None of them pay any attention to the yokel in the background, who appears to be yelling at them, while holding an implement.  I’m guessing it’s a scythe.  Or maybe he’s just pleased to see them.
I’m so sorry.  Let’s move on.
OK, the moment you call the young women ‘maidens’, I go straight to this….
I’m not entirely sure what Death thinks he’s doing, commando crawling over to the girls.  He is so sneaky, hiding in the flowers, and when you least expect it, you’re going to get a good scythe-ing.  My money is on one of the two front girls going first, possibly the one in the golden dress.  Hang on a minute…
So, we have three groups of maidens, three scythes and three golden girls.  In Death and the Maiden, the clue is in the title, he is definitely Death, coming to cut down a young girl like a flower.  One girl and her dog is a little less obvious in its message.  If our stray yokel is Death, then he is separated from them by a low hedge (I would lose all respect for Death if he wasn’t able to climb over that hedge).  The girls in the two pictures have no awareness of what is going to happen, Death could be very near indeed but the young girls are too much in their own little world to notice him.  Even when he’s yelling over a hedge.  Smooth.
Spring is different.  There is no Death, only the scythe, so what if Millais is making a point other than ‘Death will get you at any time!’? The girls pay no attention to the scythe as they have been using it, presumably, to gather the flowers that litter their hair.  The girl on her back, echoes the flowers lying in the basket, so possibly if you think of the flowers as being ‘cut free’ rather than ‘cut’, then possibly the scythe that rests above Goldie has cut her free of her childhood.  She is not involved in the picnic, she is ignoring the bowl of milk or cream being passed to her, and is just staring provocatively out at the men who are looking at her.  Like The Bridesmaid, I don’t think Millais places any undue judgement on her, she is neither good nor bad for her epiphany, she is just different.
So, our lesson today is, unless you’re in a Millais painting, keep a sharp eye out for a man with a scythe, usually either crawling across the ground or yelling behind a hedge.  He should be easy to spot, it’s not like he’s going to swoop down from the sky.

Damn it, I knew I shouldn’t have worn my golden dress today….
Posted by Kirsty Stonell Walker at 15:53