The Wonders of Wightwick

Ahhh, Half Term Week, what better time to visit a splendid National Trust property?  This is exactly what the Walker family did.  We all piled up to Wolverhampton in the sunny Midlands and went to Wightwick Manor.  If you haven’t been and you have the chance, go, go, go, because it is stunning.

I had to be physically restrained.

What I wanted to do was to bring you my super eight pictures (and an object) from Wonderful Wightwick, together with my normal quantity of incessant prattle. 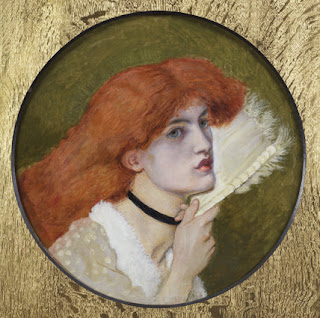 In the Drawing Room, the first room you are shown into, hangs a very odd portrait of Jane Morris, quite unlike any other portrait of her.  She is holding a fan, with a strange ribbon necklace, but more strikingly, she is redhaired.  According to Wightwick, the hair was actually completed by Madox Brown, who they claim was referring to Rossetti’s love for Elizabeth Siddal.  It isn’t unheard of that he would change Jane’s hair colour, she is a redhead in reproductions of Prosepine.  Thinking about it, Jane is the only one of his models whose hair colour he changed radically, which adds to my opinion that Jane was almost not real to him, she is his mystic ideal.  The fact that Jane is holding a fan makes me wonder if this was intended as a portrait of Jane from the beginning or whether he conceived it as a picture of Fanny Cornforth or even Alexa Wilding, who holds a fan in Monna Vanna. 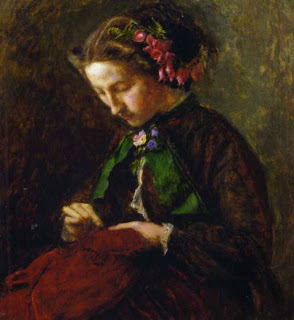 The interpretation of this picture given by Wightwick was very sanitised, which was sweet.  Our guide said that Effie left Ruskin because their marriage didn’t work and then she met Millais… well, hmm, I can see where you’re going with that… I think you can see that Millais is beginning to see Effie in a domestic light, romantic and intimate, with the beautiful pink foxgloves in her hair as she sews.  She is his domestic goddess, at once both mundane and magical, and you can imagine young Millais, up in Scotland, being thrown together with the unhappy wife.  I’m not sure whether Ruskin planned it all, to get her off his hands, whether he just wanted Effie to sleep with Millais so he could get grounds to divorce her, but it was a disaster waiting to happen.  At least Millais and Effie found happiness together when it was all over. 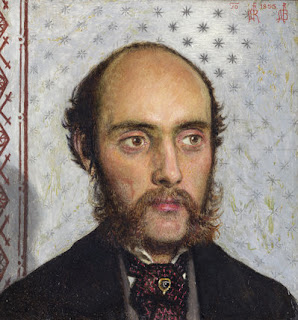 I’m not sure how I feel about William Michael Rossetti.  On the one hand, he provides us with a great deal of information about the formative years of the Pre-Raphaelites and about his brother Dante Gabriel.  He also was called upon to clear up a lot of his brother’s messes and mistakes, providing money and decisions about things he shouldn’t have had to.  However, I also see him as part of the eternal infantilising of Dante Gabriel, forever keeping him a dependent child who would always be bailed out, to the point where William took some decisions from which Rossetti could not retreat.  His last trip to Birchington, keeping Fanny from him during his illness and death, and his treatment of Fanny after 1882 all give me a feeling of disquiet about this seemingly pleasant, clever man.  If I am fair, I think Dante Gabriel’s behaviour often did not bring out the best in people, and if he was high-handed in his brother’s life, it’s only because he had to be.  I still don’t like him though.  Sorry, William Michael. 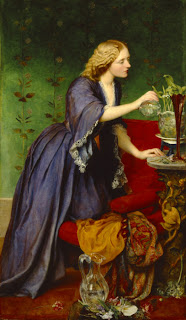 This picture is luscious.  There is no other word for the richness of the colours, the red, green, purple and gold that make up the picture of a woman pouring water into a plant pot.  I love the crimped waves of her flaxen hair, which reminds me a lot of Annie Miller for some reason.  I love the delicate leave motifs on the emerald green wall paper, offset by the ruby red chair on which she kneels in her amethyst dress.  I was surprised when I found out it was by Watts, who I usually think of as being more impressionistic in his handling of paint, and this is beautifully delicate and clear.  Mrs Nassau seems to be a fairy-like little lady, but she was made of stern stuff, the first female Civil Servant in Whitehall and co-founder of the British Red Cross.
5. Love Among the Ruins (1894) Edward Burne-Jones 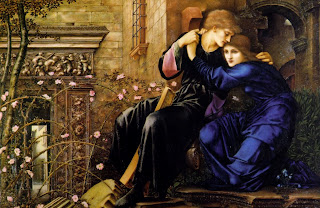 Talking of gorgeous, at the other end of The Great Parlour (God, I wish I had a Great Parlour, or even a Parlour of any sort) hangs this giant slice of deliciousness.  Mr Walker commented on its resemblance to the Briar Rose sequence at Buscot Park, with the tangle of roses encroaching on the couple.  In the booklet on sale in the National Trust shop, there is the following quote from Burne-Jones: a picture is a romantic dream of something that never was and never could be.  The picture was completed at the same time as Burne-Jones was ending his destructive affair with the model, Maria Zambaco, so it is tempting to read a great deal into the work.  Maybe Burne-Jones was alluding to the damage their relationship had caused to everyone; he and Maria pursued their love despite the devastation it caused.  I have questions about the strange object or piece of debris that points up between the man’s legs, but I’m too much of a lady to talk about it. 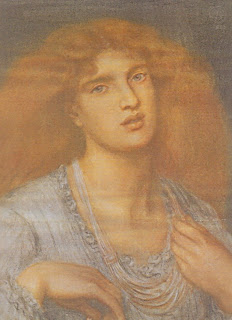 Here is a Rossetti that I had not seen before.  In the April 2011 Burlington Magazine article on the new pictures in Wightwick, it is suggested that this is a portrait of Annie Miller, but she is wearing no wedding ring and she was married by 1867.  I wonder if it is another experiment in changing Jane Morris’ hair colour, as Jane holds a pink in her hand in The Blue Silk Dress.  It could of course be just another Stunner, for example the cook who was the original model for Venus Verticordia... 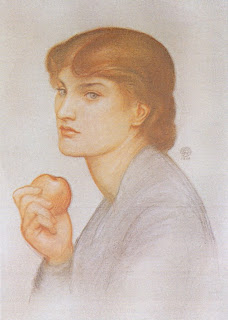 Similarly, I was over excited to see this (really, I frightened the room warden) as I had never seen it before.  This is very new at Wightwick, and is not illustrated anywhere on the internet at all, so I was very pleased to see it in the article in April’s Burlington Magazine (la de dah).  Given the date, 1866, Rossetti was beginning to use Alexa for Venus Verticordia and I think this picture may allude to that.  It’s obviously not a sketch for the picture, but may be a portrait referencing her new role.  I’ve said it before and I’ll say it again, Rossetti rocked chalk. 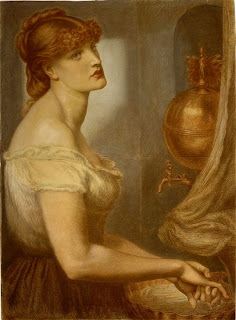 This is fabulous – you get to see the actual samovar used in La Bella Mano (1875) and it looks just like the golden snitch. Words fail me as to how amazing it is to be stood next to a mad looking tea urn that Rossetti had been stood next to. Excuse me while I swoon.

So, ladies and gentlemen, that is my guide to some of the pretties of Wightwick, but to be honest you cannot look anywhere in that house without spotting something that takes your breath away.

A little piece of heaven on earth.
Posted by Kirsty Stonell Walker at 20:56