Although today's subject is grim and familiar, I rather love the story of how it came about, not to mention how amazing the artist who used it as inspiration was. It all started when Robert Browning found an interesting second-hand book and ended up with this piece of art...

Robert Browning's 1868 verse novel The Ring and the Book, tells the sad and true-life tale of Pompilia and her murder at the hands of her jealous husband, Count Guido Franceschini in 1698.  Browning found a battered old account of the affair in a flea market in Florence in 1860, in a book which became known as The Old Yellow Book (which you can read for free here). Here is a short version of the sorry tale...

The lovely Pompilia was married off to Guido (who was wealthy) by her frankly awful parents, Pietro and Violante. The understanding was that Guido was not only marrying Pompilia, he was also taking on the awful parents, to whom he gave money.  Pietro and Violante were appalling house guests, rude and presumptuous, and all of Guido's family loathed them.  When they expressed a wish to return home, Guido happily refurnished their home and gave them more money to leave.  Which of us hasn't had visitors whom we'd happily pay to just sod off?  Anyway, once home, the appalling parents decided to tell everyone that poor Pompilia wasn't actually their daughter and therefore they didn't have to pay any sort of dowry to Guido.  They also went around saying rude things about Guido and his family. Honestly, we will see some terrible people this Blogvent, but Pompilia's parents are contenders for the absolute worst.

Anyway, Guido's family were rightfully hacked off because gossip in seventeenth century Italy was a serious matter as reputation was everything. However, they apparently sought a legal end to it all, especially as Pompilia was apparently not the child of the appalling parents.  Guido's family got angrier and Pietro and Violante became more obnoxious (if possible) and so Pompilia took her chance and made a run for it with an understanding priest, Canon Caponsacchi, and the contents of her jewellery box.  Guido caught up with them but Pompilia pulled a sword on him, so he had her arrested.

Pompilia was sent to a nunnery before her trial but was found to be pregnant, at which point the nuns sent her home to her awful parents.  She gave birth to a son and her parents were loud and obnoxious about that as well, so Guido went to their home and killed them all.  He was arrested and sentenced to death.  He applied to the Pope for lenience on the grounds that he was rich and his victims were appalling and bougie, but Guido was refused and was executed. The End.

Browning made his verse book a serious of testimonies, each an account of the story, including that of the dying Pompilia, and Guido's prison thoughts.  It became possibly his best selling and known work, commenting on the roles of men and women, morality and justice in society, both ancient and modern.  So, what was a sculptor doing with it almost forty years later?

There is a brilliant piece on Edith Downing on ArtUK.  Edith combined a career as a sculptor with being an active suffragette, gaining a hunger strike medal, which is a grim reminder of how far women went in order to gain us the vote.  I've been thinking a lot about the actions of the suffragettes recently, what with the Climate Protesters and as inconvenient, abrupt and messy the soup flinging and roading blocking is, blowing stuff up and slashing the Rokeby Venus was even more shocking.

The choice of Pompilia as a subject is an interesting one.  While I think the poem is sympathetic to the poor girl, giving her dying words a section on their own, the Othello-like tale would have been viewed as a wronged man gone mad in a bad set of circumstances by contemporary audiences.  The plight of Pompilia, used as a gambling chip by her awful parents, then blamed for their awfulness by her in laws before being killed, speaks of the plight of women as objects.  The pride of men is a dangerous thing, a murderous thing - in the Old Yellow Book text of the original story, a lot of emphasis is placed on how enraged Guido and his family become when they are laughed at.  The love letters between Pompilia and her lover-priest are laughed out of court as Pompilia couldn't write, and the frankly awful parents go around town mocking Guido for basically being duped into marriage without a dowry. 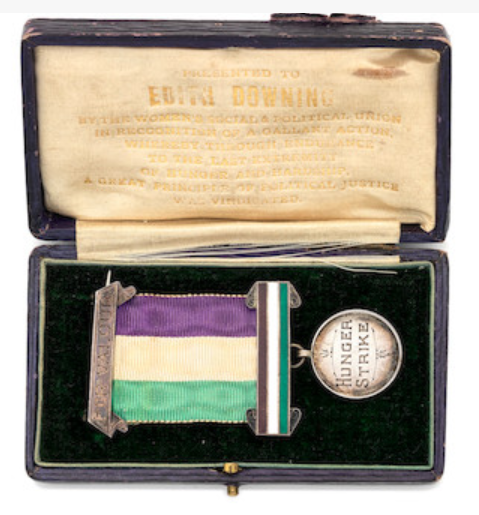 For Edith Downing, Pompilia is a saint.  She is presented like the Virgin with child, her crown hovering above her. She almost steps from the carving whilst behind her the mute figures of her story watch - from the left stand her mother, the priest, her father, then lower, on the right, the figure of Guido, his face judgemental and thoughtful.  If you had asked any of Edith's contemporaries (or in fact Wikipedia's page on the poem)who the main character of the story is, they would have probably said Guido, the 'wronged' husband (okay, so Pompilia probably didn't have it away with the priests but he got saddled with appalling in laws).  Downing makes Pompilia the centre of the whole thing, a three-dimensional woman cradling a baby about to be killed by a humiliated man, whom she had tried to escape. Within a decade of this piece, Edith had changed from art to action, smashing windows, including one of an art dealer in Regent's Street in 1912.  This is what she was sent to Holloway Prison for and where she staged her hunger strike that earned her the medal above.

I'm pleased that Edith saw women receive the vote within her lifetime.  After her death in 1931, Pompilia was given to the first women's halls of residence at the University of London where it still stands in Senate House.

Posted by Kirsty Stonell Walker at 10:12