If you have read my novel We Are Villains All, then you might recognize this illustration...

Whilst I used it to symbolise the murderous nature of one of my characters, you will be shocked to learn that it was not drawn especially for me but for a 1905 book of nocturnal wildlife stories called Creatures of the Night by headmaster and nature writer Alfred Wellesley Rees (1872-1917).  This is a very beautiful book indeed... 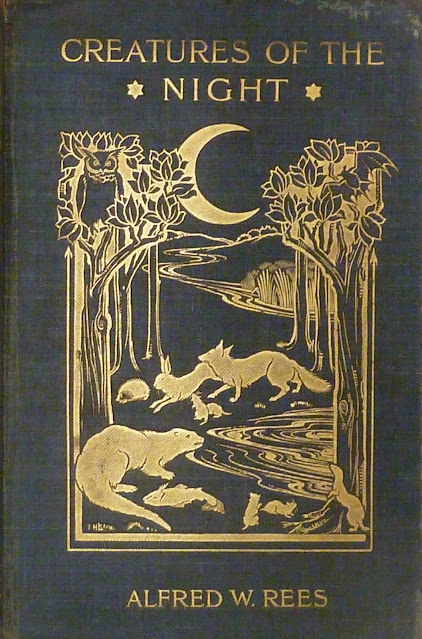 No offence to the late Mr Rees but what makes the book extra special are the illustrations, and they are by Florence H Laverock, a now forgotten artist who I must thank for the most perfect illustration for my story of fox mask-clad shenanigans and gruesome murder.
Florence Hilda Laverock was born in the spring of 1879. Her parents, John and Evangelina were married in 1875, and Florence was the middle of three daughters, Mary (born 1877) and Eva, who followed Florence in 1883. John was a tailor in Warrington, which is sort of between Liverpool and Manchester. The family lived in a modestly little house in Suez Street and life seems to have been pretty settled. However, before the girls were even into their teens properly, tragedy struck. Newspaper reports of John's sudden death at only 39 years old were quite vague on the details.  He had been found one evening after work, just inside his garden gate, dead.  It wasn't until the inquest that the sad truth came out.  On returning to his home at the beginning of May 1890, John had entered his garden then somehow tripped, possibly banging his head as he fell.  Unfortunately, although the blow was not serious it was enough to stun him, and he fell against something that covered his nose and mouth.  This suffocated him.  It was a freak accident but left Evangelina as a young widow with three daughters to care for.
Luckily, either Evangelina was good with the thousand pounds her husband left her, or her family stepped in to assist as by the 1891 census, the Laverocks were in a slightly different part of Warrington.  Evangelina's family, the Silcocks, lived near and had their own servant, so I'm guessing the family wasn't too badly off which is why Mary, the eldest daughter became a cookery teacher in 1901, lecturing down in Kent, while Florence became an art student at the Liverpool School of Art from 1895 onwards.
Almost immediately, the newspaper began to praise Florence's work.  In 1901, the Liverpool Daily Post commented on 7 colour prints of the Days of the Week which they called 'quaint and clever'.  She also produced a frieze which was 'sweet and cheery' and had been 'stencilled with great judgement'.
In 1902. she created the cover and title page of Arthur Bennett's Sunrise Songs... 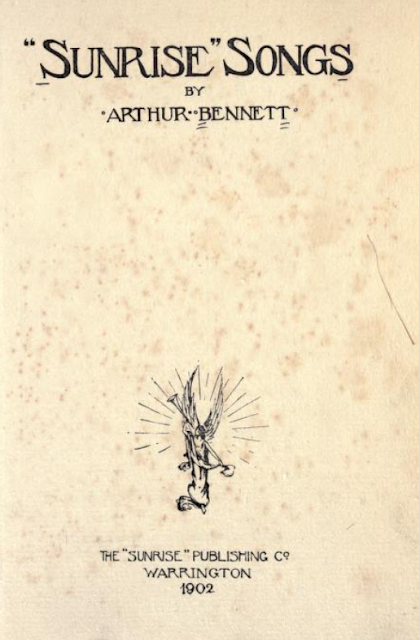 1905 not only saw the publication of Creatures of the Night but also an embroidered and applique hand screen (apparently not a fan, I suppose the difference is that you don't wave it about) which received praise in the Studio journal.  Her work appeared there quite regularly, with her designs for wall friezes and other home items, which led to her being included in the 1906 book The Modern Home: A Book of British Domestic Architecture for Moderate Incomes, which is a very precise title indeed. Even better, her design for a dressmaker's showroom appeared in the companion volume, Flats, Urban Houses and Cottage Homes...
All the while, alongside her illustration and home-design pieces, Florence was still producing little gems of whimsical art such as Country Cousins (1906)...
By 1911, All the daughters were living back with their mother on Victoria Road in Grappenhall in Warrington, which looks very nice indeed.  Only Florence is listed as having an occupation, and she is an art mistress at a girl's school. By 1921, she is living in Toxteth in Liverpool, possibly with sister Mary, and youngest sister Eva married Arthur Gibson.  Their mother, Evangelina actually lived on until 1933, forty years after her husband smothered himself by accident, having moved down to be near Eva and Arthur in Wales.
In the meantime, Florence and Mary had adventures in a quiet way.  Florence became the teacher of drawing at the University of Liverpool in 1924 until 1944, but actually taught her students a vast array of different techniques, as one of her students remembered. They treasured their drawings, lino-cuts and woven scarf that they had created under her watch. Florence worked at the Belvedere High School (now the Belvedere Academy) for 35 years, finally retiring in 1939. She was fondly remembered as both a teacher of art and dancing and also an esteemed artist, whom they were proud and her departure was written up in the newspapers. She and Mary retired to Bretton Village in Wales to live with Eva and Arthur but in the 1939 England and Wales register, Florence is still listed as a University Lecturer as she kept on the work in Liverpool, even though the students had to be evacuated out of the city to Harlech. She and Mary moved to Lrw Fair Llanfair in North Wales where she died in the Autumn of 1948, leaving her £8000 legacy to Mary.
All very worthy and quiet, which reflects a few of the women whose artist lives and legacy we look at here, but there is a little piece of Florence and Mary's lives I'd love to know more about. At least twice in their lives, in the 1930s, they went off on adventures. In the Autumn of 1933, they sailed to Marseilles and returned the following year.  What did they get up to?  Was it art related?  I am very much reminded of my maiden aunt's photo collection I received after she died.  As far as I knew, my Auntie Joan had lived a quiet life in a small Wiltshire village, but there she was in front of the Eiffel Tower.  I was delighted.
Florence H Laverock's illustrations for Creatures of the Night are included in the exhibition I have curated for the Russell-Cotes Art Gallery, entitled 'Telling Tales' which opens tomorrow.

Posted by Kirsty Stonell Walker at 14:57