Review: How We Might Live: At Home with Jane and William Morris

There is an absolute joy in wallowing in a wonderful new book, meeting old friends and seeing things in a different light, which is why I have been eagerly awaiting the publication of Suzanne Fagence Cooper's new biography of William and Jane Morris, How We Might Live... 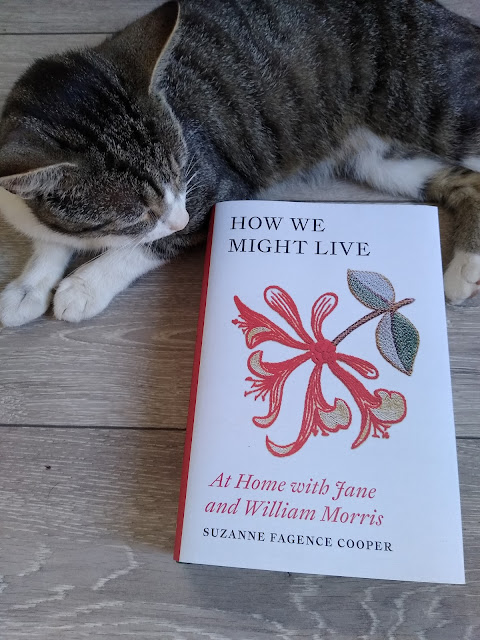 You might think that as a couple neither of the Morrises are exactly short on biography, but what has been missing, arguably, is seeing them as a functioning couple. Indeed, one thing we have been told over the years is exactly the opposite, that they did not love each other, both were miserable - he was bullish and she was sulky. I've always been #TeamWilliam, mainly because biography of Fanny tended to be lost in the gushing over Jane that started almost as soon as Rossetti died. However, if we have learned anything, then it is definitely to not believe a damn word anyone else tells you about a person if they have a blatant ulterior  motive (Yes, I'm looking at you, Hall Caine).

Also, yesterday afternoon about 5pm, I suddenly realised that William Morris was autistic. Yes, I will back that up, but let's crack on...

There are many reasons why I absolutely loved this book, but I'll start with just how enjoyable it is to read. The tone is friendly, packed with knowledge and easy to read. The Morrises are referred to as William and Jane, which immediately invests you in their lives,and their world is where we will be for a mighty 536 pages. While I am sure by now we know that Jane was not just the passive observer of her own life, I was still surprised by her laughter, which was 'unforgettable' and exactly how active she was in the creation and management of her life, art and legacy. It is also shocking to see how the interpretation of others is still taken as gospel when it comes to how she felt about the men in her life, but I'll come to how much I want to slap Wilfrid Scawen Blunt in a bit (You can also read about how much I loathe him here). This book takes us through their lives, step by step so you can see the journey, understand the steps they took and appreciate for yourself that Jane and William Morris were extraordinary for so many reasons, but utterly relatable in ways that we just don't give them credit for.

Starting with William, he had read all of Walter Scott by 7 years old, which is incredible, but that wasn't the most interesting thing I took away. As a child, he preferred the calm of girls to the rough and tumble of boys. His vivid memories of childhood involve sensory recall - 'To this day, when I smell a may-tree I think of going to bed by daylight.' His intellect, his tempers and melt downs that involved beating his own head and destroying work, the social difficulties, inability to full acknowledge the needs of others above his singlemindedness, his endless energy on his own projects and even the curious way he walked, all discussed in the book, lead me to believe that William was on the autism spectrum, which is something I hadn't really considered until now. The comorbidity of autism with epilepsy might also provide an explanation of Jenny's condition, but beyond that, understanding the neurodivergence of such a familiar figure gives such a different view of their life. As someone on the spectrum myself, I also absolutely loved the sensory nature of the book - the smell of things, the feel and sound of fabric - which is so evocative of place and person that it is impossible not to immerse yourself. I also liked the placing of Morris in time - the detail that he was taking his entrance exams in 1852 just as the Pre-Raphaelites were gathering momentum gives you context to see what he would be entering into in a matter of years.

But what of Jane? There is a silence over Jane's life before that fateful meeting with the artists in the theatre, and as frustrating as that is, it is also part of the story, as it was orchestrated and controlled by Jane herself. It is interesting to see the contrast between William and his good friend Edward Burne-Jones in terms of wealth, but it is another step again for Jane. She appears from the streets of Oxford, from too-small rooms, outbreaks of cholera and little money, to become a queen for a group of young men, one of whom had his own suit of armour and pony as a child. And she married him.

The Morris marriage will always be a matter for discussion, mainly because of the lack of scandal it seems to have generated. What I appreciated in How We Might Live is acknowledging the difficulty in Jane's position as well as William's. I think it is well past time we stopped romanticising Rossetti's obsession with Jane and discuss how much his mental illness impacted all their lives. That is not to say that she did not love him, and they did not have an affair, but the nature of their affair, William's escape to Iceland and Rossetti's own behaviour need to be looked at without rose-tinted glasses, which I think is done accurately here. It is also a joy to read an account of William being beloved by his family, being the storyteller, the craftsman, the adventurer, not just the cuckold to Rossetti's Casanova.  It's impossible not to see who comes out of this the happier man with the better life and it is refreshing not to see obsession romanticised. We possibly need to be reminded on a regular basis that the Jane who exists on Rossetti's canvas is his invention and beyond her control. Which leads me to a huge part of the story...

How do we know that William and Jane Morris had a miserable marriage? Because Wilfrid Scawen Blunt said she told him so.  This is the same man who slept with Jane in order to feel closer to Rossetti so I'm happy to ignore his nonsense, thank you very much, however this does raise an interesting point.  William Morris was an Eminent Victorian (TM) and so much written about.  The couple's friends and admirers were not backward in writing their views on both him and her and so what we end up with is a tapestry of other people's opinions, much of which if we think about it, is unrealistic and missing the point that both Jane and William were human beings, able to experience dodgy marriage spells, mid-life crisis and attraction to other people without it completely defining their entire lives. We can possibly say that there were times in the Morris marriage which were not happy, but that does not equate to an unhappy marriage. On the contrary, throughout even the unhappy patches of their marriage, the couple care about each other - when Morris escapes to Iceland, Jane frets that she has not heard from him. How We Might Live shows us that it is possible to love two people at the same time and that not all love is the same. It's interesting that even though the Burne-Jones marriage takes many turns no-one ever claims that they were miserable and had a loveless marriage. Is the difference Rossetti?

We follow the Morris family from place to place, experiencing their lives in that time and place, until we end up at Kelmscott at the end of Jane's life. Her obituary acknowledged that 'only her intimate friends knew the kindliness, the good sense and the girlish love of fun, which remained until the end of her life.' This nod towards the myth making that both Jane and William suffered from is backed up by a visit to the elderly Jane by the poet Richard Le Gallienne who could not cope with being given a jar of homemade jam by the goddess of Rossetti's imagining.  This brought me right back to a similar statement from Swinburne after Morris proposed marriage to Jane, over half a century before - 'The idea of marrying her is insane. To kiss her feet is the utmost men should dream of doing.'

The blessing of How We Might Live is that it takes us through the stages of a marriage and of two lives with such precision that you can absolutely see the myths obscuring the truths. It seems a shame that we should have to be so vigorously reminded that the Morrises had an extraordinary life together, for all the challenges and sorrows. Jane left origins of poverty and found life experiences that would have been well beyond her grasp.  She had influence and impact that mean we feel we know her over a century after her death. The book is a marvel for the senses, from the smell of jasmine and the feel of silk to the taste of hot pot and marmalade, both of which are included in the recipes passed from Jane to May Morris. This is a warm hug of a book, filled with wisdom and heart, and as William Morris would say 'O my word! So very, very gorgeous!'

How We Might Live is available now from all fine bookshops and from the publisher.

Posted by Kirsty Stonell Walker at 13:49