A bit of a holy grail for me is Julia Margaret Cameron's lost image of Christina Rossetti.  We know that Cameron managed to capture an image of the poet as 'Christina Rossetti, profile' is listed on the lid of a negative box.  Whether or not that particular negative or any resultant images survived is another matter.  Questions immediately arise - how would Cameron portray Christina?  Would it be a gravitas-packed image, like those of Tennyson or Browning, or something lighter, prettier, like those of Anny Thackeray?


Whilst pursuing Miss Rossetti, we have at least the photographs Cameron took of her brother, William Michael, taken in 1865, and in a similar vein to Browning and Tennyson (definitely the same hat)...


The one Rossetti who escaped her lens was the one she chased the hardest and with whom, arguably she had the most in common.   Julia Margaret Cameron met the Rossetti family when they were drawn into the orbit of Little Holland House in 1856.  The person who had taken him there was fellow Pre-Raphaelite brother, William Holman Hunt. Cameron took Hunt's photograph and his influence in her work is clear from works such as Pre-Raphaelite Study (1870).


On paper, Dante Gabriel Rossetti and Julia Margaret Cameron seemed to be kindred spirits.  Both had translated the Gottfried Burger poem 'Lenore', Cameron in 1847, three years after Rossetti's, and both had dedicated great time and effort into illustrations for collections of Tennyson's poetry.  When significant people in their lives had died prematurely, both had reacted creatively, capturing their deaths in striking artistic pieces, Rossetti with Beata Beatrix and Cameron with the post-mortem photographs of Adeline Clogstoun.  Yet, Rossetti resisted, despite profiting from the acquaintance, and Cameron found it difficult to cease her pursuit.


Rossetti had a well-established relationship with photography.  He welcomed Cameron's friend and rival Lewis Carroll in to his home and garden to capture his family (including modest sister Christina in some of the most beautiful portraits you'll see of her), not to mention the epic cycle of photographs of Jane Morris, taken by John Parsons under the direction of Rossetti.  However, his relationship with Mrs Cameron seems to have a double edge to it, in turns warm and retreating, yet undeniably influential. 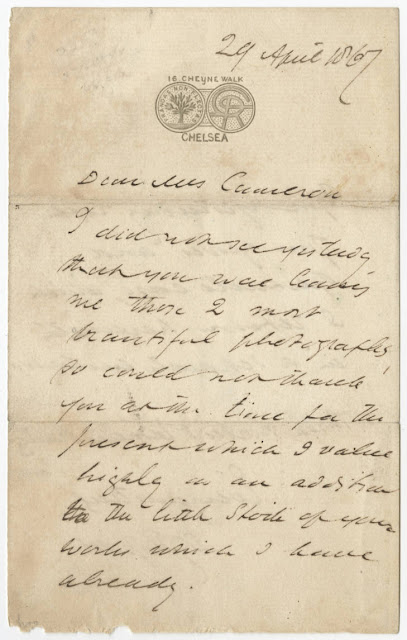 On the face of it, Rossetti wrote letters to Mrs Cameron filled with friendship and admiration. He writes of her 'beautiful photographs', praising The Kiss of Peace as being 'a most lovely thing' and that one of her photographs was like 'a Lionardo' (sic). It is, of course, possible that the miss spelling is not a coincidence and he was mocking her, but I don't get that impression from the rest of their lettes. She gave him photographs and he allowed her to borrow photographs of his paintings.


I think a very interesting aspect of their relationship is that they had such a wide group of shared friends and even people I wouldn't immediately connect with Rossetti were part of the Society that both artists moved in, mostly centred around Tennyson or Little Holland House.  When Rossetti was sent a copy of The Rosebud Garden of Girls as a 'kind present' he was 'half ashamed to accept', he described it as 'full of beauty'.  He writes Nellie and Christina (on the left) would 'bear away the palm' (of beauty), but that the photographer 'is not always a trustworthy reporter', which is an interesting comment because you would think the camera would be trusted (before Photoshop, anyway).  It could have been that Rossetti felt there was no difference between painting and photography in terms of art form and its ability to express and enhance beauty.


Cameron was always a generous friend, a thing that embarrassed people as much as endeared her to them.  She gave Rossetti not only photographs but also an illustrated copy of Edwin the Fair and Philip Van Artevelde by her friend and model Henry Taylor.  There is some disagreement over how many of Cameron's images Rossetti owned, but there are initially seven that Cameron herself gave to Rossetti as presents in 1867, a year after they seem to have started a correspondence.  They are:


Ophelia is the most immediately 'pre-raphaelite' subject, and Rossetti's copy had the following dedication written on it - 'For Dante Gabriel Rossetti with my best remembrance, Julia Margaret Cameron.' The image of Mary Pinnock reminds me of images of Elizabeth Siddal, and the strong focus of the woman without any narrative (the title is almost superfluous, different from the far more dramatic rendering of the subject featuring Emily Peacock) brings to mind Rossetti's 'beauties' of the 1860s.


This photograph of the model Cyllena Wilson is one of three images that Cameron gave to Rossetti of the girl.  This one is entitled 'Rosealba', referring to the white rose on her dress.  Another a straight portrait of Cyllena.


Rossetti referred to this picture of 'Selina', probably because he heard the photograph's subject referred to before seeing her name written down.  I am unsurprised that Rossetti liked the images and Mrs Cameron was extremely shrewd to choose Cyllena for her gift to Rossetti as the girl is very much like Fanny Cornforth in her broad open face and long flowing hair.  She was also an adventurous soul, but we'll talk about that next month.

The most awkward of the portraits of Cyllena is this one, and you have to have pity on girl having to pose for goodness knows how long with that vase on her head.


A curious inclusion in the collection are the images of children, firstly this one of Kate Keown and the next of Freddy Gould.


This two young models are interesting inclusions in the gift as Rossetti is not known for his interest or inclusion of children in his art.  On the surface I suppose Cameron might have been thinking of the angelic figure in Rossetti's  The Girlhood of Mary Virgin (1849), which I can definitely imagine Cameron being influenced and inspired by, but children were never part of Rossetti's artistic vision.

The final image of the set given to Rossetti by Cameron was another image of young Kate Keown, but she appears to be playing the part of a little stunner in a pose that is very reminiscent of The Blue Bower of a year earlier.  Even though Mignon is from a session entitled The Minstrel Group (which included both Mary Ryan and Elizabeth Keown as well as Kate), it is only the single figure, posed with a musical instrument that Cameron sends to Rossetti.  It might have been entirely accidental but she appears to have sent him a virginal version of The Blue Bower, just as Rossetti's art was turning from the obvious charms of Fanny Cornforth to the untouchable icy beauty of Alexa Wilding.


Rossetti also received other photographs from Mrs Cameron.  For the portrayal of ancient philosopher Hypatia, Cameron chose Marie Spartali.  A decade later, Spartali would appear in Rossetti's A Vision of Fiammetta, but in 1867 she was an aspiring painter, learning her craft under Ford Madox Brown (just as Rossetti had, sort of) and posing for her Isle of Wight friend, Cameron.  The dress with the criss-cross pattern used in Cameron's photographs reminds me of both Burne-Jones' Sidonia Von Bork 1560 (1860) and Frank Cadogan Cowper's Vanity (1907).  Spartali was also a recipient of Mrs Cameron's famous generosity; in a letter from 1869, Rossetti tells Cameron he will pass a copy of The Kiss of Peace to Spartali when he sees her, a photograph Rossetti considers a 'masterpiece'.


Beyond the images Rossetti owned (and by his death it is rumoured he owned up to 41 of her prints), the couple shared inspiration.  Many people have commented on the similarities between 'Call, I Follow, I Follow, Let Me Die!' and Beata Beatrix, which were hanged together in a recent exhibition, but exactly who drew inspiration from whom is unclear.  Certainly, Cameron's photograph predates Rossetti's finished oil but his sketches of The Return of Tibullus to Delia, which prefigure Beata Beatrix date from the mid 1850s. I have read people argue the matter both ways - that Cameron saw Beata Beatrix on a visit to Rossetti's studio and that Rossetti received a copy of Cameron's print.


Beyond the purely visual, Cameron found inspiration in the poetry of the Rossetti siblings, starting with the aforementioned Minstrel group, which she based on Christina Rossetti's 'Advent'...


It's not the most obvious tribute to Rossetti's poem and had Cameron not inscribed some prints with 'We sing a slow contented song / and knock at paradise' the connection might not have been made.  I do wonder if sometimes Cameron just named a photo on a whim after the fact, but Mary Ryan and the Keown girls are supposedly the 'patient virgins wise' of the poem.


On more intentional ground, we have Marion 'Pinkie' Ritchie as the Blessed Damozel of Dante Gabriel Rossetti's poem.  It is a beautiful and lesser known of Cameron's photographs and makes the lovely Miss Ritchie look absolutely delightful.  I particularly love the fact that her 'stars' appear to be flowers, and this portrait is softer than others of her as Mary Queen of Scots.  I rather like Pinkie and will be returning to her next month.


Cameron's image of Mnemosyne, the goddess of memory, predates Rossetti's by over a decade and some argue that Rossetti may have been inspired by her image, which was in his collection of prints, although far more likely is that it is a repeat of Astarte Syriaca.


The real question becomes why did Rossetti resist the relationship with Cameron?  Whilst staying with their mutual friend William Allingham in 1868, down in the New Forest, Rossetti writes that he wants to walk by the seaside, with no 'impending female photographers or even poet laureates'.  When Cameron sent Allingham several insistent notes to come and sit for her, bringing Rossetti with him, Rossetti replied with a equally insistent 'no'.  It's not a secret that Cameron could be rather overwhelming and although the pair seemed to respect each other as artists, possibly in later life, Rossetti did not feel comfortable being a model for Cameron.  Thinking about it, I'm not even sure Rossetti had modelled for any female artists after Elizabeth Siddal, and we have proof that he felt uncomfortable about portraits taken of him after her death.  It is just as likely that the refusal from Rossetti was as much about his feelings about his own image as his feelings about the photographer.  Either way, it probably didn't do Cameron any harm to be told 'no' now and then, despite depriving us of what would undoubtedly be an interesting portrait of a conflicted, brilliant artist.

I still remain hopeful that Christina's photo will appear at some point, I best go and check the attic again...
Posted by Kirsty Stonell Walker at 04:59