It's so dark this morning, it's ridiculous.  Roll on the shortest day because although I'm not a fan of the summer, I would appreciate actually seeing some daylight somewhen soon.  As it is, I shall have to suffer in the dark for a while longer, but in the meantime, here is today's painting...


We've arrived at the main event, much like the shepherds here - it's the nativity!  We have choirs of angels, a baby and a bunch of well-wishers all turning up with gifts to welcome the baby.  Actually, having had a baby in December, this is pretty much what it looks like when you have a baby around Christmas.  Only we didn't have a choir of actual angels, there were less cows in our front room and well-wishers tend to turn up with Boots vouchers rather than lambs.  Otherwise, it's spot on.


I like the fact the angels are up in the rafters, it's so sweet.  There is always a problem what you do with the angels in the nativity set.  The Playmobil one we have is fine as she can stand up, but with my French set, you have to either lean 'Gloria' as she is called against something or (as we used to do when I was a child) blue-tac them rather unceremoniously to the stable.  It's nice to have them tucked out of the way in a sort of heavenly-shelf affair, it reminds me of old paintings where the cherubs look down from clouds.


May, Joseph and the little Baby Jesus are at the back in the stall, with a very nice potted plant.  The lily is a tad incongruous but for symbolism sake we have to put up with it.  I think a mini-fridge would have been more welcome by the holy family but I guess they just have to lump it.  Joseph looks very decrepit in this one, more like Mary's Grandpa than her boyfriend, but we'll gloss over that...


The well-wishers I suppose are the shepherds as they don't look much like Three Kings.  And look!  There is even a lady shepherd complete with baby strapped to her back. I never really gave any thought to the gender of the shepherds but there is no reason that even if they were chaps they couldn't have turned up with their good lady wives.  Everyone needs an excuse to get out of the house at Christmas.


There's always one, isn't there?  Who turns up to see a new born baby with a set of bagpipes?  Plus, is he in a kilt? I think I can see a bit of tartan, but I might be mistaken.  Either way, turning up with bagpipes is possibly the worst idea ever, even if that is the son of God and probably has a nice sleep pattern all sorted out already. 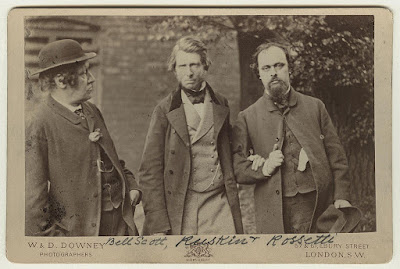 You know William Bell Scott; he's the third wheel in the photo of Rossetti and Ruskin above, and the brains behind the nut-spitting story to do with Fanny Cornforth.  Swine.  It all began with Fanny loudly pointing out that she didn't recognise him at a dinner party as he'd lost his hair while ill.  He is obviously a man who doesn't forgive as he made up that story presumably to get his own back.

William Bell Scott (1811-90) was a painter and poet from Edinburgh and taught art in London and Newcastle upon Tyne.  He's probably best known for his depictions of the new industrial landscape and processes as well as more traditional subjects such as Biblical and literary scenes.


He had an unusual private life, running some sort of menage a trois with one of his pupils, up in Penkill Castle and back at his home in London.  For someone with such a flexible approach to private life, he seems to have been quite judgmental in the case of his handling of Fanny but in that he was not alone, showing how hypocritical they were.  His art is now largely unknown, despite residing in major collections and being of interesting and unusual subjects.  Iron and Coal for example is unusual, bearing a comparison to Work by Ford Madox Brown in the treatment of heroic-looking workmen.  His nativity is both traditional in setting but the emphasis on the shepherds, the working men, is a change and makes it a different and somehow more realistic depiction of the scene.

Apart from the bagpipes, obviously.

See you tomorrow...
Posted by Kirsty Stonell Walker at 14:22