I love when marvellous, unexpected things come in to my life and that is just what happened to me when I was last in Birmingham for the Pre-Raphaelite Society AGM.  I nipped into the Birmingham Art Gallery shop and picked up what I thought at first was a calendar, but turned out to be something much more magical. I bought it immediately... 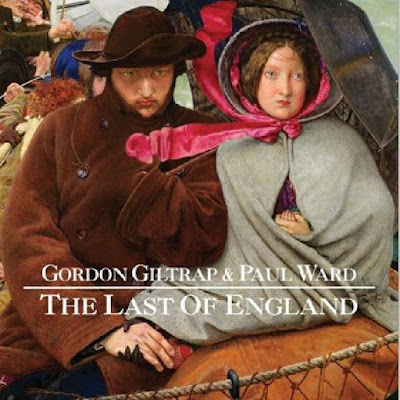 Available to buy on both CD and vinyl (obviously I bought vinyl, and it's orange vinyl to boot!), this album is inspired by Pre-Raphaelite art works, from the title track, though April Love, Work and The Light of the World.  I was familiar with Gordon's work beforehand, but for those who have not yet had the pleasure, his work is beautiful instrumental pieces, with his guitar telling sound-stories which perfectly match the paintings and the mood of the album.  From the rolling tide of 'The Last of England', and the lazy wamth of 'All the Days in May', through the unexpected strength and industry of 'Work'.

I love Gordon's music as it is so distinctive and beautiful, and this is a brilliant album, bringing a further dimension to the paintings, an interpretation though emotion rather than words.  I think the title track is my favourite but 'Work' really caught my imagination too with the sound of the workmen, striking stone and metal. The album has the romanticism and wistfulness you would expect from music inspired by Pre-Raphaelite art but there is more than that here.  I definitely recommend this as your Pre-Raphaelite soundtrack for the winter, especially if you need the comfort of beauty and gentleness in the rather rough present.  Add to your Christmas list now or better yet, buy a copy for yourself.

I was doubly fortunate enough to get in touch with Gordon and he answered some questions for me...

Q. When did you first discover the Pre-Raphaelites?

It was all down to my wife Hilary who had been an admirer of their work for many years, and showed me shortly after we had met a beautiful book from a Pre Raphaelite exhibitions she had attended. I instantly fell in love with those beautiful other worldly images, and when I saw the Holman Hunt "Light if the World" I recognised it from my childhood. That very image hung in my grandmother’s cottage, so in fact I grew up with that haunting image, never truly knowing anything about it.  It was like a home-coming for me when I saw these paintings and felt drawn to compose  pieces inspired by them, very much in the same way as Visionary way back in 1975. 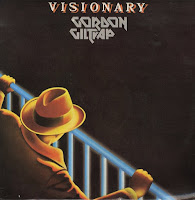 Q. I interviewed Robin Lawrie about his book illustrations for Tennyson in the 1960s and he said he saw a 'movement' of 1960s/70s Pre-Raphaelite musicians.  Would you identify with this?

In many ways yes, in relation to the Blake inspired Visionary album mentioned earlier where powerful images (I keep using that word) completely captivated me and in some way obsessed me and drove me passionately to compose a suite of tunes, but in Blake's case it was a mixture of poetry and paintings, once again with an other-worldly spiritual feel to them, but of course that was exactly what the great man was all about.


Q. Did you always want to write music around Pre-Raphaelite art?  Could it be seen as a (somewhat delayed) sequel to 'Visionary' (after the art of William Blake)? 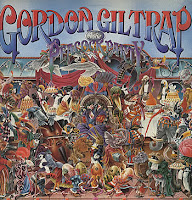 No, because I'm a relative later comer to the movement. I think in many ways with the new album it feels like a full circle from the mid-seventies to the present day, so maybe it could be described as a somewhat late sequel. In 1981 I released an album inspired by the illustrations of Alan Aldridge with The Peacock Party album, but I feel it pales somewhat in the light of this latest album, but then it would do, wouldn't it? And how marvellous to have one of the greatest images in English art as my album cover. It doesn't get any better than that, does it? I'm delighted it has had a vinyl release to truly show off the painting. I think a number of folk have bought it even without having a turntable on which to play it, and  just having it as a piece of art is enough for them, and indeed why not?


Q. How did you choose the paintings you wrote pieces for?  Were there paintings you would have liked to include? (I'm obviously angling for another album as I loved this one so much)

I simply chose paintings I could relate to like The Light of the World and Work with it's obviously busy, forward motion of honest labour and the street scene. The title track is so evocative and a gift for any composer to be inspired by, with the promise of a sea voyage and the underlying trepidation on the faces of the young couple. I don't think there are any other images that grabbed me as much as the ones I chose. Chatterton of course is such a tragic story and a challenge to try and capture musically that silent scene of death.

Q. Why orange vinyl?  And also thank you for orange vinyl, I got stupidly over-excited by it because I am old enough that coloured vinyl is massively exciting...

Pete Bonner from the record company chose the colour which matched a colour in the Millais painting.


Q. If you had to pick one, what is your favourite Pre-Raphaelite painting?

I love so many of them, but I guess it has to The Last of England. My second choice would be The Light of the World.

On a personal note, it is a small miracle that this album exists, because before getting ill in 2015,I had decided not to make any more albums, because I felt I had sort of said all I needed to say musically, but it was whilst recovering from my first lot of surgery that a thought occurred to me that I had already had an early incarnation of some of these pieces that formed part of an album I did with Rick Wakeman released about seven years ago. I felt then that the pieces deserved far more work than was put into them at the time.

I approached my dear friend and collaborator Paul Ward about coming on board and helping me to realise this dream of an album that stretches back to 1987 when I first started work on the suite, and now all these years on it exists. I'm truly humbled by the response the music has received, which I guess at its heart has a resonance of truth about it and for that I'm very grateful.

I thank you so much Kirsty for asking me to do this interview,it has been a privilege.

As a final note I want to thank my lovely wife Hilary for her constant support and inspiration without whom much of this music of mine would not exist, and it was due to her diligence and determination that The Birmingham Museum and Art Gallery has it gracing their gift shop!


Many, many thanks to Gordon and Hilary for their time and patience, and for making such a gorgeous album that I can't recommend enough.  Pop into BMAG if you are close enough but if not, it is available on Amazon.
Posted by Kirsty Stonell Walker at 16:47