The Mystery of the Dark Lady

I like finding out interesting stories to do with paintings and so was delighted to come across the subject of today's post.  As you will know, the long-suffering Mr Walker is curator at the Russell-Cotes Art Gallery and Museum, home to this painting...


As you will know from my previous post on Cowper, the artist was a Pre-Raphaelite follower, whose career reached into the middle of the twentieth century, when he seemingly continued to use the same style.  If you asked people to date The Fortune Teller, more likely they would guess Victorian rather than Second World War.  It is a very odd picture for many reasons, but I find it rather compelling, not least because of the implied tension between the two women (even if blondie is unaware of it) and the overwhelming detail of that ivy hedge.  Anyway, I didn't think any more about it until Mr Walker asked me to read a letter...


Cowper first exhibited at the Royal Academy in 1899 at the tender age of 22, so by 1940, he'd been showing his paintings there for around two-thirds of his life.  The Royal Academy exhibition of 1940 is often referred to as 'the Blitz Exhibition', owing to the fact that it occurred during the bombardment of London in the Second World War.  According to the Yorkshire Post of the 4th May 1940, Cowper's 'Fortune Teller' was a highlight in the 'brighter' show and describes it thus: 'It shows two fashionably dressed young women, a blonde and a brunette, seated in a garden, and a gypsy is telling the fair one: "Beware of a dark lady". The look on the dark one's face suggests some ground for the warning.'  On Sunday 5th May, Andrew W. Arnold of Tunbridge Wells, a notable collector of art and friend of Cowper, was one of the 30 or 40 people who braved the bombs to see the exhibition.

The Russell-Cotes Art Gallery rather liked the look of the painting and were about to ask for the loan of it but it had already been sold. Mr Arnold bought the painting, and a decade later offered it to the Russell-Cotes Art Gallery for their collection.  He was by this point in his 90s and possibly knew his time was limited so this might have been the reason to break up his collection.  Some of his paintings, 'modern pictures', seems to have been part of a Christie's sale in 1949 (catalogue reference 1949:22).  He did not place the Cowper picture in the sale, maybe because he was so attached to it.  The painting was offered first to Bristol Art Gallery, but they turned it down, so it was offered to Bournemouth, with some items of furniture, and it was that correspondence I ended up reading.


Mr Arnold gave a thousand guineas for the piece, which is around £40,000 in today's money, a fairly substantial amount for such a curious work of art, but Mr Arnold had a special reason for wanting the picture... 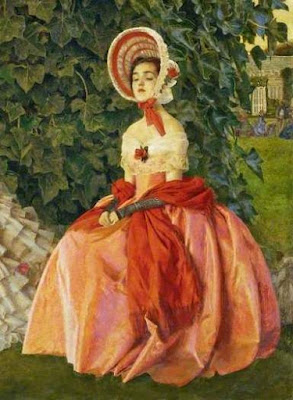 As Mr Arnold said in his letter 'Modern pictures are so awful that in recent years I have never gone [to the RA exhibition]  unless Mr Cadogan-Cowper tells me that he...had pictures in it.'  Well, there's a man after my own heart.  Not only that but he goes on: 'I shall be 92 next month and it is more than 60 years ago that I and the two girls in the picture had glorious fun at Brighton and Eastbourne.'

Mr Arnold, NOW you have my attention... 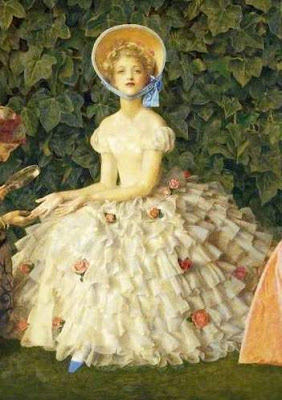 Mr Arnold is therefore describing people he met in the 1880s-90s, not some young, war-time girls that caught his eye.  He describes the dark haired woman as being 'very clever and had a beautiful contralto voice' (thank you Helen for being able to read this bit).  The blonde girl was nicknamed 'the golden butterfly', which is a wonderfully evocative name, and he had seen her again, after the First World War - 'She was a widow when I last saw her 30 years ago, her husband was a Colonel in the Royal Artillery.'  There is no hint as to when the husband had died, but given that the girls would have been around the age of Mr Arnold, therefore born in the 1860s, I'm guessing her husband could well have died outside conflict, being possibly too old to have died in the Great War.


Also in the file was a letter from Frank Cadogan Cowper, about the painting which offers a few other details. He reports that The Fortune Teller was declared 'painting of the year' and likened to the Pre-Raphaelites in the press, and that when the Academy closed its exhibition, it transferred down to Eastbourne Art Gallery to be part of their summer exhibition, in the town where Mr Arnold had 'glorious fun' with the models!


So, the puzzle I am left with is this - Mr Arnold was very attached to this painting and donated it to a gallery rather than sell it, even though it had cost him a fortune.  He obviously had fond memories of the models in the painting but here is the question: he remembers running around with them in 1890, before Cowper had really started to paint professionally, but the painting of them was not exhibited until 1940.

When and how did Frank Cadogan Cowper paint that picture?

There is much to recommend it being a painting from 1940: firstly, you are not exactly allowed to drag any old picture out of your attic and shove it on display as your picture of the year, and that would also beg the question of why Cowper hadn't displayed it over the intervening 50 years.  Also, the dresses, although worn with bonnets, are quite modern and much like ones worn by the various young women whose portraits Cowper painted in later years. However, the women were of an age with Cowper, so had he met them when young?  Had he made sketches of them and brought out those sketches when considering this work, sixty years later?  It's even not out of the question that Mr Arnold had photographs of the women he obviously remembered with such fondness and as he was friends with Cowper, maybe the artist had used the photographs as inspiration.  I want to know more!

Sadly, unless anyone has information about the Golden Butterfly and her beautiful-voiced friend, it will remain something of a tantalizing mystery...
Posted by Kirsty Stonell Walker at 19:22