This will be an imperfect review because I have tons of questions which I can't answer.  We can have a discussion afterwards, or over on my Facebook page, but firstly I will do my best to tell you what I think. Here we go then...

It all started when I received a review copy of the Tate's new exhibition Queer British Art 1861-1967. 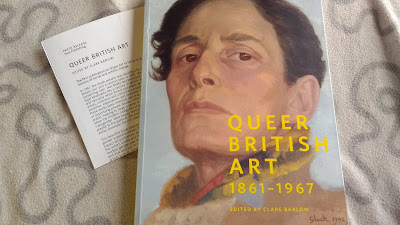 For those who didn't realise, 2017 marks the 50th anniversary of the decriminalization of sex between consenting gentlemen.  Before 1861, this could be punished by death and was charmingly lumped in with bestiality (we have Henry VIII to thank for that, making his laws after splitting from Rome).  In some ways, the removal of the death penalty in 1861 can be seen as a massive step in the right direction, but what followed was witch-hunt levels of hysteria around high profile cases.  Now, this is all just involving men, mark you.  Apparently women did none of this sort of thing until after the First World War (shortage of men?) which then caused parliament to try and criminalize lesbianism.  The House of Lords very sensibly refused to pass that because they felt women didn't know what lesbianism was.  Marvellous. With perfect timing, that decision was followed by the publication of The Well of Loneliness.


Anyway, I was always going to be interested in this exhibition, not least because of the timeline, and so with eager anticipation I awaited the catalogue.  Let's start with what I liked - it's a lovely size, which sounds like a strange plus, but being smaller than a traditional catalogue makes it more portable without sacrificing the quality of the images.  It is beautifully illustrated throughout and contains some fascinating works of art from people as diverse as Simeon Solomon, Gluck and Joe Orton, not to mention a delightful photo of Danny La Rue.


This is a collection where the art is brought together by the aesthetic proclivities of the artists which is an interesting way of juxtaposing otherwise disparate figures such as Edward Burra and Evelyn de Morgan, brought together because of the intellectual process of their art rather than the pictures themselves. In some cases this is a perfect moment to showcase the glory of their work.  Simeon Solomon was always going to be celebrated this year, and rightly so, as an artist and man who could not hide what he found beautiful.  His art keenly mirrored his sexual orientation and he was punished for it.  His work is brave and beautiful and it is wonderful to be able to see him in semi-isolation from the Pre-Raphaelites, away from artists who were not facing the same struggle.


Similarly, the beautiful boys of Henry Scott Tuke get decent exposure.  Tuke is one of those artists I regularly use here on the blog but I'm damned if I remember him being in an exhibition.  He crops up in provincial collections and on Summer-y greetings cards.  Definitely homosocial if not provably homosexual, Tuke's world is all male, all sunny, mostly naked. Like a queer Bob Ross, he did a set of elements and he did them well - water, light, young men, rocks.


An interesting inclusion in the exhibition is the story of Fanny and Stella, which some of you might be aware of, and their resultant trial.  A theatrical double act, Fanny and Stella seem to have been a more scandalous Hinge and Bracket, blurring their performance with their life, and getting arrested for being men dressed as women, women dressed as men, and inciting people to perform unnatural practices.  Due to the damn near impossibility to prove a person's sexuality unless you catch them at it, Fanny and Stella walked free from any jail time, possibly in their crinolines.


The catalogue seems to be on surer footing once it reaches the 1920s and the next 40 years are a catalogue of the who's who of Queer Britannia:  Virginia Woolf's dalliances with Vita Sackville West, who slept with who in Bloomsbury, the ill-fated partnership of Joe Orton and Kenneth Halliwell and the grimy canvases of Hockney and Bacon.  My favourite has to be Gluck, and her astonishing self-portrait...


I would have seen a complete exhibition of Gluck because her work is so striking and uncompromising, as is she.  She refused all prefixes to her name, threatening to resign when the Fine Art Society referred to her as 'Miss Gluck'.  Look at that face! I would have gone out of my way for Gluck.  However, that leads me to the problems with the exhibition and its catalogue...


It would be simple to do an exhibition that focused on a single queer artist or group.  This year could have seen a retrospective of Simeon Solomon, of Queer Bloomsbury, of my new best friend Gluck. These artists, with their uncompromising exploration of what it meant to be them, to feel what they felt, to be who they were, would be a fitting celebration of how far we have come in accepting that people are all different and as long as everyone is consenting it is all completely fine and gorgeous.  What the Tate has attempted however is a wider ranging view of art between that 1861 piece of legislation and the decriminalization of the 1960s (with its neo-Victorian interests).  The very obvious problems come with the artists 'outed' in the pre-First World War section, for example twice-married Sidney Meteyard and his Hope Comforted Love in Bondage. This work is included because 'the sensuous and ambiguous nature of this painting allows for queer readings' (p.36).  Similarities to Solomon's figures is noted in the figure of Love, and the fact that Hope is fully dressed led to some fairly strong hints that Meteyard was gay without any compelling evidence.


Similarly, by including Aurora Triumphans, it is inferred that de Morgan's repeated use of Jane Hale as model (seen on the right in the above) could be read as same-sex desire.  The same is implied about Laura Knight's famous self-portrait with her female model.  With de Morgan, no evidence is given for any sexual attraction between the artist and model, nor any named art historian having made the claim but there it is, or at least it is used to prove that people could say that sort of thing about that sort of painting.  This is jarringly lazy compared to the excellent work on Solomon, for example, and I feel cheapens or at least complicates the struggle of queer artists in a judgmental world.  If you want to explore the path of queer art in Britain from 1861-1967, why include artists who were arguably not gay?  If you want to explore the sexual-fluidity of the artistic muse, then that's a different matter.


The problem is that the earlier you go in the time period, the more likely artists are to hide their sexuality.  Imagine if Oscar Wilde hadn't gone to court over the subject, he might have been one of those people we hint about but as he was married with children his secret would have been safe.  When same-sex attraction resulted in prison, male artists were not likely to do anything other than conform, marry and paint naked ladies.  Artists like Solomon are rare because they make no effort to hide their sexuality, but then he was also operating within the framework of Aestheticism which celebrated androgyny.  I wonder why Edward Burne-Jones was not included in this exhibition, as his art was claimed by one MP of 'unmanning' him when he had to sit in Arthur Balfour's office surrounded by the Perseus cycle.  Burne-Jones makes you gay!  Surely that is good enough to include?


However gorgeous this exhibition is, the failing is that it tries to cover too many concepts.  It spreads itself over artists who were openly gay and art that can be used to explore ideas of queer attraction and in the end does neither well enough.  It seems a disservice to lump in people who have struggled to advance and expand the bounds of what is accepted in art with women who painted other women and men who painted nice looking men but showed no particular interest in sleeping with them. If we want to have a discussion about the relationship between artistic appreciation and sexual preference then brilliant, but that is quite a discussion to have. In the meantime, let's raise the profile of artists who have unfairly suffered due to love, who have been denied their rightful place in art history just because they fancied a person with the same frontal arrangement as them.  It's the least we can do.

Queer British Art 1861-1967 is on at Tate Britain now and here is the website, where you can buy the catalogue.
Posted by Kirsty Stonell Walker at 19:11